Raw-Smackdown DVD a good reminder WWE can be great

When the WWE’s retrospective of the last year’s best televised matches, The Best of Raw-Smackdown 2014, arrived at my home, I was not looking forward to watching the three-disk set. One evening I decided to pop in the first DVD and prepared for the worst, and to my surprise I found out that I was very wrong.

The seven-and-a-half hour long marathon of matches and promos was an amazing array of athleticism and talent that I just didn’t notice when I would lose interest in a three-hour Raw or even miss Smackdown. What I saw reminded me that the WWE has a lot of talent that works hard in the ring. 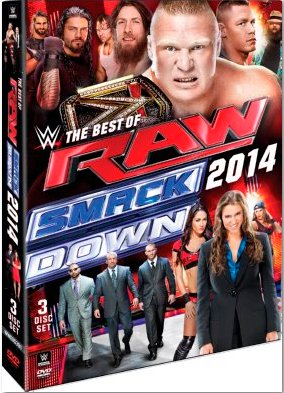 What shocked me the most was the quality of John Cena’s performances on the DVD set. Cena appears in five matches and performs really well as the hero who won’t quit and he is an amazing athletic talent. I have never enjoyed watching him until I had the opportunity to digest his matches without having the WWE force-feed Cena down my throat. John Cena can sell a beat down. Sure he finds a way to win, but he is fun to watch.

Another pleasing aspect of The Best of Raw-Smackdown 2014 is the look at the Wyatt Family and the Shield. These two groups of hungry young wrestlers performed their roles to perfection and they were devoted to their craft. You could sense just how much all six men wanted to grab the proverbial brass ring.

There are snap shots of other wrestlers that made the set a fun few nights of entertainment. Guys such as Cesaro, Sin Cara, Dolph Ziggler, Daniel Bryan, Goldust and Stardust gave the matches different flavours that I didn’t see the first time I watched them live. I even got a good laugh out of watching Stephanie McMahon and Vickie Guerrero’s mud pool match, which surprised no one with both women getting a dunk in the muck. McMahon really hammed it up when she seemed to be struggling to swim through the mud. Classic.

Two of my favourite parts of The Best of Raw-Smackdown 2014 were Paul Heyman’s introduction of Brock Lesnar as the WWE World champion and a look back at the “Yes” movement. Heyman masterfully and articulately takes the crowd on rollercoaster of emotions that lets the paying customer know that they are not as good as Lesnar. Daniel Bryan’s “Yes” movement was a lot of fun and reliving those moments made me realize just how much the WWE universe was behind the guy with the big beard and big heart. He came across to the fans as a guy who was one of them, who didn’t just want to dream big, but wanted to live big as well.

I highly recommend The Best of Raw-Smackdown 2014. It was fun to watch and is a great time capsule of the work of some of the WWE’s future mega stars.