When he answers his phone, there’s no mistaking the fact that he was a broadcast journalist; A damn good one, in fact. But Ken Resnick would never say so. He learned early on to never put himself over. When he was notified that Steel Domain Wrestling wanted to honor him with a lifetime achievement award at their March 14 show, he jokingly said, “I wanted to know what they thought I achieved!”

How did the down-to-earth Resnick become part of the crazy world of professional wrestling during the go-go ’80s, when the business became a national phenomenon, with Vince McMahon playing the role of a corporate raider? 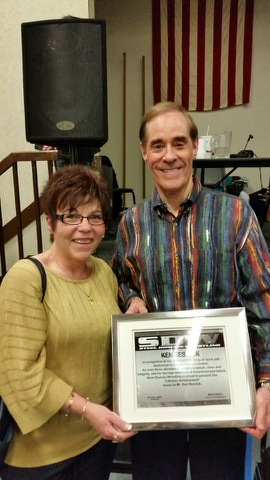 “I was doing sports on the six and ten o’clock news for the NBC affiliate in Rochester [Minn.], and I hosted an interview segment for a celebrity golf tournament. There were some very famous people involved in that-the cast of M.A.S.H. and Hill Street Blues, for example. Verne Gagne was there, and I interviewed him. At the party afterward, Verne and I talked. Then, two weeks later, I received a phone call at the station. It was Verne, and he wanted to meet for lunch. Gene Okerlund was going to work for the WWF and Verne offered me a job.”

Resnick accepted, and it turned out that he would have some pretty big shoes to fill with the departure of Okerlund, who had created an indelible persona of his own in the AWA. Okerlund left for the WWF just a few weeks later. How would Resnick handle the new role?

“Blackjack Lanza took me aside and said, ‘I’m going to tell you two things: Don’t try to be anybody else. Be yourself. The best way to get yourself over in this business is don’t try to get yourself over.’ With that in mind, I never tried to upstage anyone. I would either stay out of their way during interviews, or ask questions to help them build their character. Blackjack told me, ‘The boys and the fans will like you.’ Jack and I became really, really good friends. He has one of the best minds for the business I’ve ever been around.”

In fact, Ken Resnick credits Blackjack Lanza, with being a teacher and supporter in both the AWA and later the then-WWF, helping him get hired there in 1986. In an exclusive for SLAM! Wrestling readers, Resnick revealed, “Vince did not steal me away from Verne,” which is a misconception that continues to linger.

“I was done with the AWA after Wrestle Rock. It’s easy to remember because of the Wrestle Rock Rumble rap video that still haunts me to this day — it’s the gift that just won’t die!” Resnick laughs.

With plans of going back to work for Chrysler Corporation after leaving the employ of Gagne, Resnick recounts a phone call from Lanza, who had left the AWA for the WWF. “Jack called me after the show and I told him I had quit, I’m done. ‘Ah bullsh–,’ he said. I told him about my plans to go back to work for Chrysler, and he said, ‘Don’t do anything yet.’ We made plans to have breakfast the next day. And Jack called me again the next night about flying to New York as I imagine he must have talked to Vince the day after learning I had left [the AWA]. I called Northwest Airlines to verify his story, as Jack was not above pulling a good rib!”

So, what was it like, meeting Vincent K. McMahon at Titan Towers?

“I met with a series of people in the WWF offices that day. Jack disappeared within the first two or three minutes. I progressed from one meeting to another, with Terry Garvin, George Scott, and Pat Patterson. Finally, I met Vince. We talked for quite a while then he said, ‘Tell me about your moustache.’ He asked me when I grew it, and did it mean a lot to me, and then he said, ‘I hate facial hair!’ And he just sat and looked at me. We talked for another hour, and Vince stopped, looked at me for a minute, and opened up his desk drawer. He pulled out a razor and shaving cream, and said, ‘The bathroom is right through there.’

“I shaved off the moustache, and when I came out, Vince said, ‘You showed me something. When you say something, you back it up!'” Resnick reminisced.

When asked what it was like to go from the AWA to the WWF, Resnick is reflective.

“I was lucky to learn from [Bobby] Heenan, [Nick] Bockwinkel, Crusher, and Blackjack in the AWA. The talent there was phenomenal. But when I went to the WWF, I learned so much about production and preparation. So much of that came from Nelson Sweglar, who was Vice President and executive producer of WWF television. He now executive produces boxing for ESPN and CBS Sports among others, and I’m very happy we’re still friends to this day. In all the time I was in the AWA, we never had a formal production meeting. In the WWF, we had extensive meetings. They were producing numerous programs each week, and were trying to motivate the viewer to make a certain purchase, and the preparation and focus were unbelievable.”

Resnick has fond memories of the AWA and mentioned working with The Crusher, who he considered a maestro on interviews, and a great guy to know. “I was giving The Crusher a ride to the airport, and he was asking me where I grew up, and asked about my parents. I told him my mom was the administrator of a nursing home, and that 95% of the TVs there were tuned into wrestling when it was on. Crusher asked me, ‘Where is the nursing home? Let’s go see the patients and cheer them up.’ When The Crusher walked into the dining room, words cannot describe the absolute euphoria that came over the patients. That was just him.” 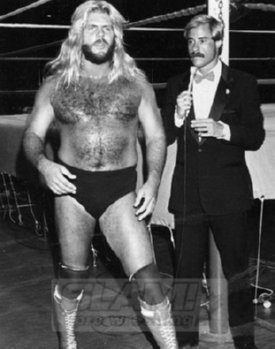 Another elderly fan of The Crusher was none other than the President of the United States, Ronald Reagan. Resnick explains that he was to emcee an event in Wisconsin — The Crusher’s home state — that the President was appearing at. He invited The Crusher to attend. But “The Wrestler Who Made Milwaukee Famous” was hesitant, at first. “I asked Crusher why, and he admitted, ‘I’m not gonna go. I wouldn’t know what to say to him!’ I finally convinced him to come, and when The Crusher met him, Reagan said, ‘Crusher, I can’t tell you how excited I am to meet you!’ Crusher was such a talent. He would say, ‘You start the interview and I’ll follow.’ He was one of those I was always excited to interview.”

Resnick shared his thoughts about the landscape of programming in today’s WWE. “I marvel at what they’re able to do from a production standpoint. In terms of interviews, the talent really doesn’t do them anymore. Everything is so scripted by creative; the talent tries so hard to remember exactly what they’re supposed to say that the spontaneity and passion has been taken out. Roman Reigns is not a great talker,” Resnick said, adding, “If they still had the old-style interviewer to work with him, it could get him over more. Now it seems like he’s trying so hard to remember what to say, he doesn’t remember how to say it.”

There’s at least one member of the current WWE broadcast team whose work Resnick respects. “When I watch Michael Cole, he has so many things he has to make sure he hits. I really admire him. When I did play-by-play that was my only job. We had headsets on but other than a cue, they weren’t talking to me. I’m sure over half the time he has someone in his ear. I give him all the credit in the world.”

As he reflects on his time in wrestling, Resnick is grateful, and humbled to be honored with a lifetime achievement award. “This is as special as any award or recognition I’ve gotten. Steel Domain Wrestling is one of the great independents. They’re still old-school. Without the indies and fan support young guys today wouldn’t get the chance to get noticed.”

One thing is for sure. Ken Resnick was certainly noticed and appreciated by wrestling fans worldwide. With or without the moustache, he’s a class act.