The Streak: CM Punk is the final victim 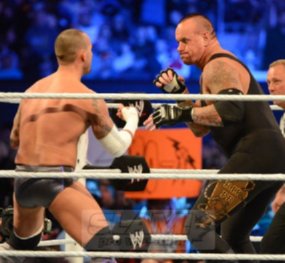 CM Punk faces off with The Undertaker. Photo by Mike Mastrandrea

In 2013, it seemed like Punk had everything going for him. He certainly had a lot of momentum heading into that particular WrestleMania match. Not only was he coming off of the most impressive title reign in recent memory, but he also had one of the greatest managers of all time, Paul Heyman, in his corner, and he had the rock band Living Color perform his entrance music on that grand stage. In addition to that, Punk’s opponent, The Undertaker, had not wrestled a match since the previous year’s WrestleMania. So how could CM Punk not be overconfident?

Regardless of all those things, Punk’s confidence may have been completely shattered the moment that gong went off, and the zombies started to rise, signaling the entrance of The Deadman.

Punk tried to get a little of that momentum back by opening things up with a thunderous slap. But if looks could kill, then the look that Taker gave Punk after that first move would have surely put Punk six feet underground.

The match started off as kind of a cat-and-mouse game, with Punk playing defense for the most part.

In the latter stages of the match, Punk started using a lot of his MMA training, going both high and low, to try and confuse The Undertaker.

Taker was doing quite well, up until the point where he tweaked his knee, which Punk took full advantage of.

Punk dove off the top rope with a flying elbow drop, landing on Taker, and crashing through the Spanish announce table. Normally, a move like that would have secured victory, but this wasn’t any normal opponent.

The match was taken to the ground from there, with each man utilizing his signature submission hold. Taker first applied Hell’s Gate, but Punk was able to counter into a jackknife cover for a near fall.

Punk later applied his hold, the Anaconda Vice. Taker refused to submit, but the pain was enough to put both of his shoulders on the mat. Punk was hoping for a pinfall at that point, but Taker sat up at about two and a half, and the two combatants were literally nose-to-nose, as Punk still had the move applied.

Punk’s submission hold didn’t work, so he decided to go for his other signature move, the Go To Sleep. But all that did was cause Taker to bounce off the ropes and then rebound with a Tombstone piledriver. But Punk, to his credit, was able to kick out at two.

As Punk went for his running high knee in the corner, Taker caught him, and attempted the Last Ride. But Punk was able to think quickly, as he grabbed the urn from Paul Heyman, and used it as a weapon, while the referee was temporarily down.

In the closing sequence of the match, the two combatants went counter-for-counter. Each man tried his finishing move, but in the end, it was Taker who ended up hitting the Tombstone for the final three count. 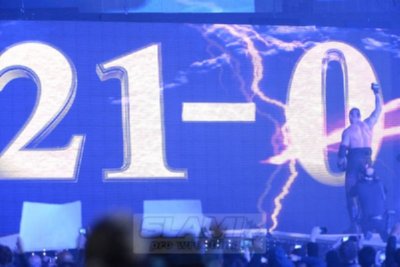 We didn’t know it would be the end of the streak when he left MetLife Stadium. Photo by Mike Mastrandrea

As good as CM Punk was, he just wasn’t good enough on this night, and against this opponent. In fact, this loss was so devastating, that it caused Punk to take a two-and-a-half month break, to sort of recharge his batteries.

The Undertaker left MetLife Stadium with a perfect 21-0 record at WrestleManias. We wouldn’t know until a year later, when Brock Lesnar ended The Streak, that perfection had left the building.