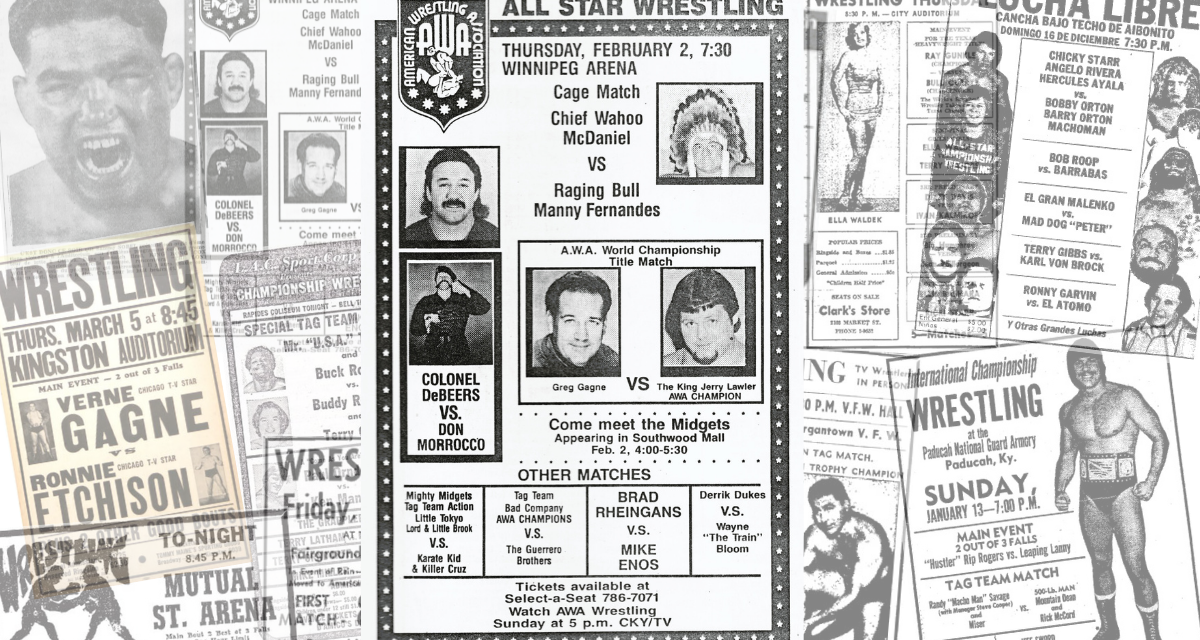 Many probably don’t know, given how long Chris Jericho has been on top in professional wrestling, but he actually went to school to study journalism.

Like all J-school students, the idea is to hustle and get your name out there. Jericho ended as a “stringer” for the Winnipeg Free Press newspaper, starting in 1989.

Naturally, there are a few pro wrestling cards that he covered, like the AWA show detailed below.

The biggest report Irvine had was on Friday, February 2, 1990, where he covered a standing room only show at Club Taboo where the TV taping for West Four Wrestling Alliance was done. The WFWA primarily had Tony Condello as its promoter, with Fred May paying the bills, and picked up a lot of Stampede Wrestling talent — and briefly its national Canadian TV spot on TSN — after Stampede closed its doors.

Jericho even got a quote from Baron Von Raschke at the WFWA show: “It’s good that he (Condello) is trying to harvest some talent. Maybe he can start a new national circuit. I sure would help because as it stands, there aren’t enough places to work. I wrestle full-time, but to make ends meet I’m a substitute teacher and a real estate man.

But “Chris Irvine, For the Free Press,” also covered non-wrestling events in 1990, like a big feature on rugby in Winnipeg, the Famous Fitness Fashion show at Portage Place in April 1990, soccer’s Winnipeg Indoor Association, local basketball star Bob Heighton, and even racquetball.

Now, on to the card. 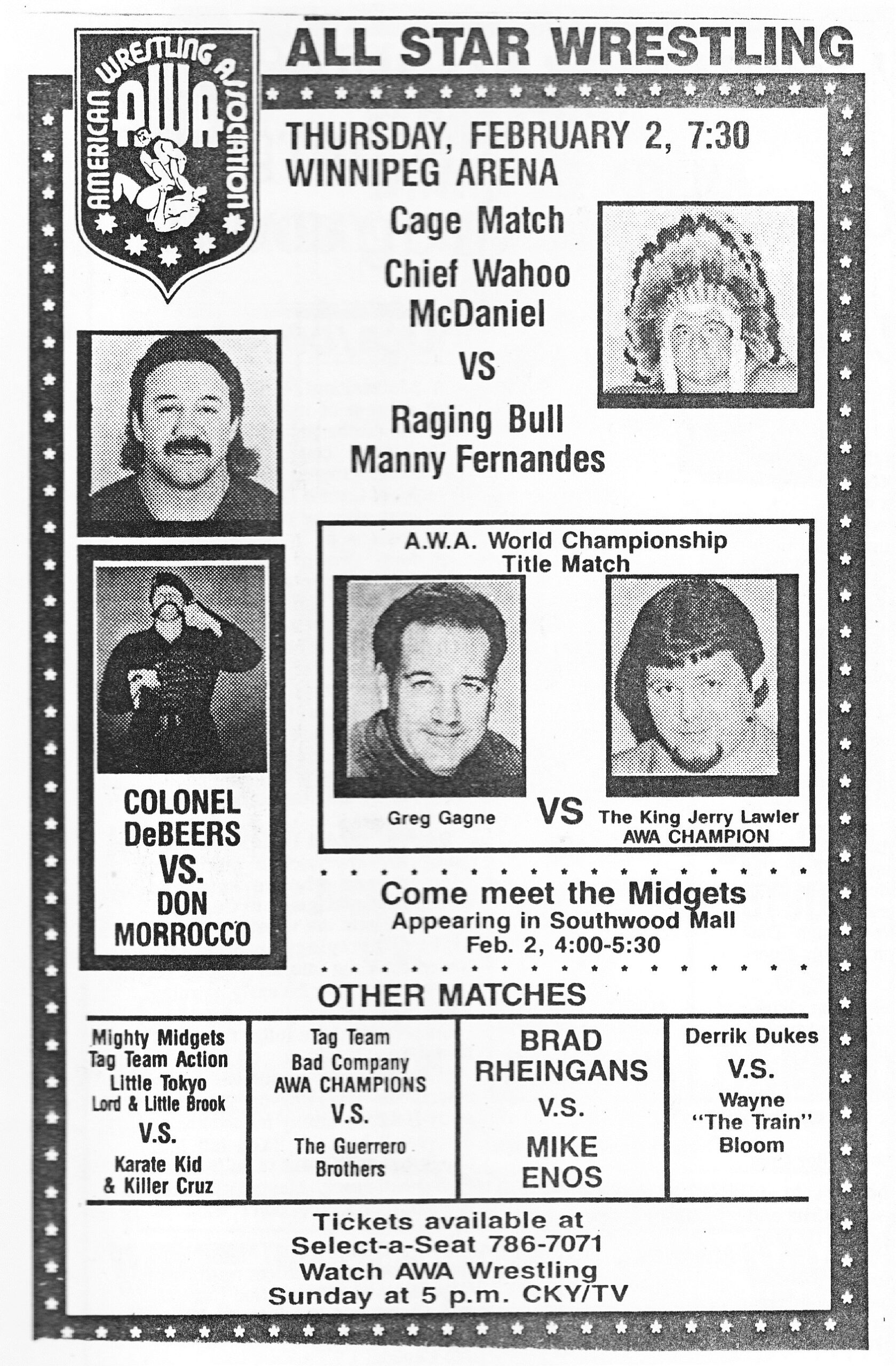 Derek Dukes vs. Wayne Bloom ended without a winner as a time limit draw

Derrick Dukes (and the various spellings) was a great hand out of Minnesota, who trained under Eddie Sharkey, and he just never got a break in a bigger promotion. Irvine noted he was known as “Starfire” in his write-up in the Free Press. Wayne Bloom was half of the Destruction Crew / Beverly Brothers tag team with Mike Enos.

Brad Rheingans was a former US Olympic wrestler, who, by this point was a part-timer, that also had a “finishing school” where wrestlers truly improved. Check out our interview with Rheingans.  “Mean” Enos teamed with Bloom. Irvine noted it was a short bout.

Ed Wiskoski was brilliant as DeBeers, playing on the tensions over South African and apartheid. Wiskoski once wrote a column for this site. “Terrific” Tom was early in his career at this point, and went on to a brief time in the WWF and then the NWA. Zenk died in December 2017.

The midget match was a mismatch, wrote Irvine, as “Cruz and the Kid humiliated their opponents by turning them against each other.” Not much is known about Killer Cruz, but the other three little people had long careers. The Karate Kid was Chris Dube, who was the son of Littlebrook (Eric Tovey), and it was Littlebrook that booked the little people across the world; he died in September 2016. Little Tokyo (Shigeri Akabane) was one of the trainers at Littlebrook’s place in St. Joseph, Missouri, and died in September 2011.

Of note, Gagne was the AWA World TV champion at the time and it was a non-title bout. Gagne was, of course, the son of Verne Gagne, which was a tough legacy to live up to. Be sure to check out our Gagne archive of interviews and stories. As for Larry Zbyszko, he was always great on the microphone, and may have been the best “staller” in wrestling history. Like with the Gagnes, we talked with Zbyszko many times through the years.

Results on their own don’t always tell the whole story, so fortunately, Irvine noted, “Controversy arose however, when Diamond made an illegal pin on Hector Guerrero.” Badd Company would only be the champs for another month and a bit, losing the tag titles to The Olympians (Ken Patera & Brad Rheingans) on March 25th. Tanaka is still involved with wrestling today, training wrestlers, and Diamond was a professional soccer player who got into wrestling. The Guerreros had been wrestling for years and years by this point, and Hector would go on to become primarily a commentator, while Chavo got a good run in the WWE alongside his son, Chavo Jr., as Chavo Classic. Chavo died in February 2017.

This was a rematch after the two battled to a no contest in the main event at the previous AWA show in Winnipeg, on December 26, 1988 — also promoted by Condello, and also a bust. “Special referee AWA ex-champion Verne Gagne tried to keep control but the cage took its toll on both men, leaving them cut open and bloodied,” wrote Irvine of the cage match. Wahoo was almost certainly the booker of the AWA at the point this card took place, and the former football star — interviewed here in 2000 —  died in April 2002. “The Raging Bull” Manny Fernandez continues to make wrestling appearances these days at conventions; prior to this AWA run, he was a NWA World tag team champion alongside Rick Rude, with Paul Jones as their manager.

Looking at the advertisement in the newspaper, “Don Morrocco” — or Don Muraco — was not on the show, nor was AWA World champion Jerry “The King” Lawler.

These weren’t the dying days of the AWA, but they weren’t far off. The promotion was struggling, and the Winnipeg Arena (torn down in March 2006) just was too big a venue for the company at the time. This was the last show that the AWA did in conjunction with Tony Condello, and the AWA never returned for a show there — or Winnipeg.

EDITOR’S NOTE: We hope to continue “Card Exam” as a semi-regular feature so let us know what you think by leaving a comment below!