Midget wrestling star Little Tokyo (Shigeri Akabane), who died today of a heart attack in St. Joseph, Missouri, at the age of 71, was making his friends laugh right to the end.

Just yesterday, Bill Howard went to the hospital to visit his buddy, who he first met when Little Tokyo came to Kansas City, Missouri, 40 years ago. 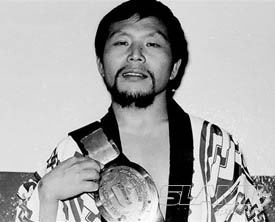 “He was in great spirits. He and I were laughing and joking around,” said Howard, recalling the conversation, impersonating Tokyo’s gravelly voice.

“You’re like the Little Emperor sitting here, everyone waiting on you,” said Howard.

“I’ve got TV. I’ve got three meals a day. The nurses wait on me. And they give me good drugs, so I can go to sleep,” replied Akabane.

While Howard was there, a doctor came and said that he was discharging Akabane Tuesday, as the rashes he had developed while fighting a second round of leukemia had cleared up.

Then, on the morning of September 6th, while getting up to use the bathroom, Akabane suffered a heart attack and never recovered.

Akabane grew up in the Nerima district of Tokyo, with two brothers and two sisters of normal size. His father was a glass blower, who owned a small factory with his brothers. Akabane excelled at judo, and at a tournament, met Yoshio Tamaie, a wrestling promoter who had brought North American midget wrestlers to Japan. He trained and debuted in Japan, where only a handful of other native midget wrestlers had been trained.

One of the touring midget stars, Lord Littlebrook (Eric Tovey) met Akabane, who wrestled under his real name, but was still seen as a lower-class wrestler by the establishment, carrying the bags of the stars.

Littlebrook’s son, Little Kato, shared what he knew of their meeting. “They couldn’t communicate by language, but they could communicate with their eyes. My dad took a liking to him, and, after going over there a couple of times, my dad asked him if he wanted to come to the States and wrestle.” 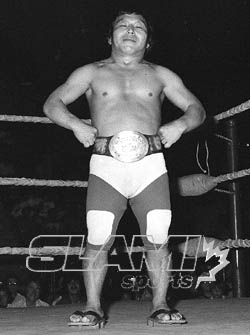 Little Tokyo strikes a pose while in Stampede Wrestling. Photo by Bob Leonard

On tour with the troupe of midgets, Akabane got to see North America.

Howard remembered first meeting the 4-foot, 98-pound Akabane in Kansas City, acting the part of the tough guy in the dressing room. “He looked at everybody like he was the toughest son of a bitch in the world. He spoke no English and you’d look at him, and he’d give you this mean look, and you’d go, ‘Holy shit.’ Years later, I was talking to him about that, and he said, ‘You know why? Cause I was scared.’

Manager/wrestler Percival Al Friend met Little Tokyo in Calgary, but got to know him better when he was based out of Kansas City, and Akabane lived in nearby St. Joe.

“There was never, ever an unkind word, from anybody, said about Little Tokyo,” avowed Friend. “The funniest guy you’d ever want to take and meet.” 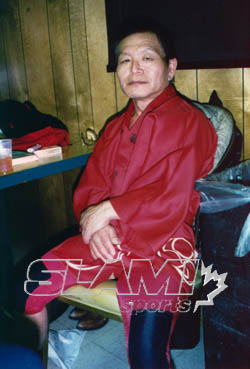 The old friends reunited a few years back at the home of Lord Littlebrook’s daughter, with Littlebrook suffering from Alzheimer’s and unable to do much.

“[Akabane] came by with Little Bobo Johnson, and we had a wonderful afternoon,” said Friend. “I really, really enjoyed the day. When I got ready to go, he came over and gave me a big hug. He said, ‘I want to see you again, my friend.’ I said, ‘I hope.’ Now I guess I’m going to have to wait.”

Diane Devine, a Denver-based superfan/promoter, won plane tickets to anywhere in the U.S. a few years back, and cashed in the prize to go to Kansas City and St. Joseph to visit the midgets, hooking up with her friend Bob Verhey.

“Little Tokyo came over to meet Bob and me and we went out for lunch at Cracker Barrel in St. Joe,” said Devine. “Had a wonderful visit, Tok had a huge pick up truck he showed us. He was a dear friend and we kept close in touch. I spoke with him several weeks ago. I guess the last visit would be my best memory as we were together.”

Little Kato was trained by Tokyo to be a wrestler 25 years ago, just as Akabane trained many of the midget stars from Littlebrook’s troupe.

“Tok was my dad’s trainer. The promoters called my dad for the midgets. My dad went down there once in a while and would observe, but Tok’s the one that went down there and trained all of us,” said Little Kato, who praised Akabane’s talents.

“To me, I’ve been in it 25 years, I’ve seen some of the great ones, such as my dad, Lord Littlebrook, and I’ve seen videos of Sky Low Low and all them, personally I think Little Tokyo is the greatest midget wrestler ever, right up there with my father,” said Little Kato. “My father did the backflips and stuff, the acrobatics. Tokyo, with his judo background, just everything. Tokyo and my dad were the best midget wrestlers ever. Tokyo was definitely right there. He was awesome.” 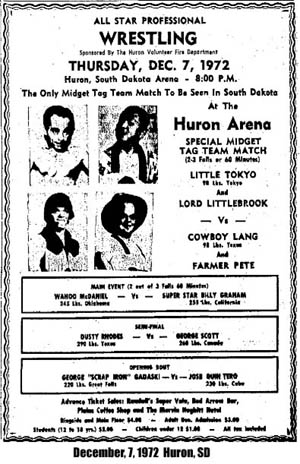 Little Tokyo was a big star across North America, holding the midget version of the World title for a time. His biggest profile appearance was at WrestleMania III in a mixed tag team match with Lord Littlebrook and King Kong Bundy against Hillbilly Jim, the Haiti Kid and Little Beaver.

It wasn’t long after that 1997 bout that he called it quits. In an interview with the Whatever Happened to … newsletter, Littlebrook said, “Little Tokyo still lives here in St. Joe. He’s retired. He said, ‘It’s getting to be too hard on me to take the bumps.'”

Danny Campbell, who works as Lil Nasty Boy, professed his appreciation for Little Tokyo. “I love that guy. He’s the hardest midget I ever worked with. He could never be serious. He’d just have it down so pat. He’d make me burst out laughing when I was in the crowd, just from his actions, his character, and his facial expressions. It would be hard to maintain professionalism with him. He taught me a lot that way, he taught me how to be a professional, not burst out laughing and go out of character.”

Howard continued to laugh at the memories of Akabane.

“There was nobody better than him. Everybody liked Little Tokyo. Everybody,” said Howard, launching into a story.

“They took him one time to a carnival in Des Moines, JJ Dillon and Buzz Tyler, if I’m not mistaken. There’s Little Tokyo with a mustache, smoking a cigarette, and they got him in at the kids price.”

Akabane was divorced and living on his own. He was predeceased recently by a son who was training for the Boston Marathon and had a heart attack. A daughter lives in San Diego, and another son in Hawaii.