Paul Diamond went from soccer to the ring 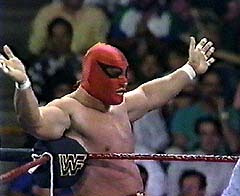 Tom Boric as Kato in the WWF.

There are two Paul Diamonds in our Canadian Pro Wrestling Hall of Fame.

This is about the later-day Diamond, one Tom Boric, from Croatia, who came to Canada with his family and grew into a professional soccer player.

Wait a minute! A soccer player?

Yep, before Tom Boric became Paul Diamond in the ring, he was a regular with the Tampa Bay Rowdies of the old North American Soccer League from 1982 to 1984.

When the NASL folded, Boric got his green card, and decided to learn the mat game from the Malenkos in Florida.

To summarize his in-ring days, one would say that Diamond was there for the beginning of a few great careers, but was never a huge star himself.

His first big success came teaming with a young kid in Texas whose real name was Michael Hickenbottom. The team was known as American Force, and won the Texas All-Star Tag Team belts in 1985.

Though the team didn’t last that long, it was hardly the last time the two youngsters saw each other.

Diamond took to the road, and met up with Pat Tanaka. Something clicked and Bad Company was formed. Together, the tall Diamond and short Tanaka created havoc in the Memphis CWA promotion, and in 1987, Badd Company beat Jeff Jarrett & Billy Travis for the Southern tag titles, later losing the belts to The Nasty Boys, Jerry Saggs & Brian Knobbs.

The CWA was then affiliated with the American Wrestling Association (AWA), and Bad Company moved up to the bigs. There, they found a rookie manager who was ready to give them real “bang” for their buck. Diamond Dallas Page lead Bad Company to the AWA world tag titles over Diamond’s old Texas tag partner, Shawn Michaels, who had been teaming with Marty Jannetty as The Midnight Rockers. Tanaka and Diamond would lose the tag belts to The Olympians, Brad Rheingans and Ken Patera.

Tanaka and Diamond – who was usually billed from Thunder Bay, Ontario – split shortly thereafter, and they feuded for a while. Tanaka found a new partner in Akio Sato, and the team was called The Orient Express, and they later moved on to the WWF.

As the AWA collapsed, Diamond headed to the WWF to re-team with his old partner, Tanaka, under a mask as Kato in The Orient Express (Sato having left the team).

Diamond stuck around the WWF for years, usually under a mask as either Kato or Max Moon, but he was never close to being a main eventer.

Since his departure from the WWF, Diamond has been wrestling in the indies throughout the U.S., including Music City Wrestling in Tennessee and ECW.