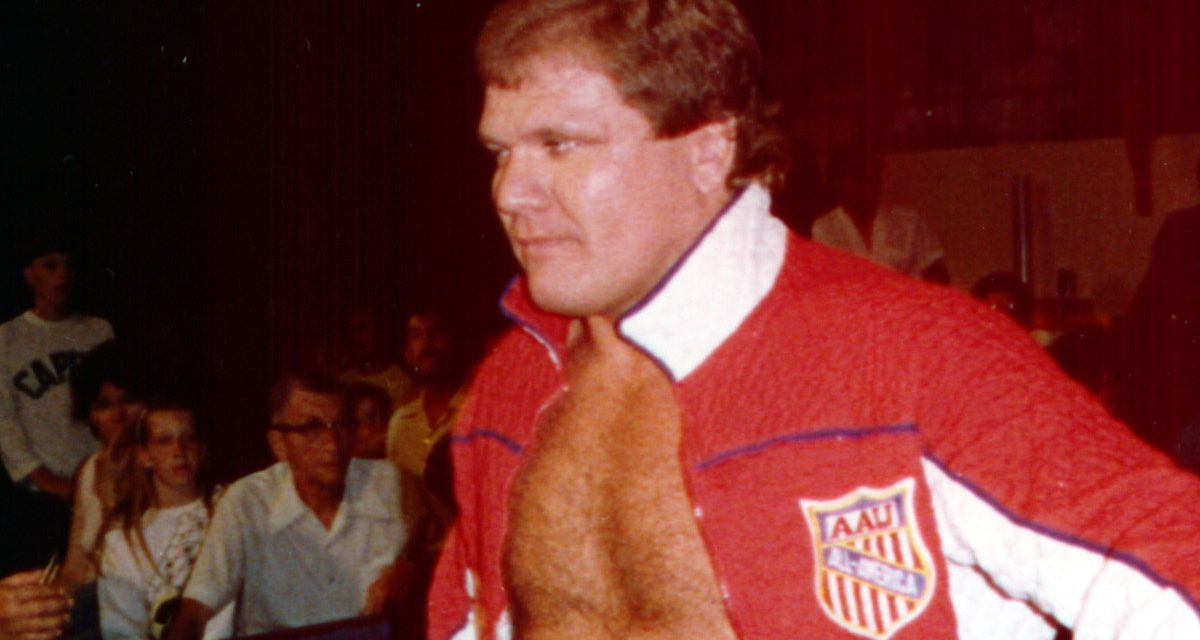 Brad Rheingans knew he was in over his head. Just a short while into his pro career, after the disappointment of the 1980 U.S. Olympic boycott, he found himself in Anchorage, Alaska harnessed in for the dreaded Alaskan Sled Dog match. Across the ring was an aging, but still dangerous, “Big Thunder” Gene Kiniski.

“It was early in my career, and I was nervous anyway. Everyone’s telling me about this Gene Kiniski that would just as soon give you a knuckle sandwich as shake your hand,” Rheingans told SLAM! Wrestling recently. For the Alaskan Sled Dog match, each wrestler gets tied up in leather just like a sled dog would be, and then the combatants are attached by a five-foot long strap.

“I’m used to armdrags and bodylocks and headlocks and leapfrogs, and all of a sudden, I’m wrapped up in leather goods here,” he laughed. But Kiniski, in his first meeting with Rheingans, was a true professional. “Gene came through with flying colors. He’s the one that had all the experience.”

Rheingans was recently reunited with Kiniski at the induction ceremonies for the George Tragos/Lou Thesz Professional Wrestling Hall of Fame in Newton, Iowa, where both were a part of the Class of 2004. 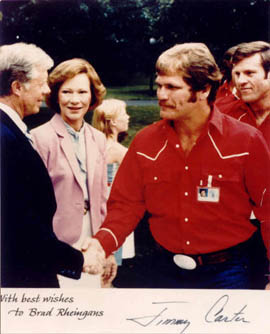 But Rheingans isn’t really the type of guy to get all worked up in his feats. He’s an admitted loner, who found success in one of the most solitary of sports out there – amateur wrestling.

A native of Appleton, Minnesota, a small mid-western town located in western Minnesota just 20 or so miles from South Dakota, Rheingans credits his brother, Bruce, for both tough love and eventually convincing him to truly give himself to the amateur game.

“The biggest influence on me getting into amateur wrestling was my brother. He was two years older than me and he was wrestling. When he came home, I had no clue about wrestling at all,” Rheingans said. “My brother would come home after his wrestling practices and he’d work me over on the living room rug. I’d pretty much come away with knee burns, burns on my forehead. I vowed that I was never going to do that, never get into wrestling because I couldn’t stand it. I had no control over what was going to happen. My brother had the experience. Shoot, I knew I was stronger than him but he just knew too much. I was kind of disillusioned there on the living room carpet.

It turned out to be true. While Rheingans excelled in football at high school, where he was co-captain of his 1970 high school football team and voted MVP, he did even better in discus and shot put, and, of course, wrestling.

“In a team sport, you can always blame somebody else, whereas in a wrestling match, you’re the only one out there either to fail or succeed,” he said.

To this day, nothing he did on the mat or in the pro ring compares with his first state title in high school. “The most exciting time in my amateur career was when I went from Appleton, Minnesota, which is basically way out in the middle of nowhere and I went to Minneapolis and I won my first state title.”

His success in high school led him to North Dakota State University, where he was a four-time NCAA All American and NCAA Division II champion. One of his coaches at NDSU, Jim Duschen, convinced him to give Greco-Roman wrestling a shot and therefore open up the Olympics as a possibility.

He had to go to the Minnesota Wrestling Club for training. “I was starting all over again. All of a sudden, here’s people flying through the air, getting gutwrenched across the mat. That wasn’t something that I was used to, but I knew I wanted to do it because it was a physical sport, and I liked things that were physical. It was always a challenge to do something different,” he said.

The head of the Minnesota Amateur Wrestling Club was Alan Rice, who was also the U.S. Olympic coach in 1972. He brought in other top amateurs from Poland, Russia and elsewhere to compete and train. “You couldn’t help but get better because all of a sudden you’re training with the best people.”

After making it through the tough Olympic trials, he made the squad for the 1976 Olympic Games in Montreal. Rheingans finished fourth at 220 pounds in Greco-Roman. “I actually beat the guy who took the bronze medal [Andrzej Skrzydlewski of Poland]. I beat him in the third round.” Under today’s scoring system, Rheingans would have been in the gold medal match.

His fourth place finish doesn’t haunt him at all. He can’t say that for 1980, however.

“I haunts me that I didn’t get a chance to do it in ’80. That was my peak. I had knee surgery right after the World Championships in ’79, which I did win a bronze, then I got the knee surgery and my knee was just like day and night. I was ready,” he said. “Ironically, the two that took second [Roman Bierla, Poland] and third [Vasile Andrei, Romania], I’d beat the year before in the World Championships, then they got second and third in the Olympics and the Bulgarian [Georgi Raikov] won it.”

At the time, he agreed with U.S. President Jimmy Carter’s decision to boycott the Games in Moscow as a protest of the Soviet invasion of Afghanistan. “I thought it would bring world peace. I was going along with Jimmy Carter. … If something like that would have made a difference in world peace, I’m for it, no matter what. Everybody should be for it if it’s going to make a difference … the war just escalated, the embargo went on, the farmers suffered, the athletes suffered. It didn’t do anything. So I was a little disappointed, but I wasn’t the only one.”

Rheingans got one more crack at the Olympics, this time as an assistant coach in 1984 at the Los Angeles Games.

Back in 1976, he met the man who would set his future in motion as a pro wrestler, Verne Gagne. It just happened that Rheingans had been a fan of pro wrestling growing up, idolizing those who had legit backgrounds like Gagne, Mad Dog Vachon and Baron von Raschke.

“I met Verne Gagne up in Montreal. He was up there watching the Olympics. I met with him afterwards. He was very nice, very respectful. We had a talk and asked if I’d ever considered pro, and I told him that’s what I really wanted to do. But I told him that I still wanted to go and win a medal. I had a chance to go pro in ’76, but I thought, ‘Doggone, I came so close to getting a medal in Montreal. I want to be the first American to win a medal in the Olympics,'” Rheingans said.

Gagne and Rheingans stayed in touch over the next four years, and Gagne gave money to support the Olympic wrestling program and would have the team on his AWA Wrestling program.

After the boycott in 1980, he decided to make the jump and put about a month into training with an old college teammate in New York — Bob Backlund. “Bob was a good friend of mine. He was actually a senior at North Dakota State when I was a freshman. So I got to know him pretty well. At the time, he was WWWF champion. He kind of broke me in there for about a month. I didn’t wrestle any matches, I just went through the training. Then I came back through Minnesota and went through Verne’s camp for about two or three more months. After that I had my first match.”

Rheingans worked for the AWA for about five years, his biggest claim to fame being a part of The Olympians tag team with Ken Patera that claimed the tag team title. “Anytime you win one of the belts, that’s the pinnacle.”

He learned a lot during his career from Gagne, Tito Santana and Rick Martel. Others like Baron von Raschke and Mad Dog Vachon, even if their styles hardly meshed with his clean-cut, All-American persona, helped too. “They all had a different perspective because they all had different gimmicks, they all had a different presentation in the ring. Obviously Mad Dog wasn’t going to go out and start shooting fireman’s carries and body blocks.”

After his AWA run, he went up to the WWF as a favor to his friend, Hulk Hogan. “When I went up to WWF, I was going in there to do a camp for Hulk Hogan. That was the whole purpose for me going up. He wanted to do this dream camp, this Hulk Hogan’s Dream Camp and he wanted me to run it. …. He said, ‘Well, c’mon in. Vince will keep you busy, he’ll keep you on the payroll and you’ll wrestle some matches and when the time is right, we’ll do this camp.’ After about six or seven months, Vince sent me a nice letter and said, ‘We just don’t have time to do that right now. We’re involved with this other stuff, WrestleMania. If and when we do it, you’re going to be a big part of it.”

The experience of planning the camp, even if it didn’t come to pass, would help Rheingans down the road. He had broken his wrist near the end of his WWF stint, and took some much-needed time away from the ring.

Then Antonio Inoki and New Japan Pro Wrestling came calling. Inoki had big plans for a Russia vs Japan vs USA concept, made up of pros who had amateur backgrounds, and he wanted Rheingans to be a part of it.

“I started wrestling for Inoki, spent quite a few tours over there and wrestled continuously. We did that thing with some of the amateur wrestlers from Japan and Russia, some of the world champions from Russia, we worked with them and trained them,” he said. “Then my knee — my knees were bad anyway. They’d been banged up so many times. All of a sudden, I just couldn’t take it anymore. I told Inoki and Saito, my knees, they’re way overdue. So I had my first knee replaced in 1995 (right), and I had my second (left) one in 1997.”

Rheingans was smart with his money, and invested well. Now at 50, he says he’s about 85% retired, planning on more fishing and hunting in his native state.

He has been running the World Wide School of Professional Wrestling in Hamel, MN as a place for real prospects to try to make it. Rick Steiner, The Nasty Boys, The Beverly Brothers, Big Van Vader, Scott Norton and Brock Lesnar are all graduates of his training.

After his knee replacement surgery, he was kept on by New Japan as a booking agent, and has been with them now for 17 years. Rheingans was the guy who put together the business plan between WCW and New Japan and brought them together; for about six years, he’d be the guy calling the WCW offices to arrange a wrestler’s participation in a New Japan tour.

Rheingans is pretty content with the way it all worked out. Capping it off with his recent induction into the George Tragos/Lou Thesz Professional Wrestling Hall of Fame seems to fit. “It’s the biggest honor you can have, it’s the highest honor,” he said. “It’s not just about the awards, or the medals or ribbons and championships and that stuff, it’s about what you’ve acquired from these people in terms of stories that have inspired your life or motivated you.”