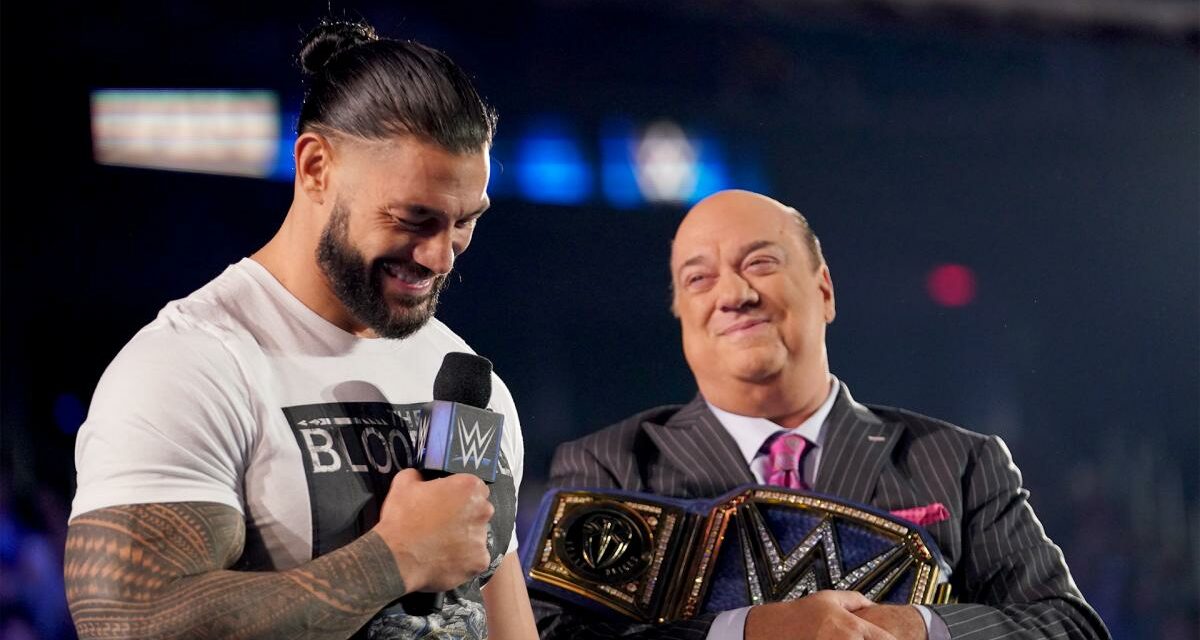 Black Friday has come to the WWE, and SmackDown’s special event is an invitational Battle Royale which will grant the winner the number-one contendership to Roman Reigns’ Universal Championship.

Kayla Braxton is in the ring to lead us off, but before she gets much out Reigns’ music hits and he heads to the ring with Paul Heyman in tow. Heyman brushes Braxton away, stopping her from talking about Brock Lesnar’s rumoured return by awkwardly telling her that he used to like her because other people thought she was pretty (huh?). Heyman allows Reigns to have to the mic to tell us … nothing new. He has beaten everyone on SmackDown, he is happy to beat whoever wins the Battle Royale tonight, and he is proving himself to be the greatest of all time.

Moss and Hardy begin by imposing the will of their loud clothing upon each other, with Hardy taking the lead in terms of wrestling with his greatest hits right off the bat with an inverse atomic drop, double leg drop, and basement dropkick before a solid punch to his face slows him down.

Moss tags in but soon falls prey to some double-teaming by Hardy and the incoming McIntyre, with the Scot finishing a sequence with a hard clothesline. Hardy tags in again and Michael Cole praises Jeff’s history of tag team success, with nary a word of his brother of course. 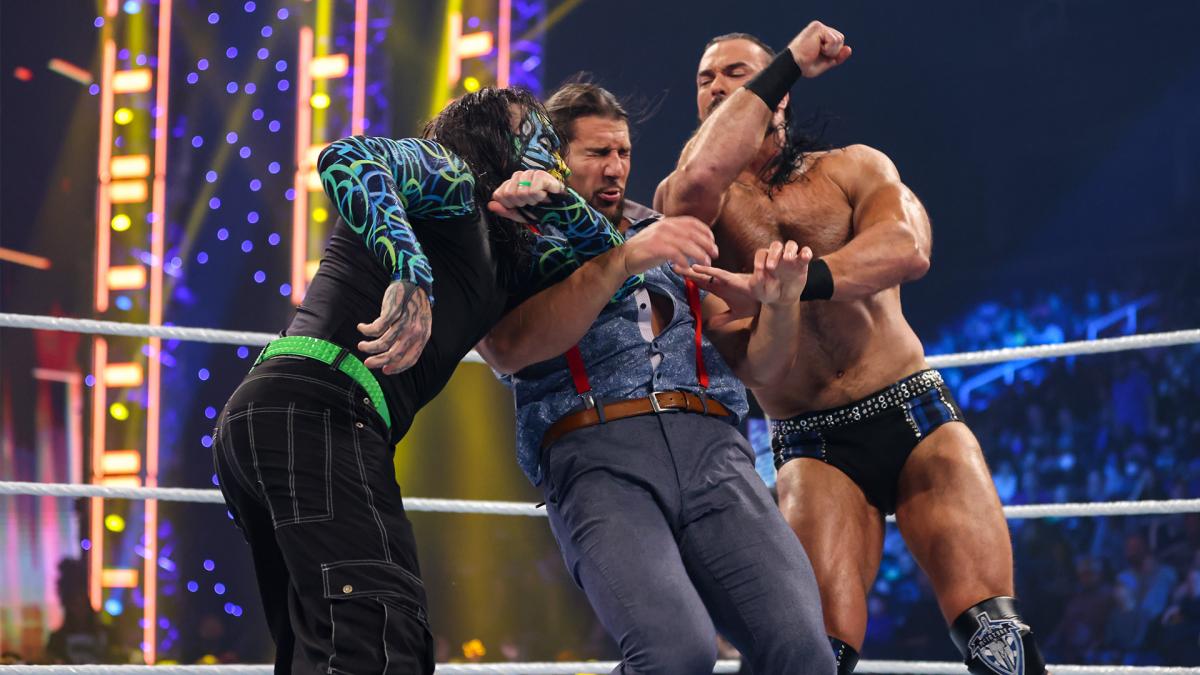 This double-teaming wipes the smile off of Moss’ face. Photo: WWE

Back from commercial, Hardy is not doing well as Moss gets some cheap shots in from the apron while Corbin distracted McIntyre and the ref. A hot tag brings in Drew, though, and he batters and throws Corbin around, adding a couple of neckbreakers that looked like prototype RKOs on both opponents.  Moss distracts McIntyre in mid-Claymore, however, and Corbin lands a Deep Six for a two-count.

Regardless, Moss eats a Claymore moments later before Hardy tags in to deliver a hometown Swanton Bomb for the win.

Backstage, Kayla Braxton is chatting with Aliyah when Heyman strolls up to her and tells her that he’s pushing for her release if she doesn’t get a confirmation or denial from Lesnar as to his status by the end of tonight. Or, Heyman leaves with: is that just a rumour?

Well, this should be pretty one-sided for Cesaro, but we’ll see. It starts that way, as Cesaro uppercuts Holland from pillar to post, but after Sheamus offers a momentary distraction, Holland fights back and connects with a back body drop and short-arm clothesline.
Sheamus is on commentary singing the praises of Holland while he clumsily spins Cesaro into a powerslam, but as Ridge looks out to Sheamus to receive a little praise, Cesaro rolls him up for the quick win.

Backstage again, Adam Pearce and Sonya Deville hear Drew McIntyre’s case to be involved in the Battle Royale. Pearce and Deville respond that they don’t have the list of the competitors yet. It’s not their decision? Just what is the management structure of the WWE?

Garza opens by ripping off his pants and tossing them into Boogs face, following with a dropkick. They head to the floor where they’re standing alongside a table full of leftovers, but nobody goes into the food yet. In the ring, Boogs cradles Angel and spins him around before catching him in a gut-wrench hold and throwing him behind away before doing it again and landing a powerbomb.

As Boogs is looking to close things out, he’s distracted by Carillo standing on another leftovers table playing Rick’s guitar. Nakamura takes out Humberto’s legs and he collapses through the food. In the ring, Garza superkicks Boogs and uses the Wing Clipper to secure the win. 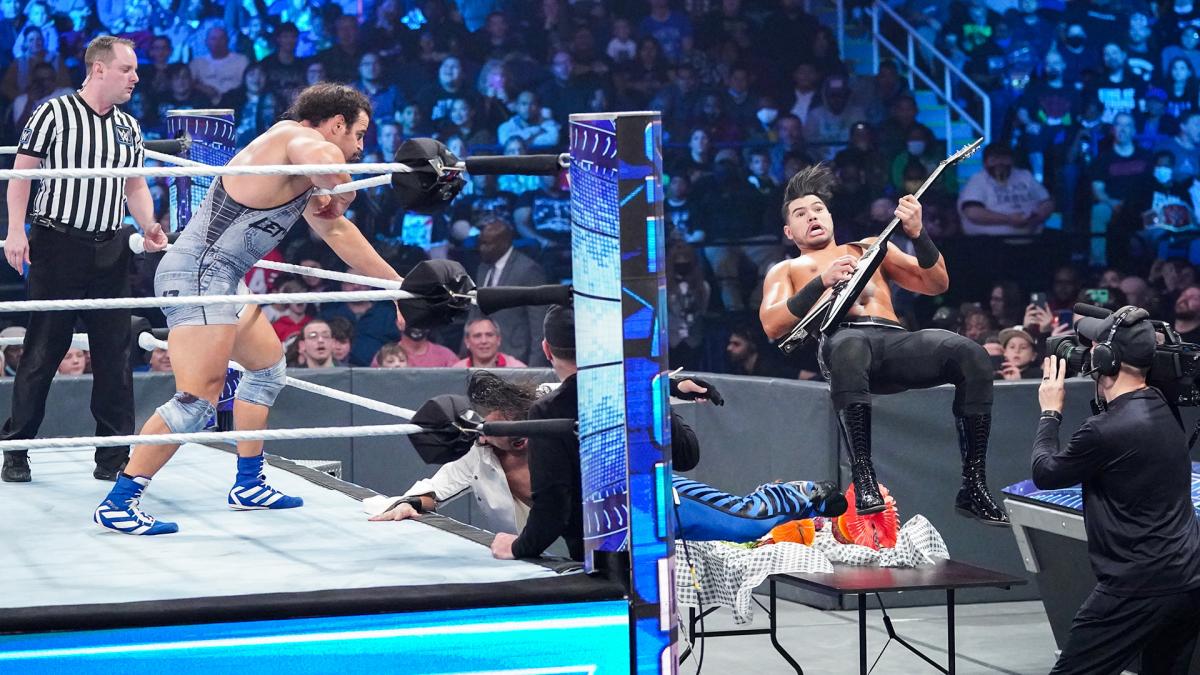 Kayla Braxton catches up with Adam Pearce, who is seeking approval on the list of Battle Royale participants. Wait, I thought he was waiting for the list, not approval of one he made? In any case, Pearce does comment on Lesnar’s situation and says he’d be shocked if the suspension was ended.

In the ring, Cole interviews Charlotte Flair and lets her claim a moral victory against Becky Lynch at Survivor Series, since Lynch cheated in her win. Toni Storm doesn’t take long to show up and remind Flair that they have an upcoming match. Flair tries to sneak attack Storm, but Toni dodges her and sends her to the floor. When Storm chases her, Flair uses some of the leftovers to hit her with a cream pie in the face. Ah yes, the classic Thanksgiving dessert: the nothing-but-whipped cream pie.

In a clip from backstage earlier in the day, Banks is venting about Survivor Series and how the SmackDown women’s team imploded. Deville doesn’t like her tone so she puts her in a tag match.

With Deville on commentary, Baszler loosely applies a very early Kirifuda clutch on Banks, but Sasha backs into her corner to allow Naomi to tag in. Baszler responds with a tag to Natalya who slaps Naomi hard across the face. They fight to the floor where Natalya drops Naomi rear-end first onto the ground. Baszler tags in and applies multiple ankle locks on Naomi, which she keeps fighting out of before finally dropping both opponents with a double-cutter. 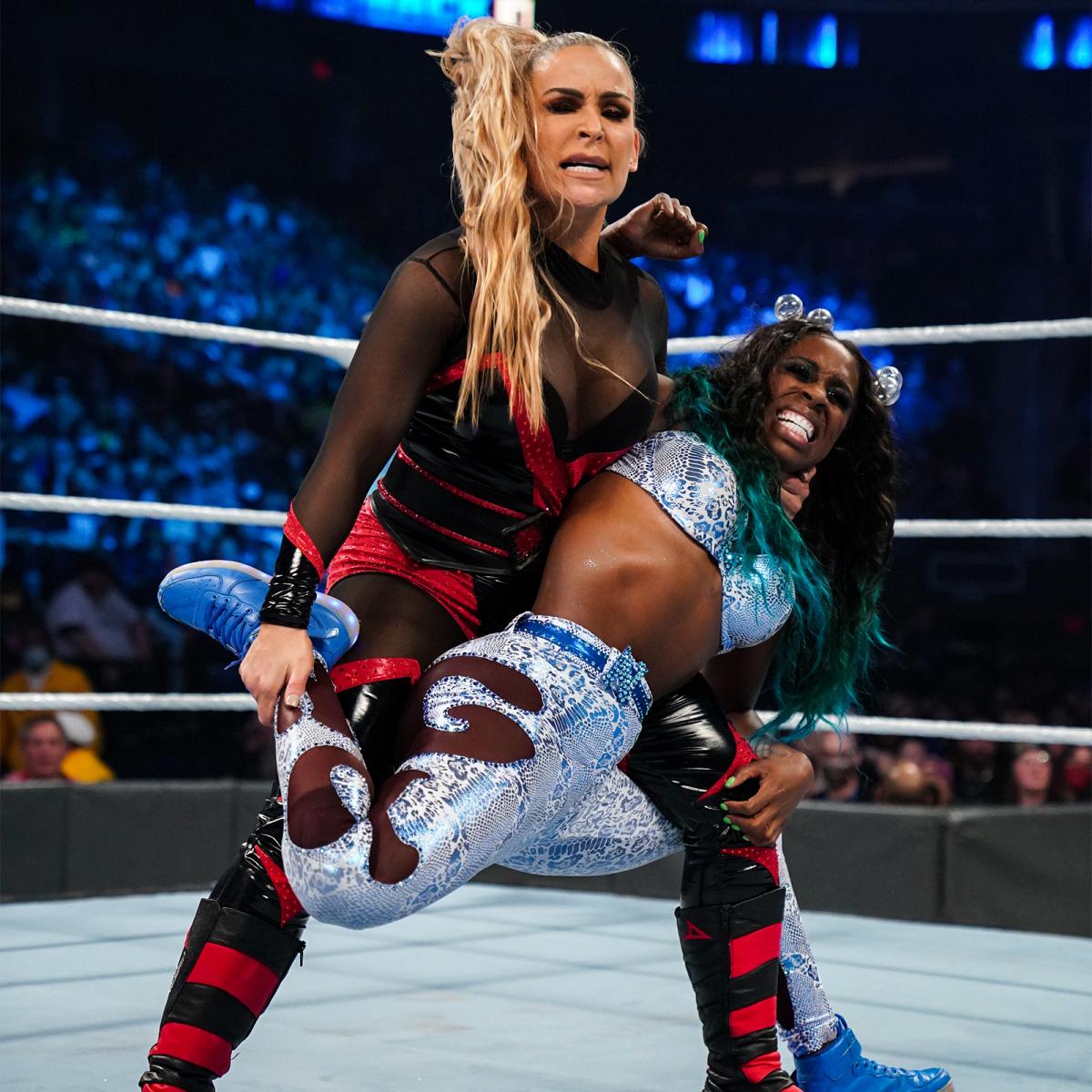 This is just a funny perspective that makes Naomi look pretty small in the arms of Natalya. Photo: WWE

Naomi is inches away from making a tag when Baszler recovers to pull Banks down from the apron, leaving Naomi easy pickings for Natalya to deliver a discus clothesline and Michinoku Driver, but Naomi kicks out of a pin attempt and manages to roll Natalya up for the win.

The list of the Battle Royale participants is posted backstage! Let’s see what master strokes have been made that required such advanced adminstrative deliberations …

The bell rings, but then the announcer explains the match, leaving all the wrestlers in the ring looking unsure of what to do for a few moments. Then Drew McIntyre’s music hits and he charges the ring with his sword, clearing everyone out. Well, almost everyone. Carillo stands in the middle of the ring and McIntyre doesn’t hesitate to swing for his head, forcing Humberto to duck. Garza then gets the same treatment.

Let’s take a moment to unpack that action, shall we? While much intrigue rests on whether Brock Lesnar should be indefinitely suspended for roughing up Adam Pearce, Drew McIntyre was clearly seeking to commit murder.

We’re told that McIntyre left of his own accord during the commercial break, but no mention is made of a suspension. Or arrest.

The Battle Royale starts in earnest with Mahal eliminated quickly, which neither Cole nor Pat McAfee make any mention of. A Helluva Kick elimininates Drew Gulak, and Moss tosses Shanky all by himself, then Cesaro (who had just gotten rid of Holland). Moss and Corbin each have a go at each other, and a laugh about it, before Corbin actually throws Moss to the floor. They still share a laugh about it anyway.

Zayn tries to forge a partnership with Sheamus, but just like at Survivor Series his offer is rebuffed. The Viking Raiders eliminate Los Lotharios, before Sheamus dumps them both. That brings us down to Corbin, Ricochet, Sheamus, and Hardy. A Brogue Kick drops Ricochet, making him easy pickings for a trip over the ropes. Hardy delivers some big moves with a Whisper in the Wind on Sheamus and a Twist of Fate on Corbin, but as they both seek to team up on Hardy he manages to toss them both to win.

Except, Sami Zayn had been hiding somewhere and rushes Hardy from behind to dump him over for the win. 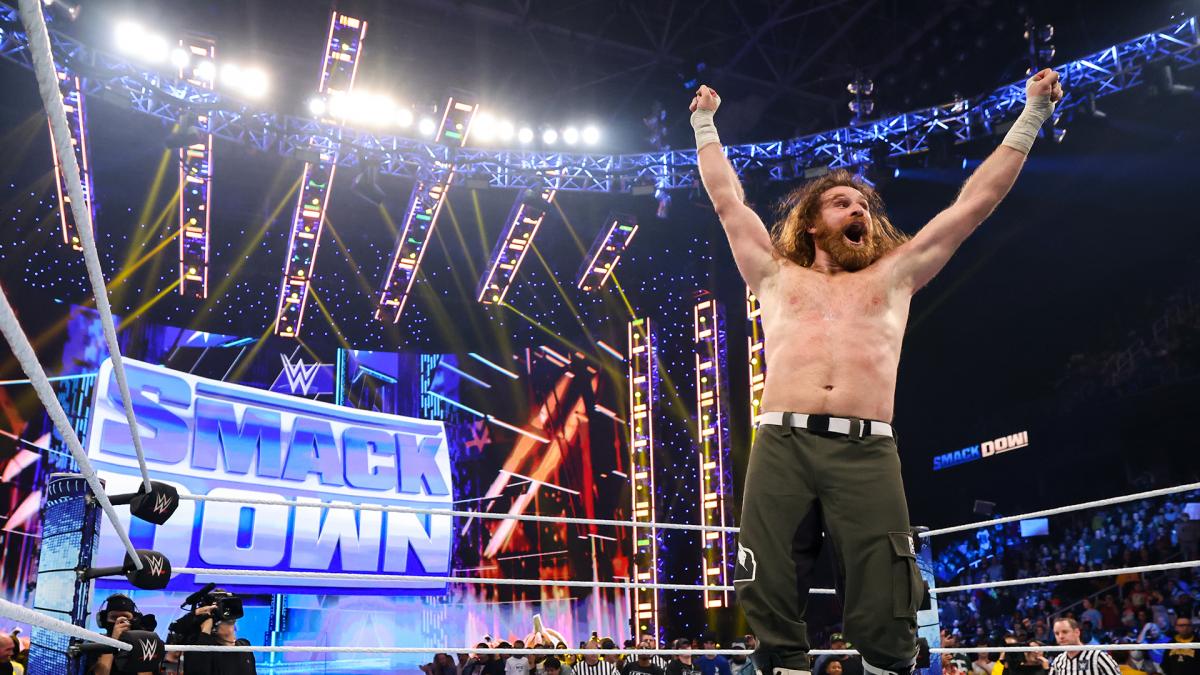 Sami celebrates while The Bloodline, watching from backstage, have a laugh about the outcome. Kayla Braxton enters the ring but, instead of talking to Zyan, she receives breaking news and announces that Brock Lesnar’s suspension has been lifted and he’ll be on SmackDown next week. The mood in Reigns’ office changes, while Zayn is rightfully upset about having his moment in the spotlight stolen from him.

Sami Zayn’s win is a bright spot, just to have some fresh and unpredictable outcomes. Otherwise, it’s another in the line of very okay SmackDown shows, with decent matches and serviceable storytellings. It’s not bad, but I keep wishing it would be great.