Mat Matters: Without Mosca, I’m not writing this Without Angelo Mosca, it’s unlikely that I would be writing this today.

It’s noted in my scrapbook the day that we met, September 20, 1986, at Casey’s restaurant in Waterloo, Ontario, which was just around the corner from the flower shop that my Mom owned, and Mom and I had gone there to eat.

I was a 15-year-old kid, who had been publishing a newsletter, The Wrestling Report (later The Canadian Wrestling Report). I was in awe to see Mosca there with announcer Milt Avruskin, who I knew from International Wrestling broadcasts.

Gathering up my nerves, I went to introduce myself.

Big Ang and Milt couldn’t have been nicer. They told me that they’d been putting together a promotion for southern Ontario called Pro Wrestling Canada — like all promoters, they hyped it to the hilt. Like the great self-promoter that he was, Mosca pulled out a Miller Lite-branded photo on the spot, and signed it to me. 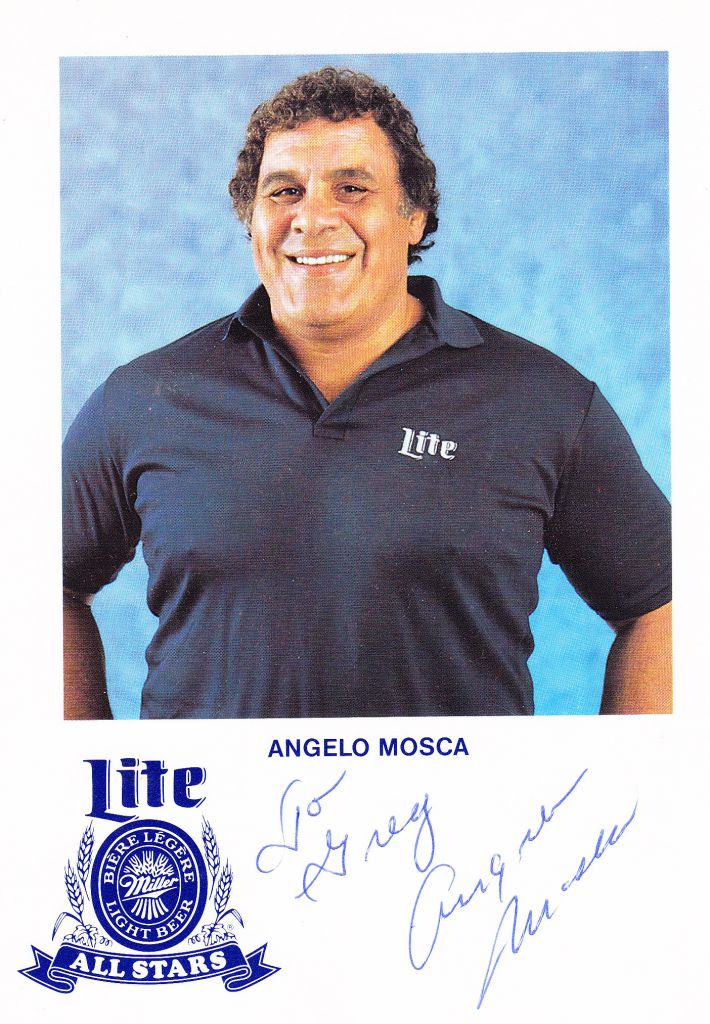 Next thing I knew, Milt and Ang invited me to the studio in Kitchener where they were doing some of the production work, and subsequently to the Pro Wrestling Canada card at the Kitchener Memorial Auditorium, where my buddy, Serge Solski interviewed Road Warrior Animal and Ivan Koloff for the newsletter (I chickened out), and Gino Brito Sr. (which I did do).

So there’s a direct line from that moment in 1986 to today, with 35 years of pro wrestling journalism under my belt, seven pro wrestling books with another on the way, and even a few awards.

There’s another good book connection too.

In March 2003, my first book, The Pro Wrestling Hall of Fame: The Canadians, was coming out, and we had a book launch scheduled for Big Anthony’s in Niagara Falls, Ontario. It was the restaurant owned by Tony Parisi‘s widow, and basically all the oldtimer wrestlers were coming out to the event.

I’d left a couple of messages for Mosca, but had not heard from him, could not confirm to anyone he’d be there. It wasn’t far from where he lived at least.

Another time I called, I got his wife, Helen, on the phone. She simply said, “He’ll be there.” 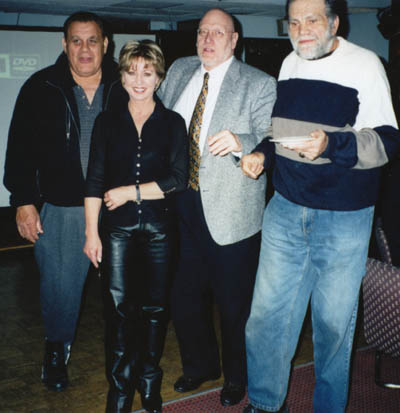 Angelo Mosca, Rachael Dubois, Johnny Powers and “Wolfman” Willie Farkus at the launch of The Pro Wrestling Hall of Fame: The Canadians. Photo by Greg Oliver

When Mosca arrived at Big Anthony’s, he was one of the centers of attention. He still had presence.

My family might not have known the wrestlers, but they knew Mosca. All of Canada did.

It turned out that my wife’s Aunt Izzy knew Ang very well from Hamilton, as one of her pals was Jan Faloney, the widow of the late Tiger-Cats quarterback Bernie Faloney, who had played with Mosca. That was so cool to see.

“King Kong” and I would talk on the phone every now and then, as I tapped his brain for wrestling memories. It should not be underplayed how much he understood the role that journalists played in his career, in his fame. He always made time to talk about his career — direct, brash, foul-mouthed as he was; in short, he was always a great interview.

In 2011, Mosca’s autobiography, Tell Me To My Face, came out, written with Steve Milton. I had talked to Mosca while he was working on the project. “Steve Milton is a slow writer. Jesus Christ, I’ve given him a lot of material,” Mosca cracked. A veteran of the Hamilton Spectator newspaper, Steve had leaned on me and the SlamWrestling.net site a little to make sure the facts were right on the wrestling side of Mosca’s life.

It all came together at the Mosca book launch, where I was able to attend, and thank Helen Mosca in person for the part she played in getting Angie out to my first book launch.

The Still Mosca event in 2015 was a ton of fun, too, and it was great to finally meet a lot of his family. It was proof that he had become an iconic figure.

My final memory of Mosca in person comes from 2014, when we had our sixth Titans in Toronto dinner, in the north end of the city. At the time we were working on the Sweet Daddy Siki documentary for CBC as well, and we wanted Mosca involved — so we got him out to the locale early and interviewed him. (Take a moment and read Caleb Smith’s account of bringing Mosca and Reggie Love to the dinner: A ‘lovely’ trip with ‘Rotten’ Reggie and ‘King Kong’ Mosca.)

At Titans in Toronto, Mosca had his cane, so was often seated in one spot, and it was akin to the Godfather, where everyone came up to pay tribute to him … for good reason.

Mosca was greatness personified, a true larger-than-life personality with massive mitts for hands, a terrifying scowl and a booming laugh.

Thanks for the part you played in my life, Ang.