Avruskin, who was born in Fergus, Ontario, never set out to be involved in the wrestling business, and always said that it was a “total accident” that he got involved in announcing. 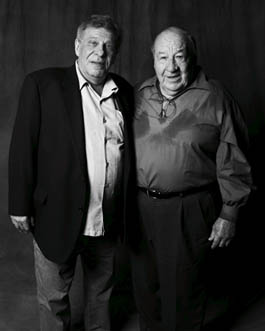 Milt Avruskin and Duncan McTavish at the Titans in Toronto III dinner in September 2008. Photo by Andrea Kellaway, www.andreakellaway.com

Yet, alongside Crybaby George Cannon on Superstars, which got wide reach in Canada through stations such as Global TV, Avruskin was in homes on a weekly basis, describing the action and looking downright small in comparison to the behemoths in the ring. The shows, mostly taped in Windsor, Ontario, and Montreal, Quebec, are still remembered fondly by fans.

When Gino Brito teamed with Andre the Giant and Frank Valois to bring wrestling back to Quebec with International Wrestling, he needed someone that knew the TV business, and that was Avruskin.

After International Wrestling sold out to the expanding WWF, Avruskin saw an opportunity, and worked with Angelo Mosca on Pro Wrestling Canada, a brief attempt to bring the NWA (primarily through the Charlotte-based Jim Crockett Promotions) to southern Ontario.

Apart from the wrestling, Avruskin was an expert in TV distribution, and often spoke with sadness at how foolish promoters like Cannon were to never keep the master tapes of the TV programs.

His Toronto-based company, Rebel Media Ventures, led him to work with some of the top broadcast executives and producers worldwide. But in recent years, he spoke with great joy about being able to bring his son, Aaron, into the business as well.

In the late 1980s, he had a major influence on two teenage wrestling fans from southern Ontario — this writer and Aaron Weiss, who would promote, and later run the Pro Wrestling Superstars: Past, Present and Future pay-per-views.

“Milt Avruskin took a 14-year-old wrestling fan and gave him the chance to co-host and do play by play for the AWA,” recalled Weiss. “He was blunt, kind and very talented. He was my friend and single handily launched my career.”

As for this writer, a chance meeting at a Waterloo restaurant led to the editor of The Canadian Wrestling Report — me — being invited to a Pro Wrestling Canada taping, and then backstage to do interviews at a show at the Kitchener Memorial Auditorium. It marked my graduation from interviewing Ontario indy wrestlers to stars such as Ivan Koloff and Gino Brito Sr.

Avruskin is survived by his son, Aaron, sister and brother-in-law Diane and Alan Minsky, his mother Belle Ginsberg, and nieces and nephews.