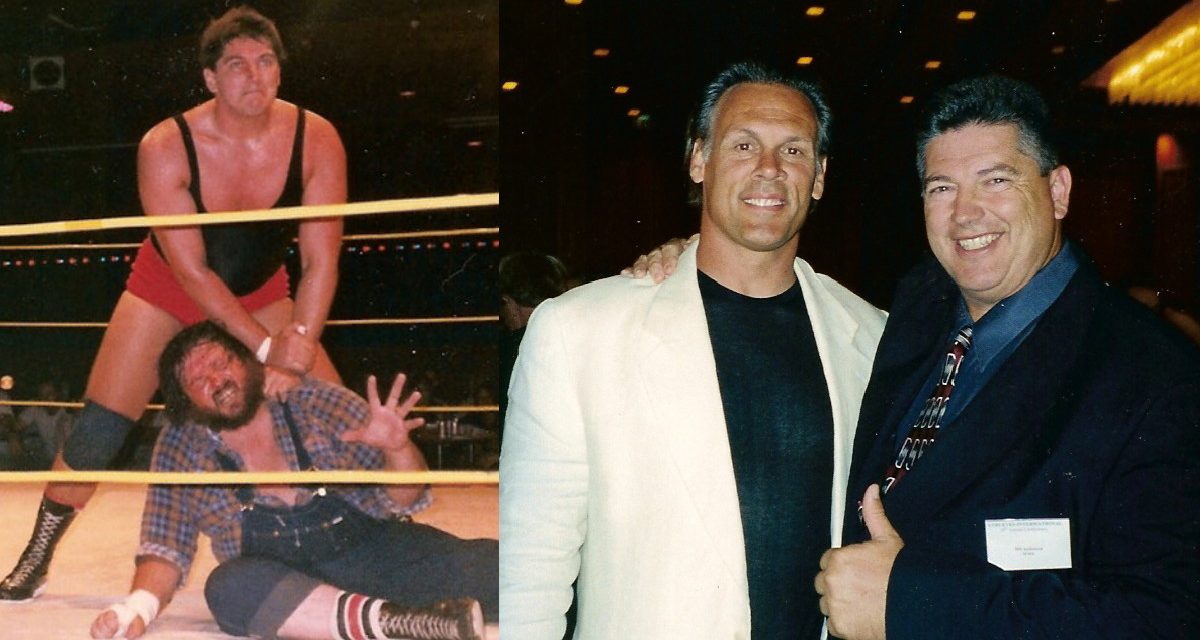 Some wrestlers have a bit of memorabilia and photos from their career, others have next to nothing, with all the moving, divorces and chaos over the years. Then there is Big Bill Anderson.

When he sat down to put together a photo book from his career as a wrestler and trainer, he was able to go through 50 or so photo albums.

“I have so many photo albums at home,” Anderson understated. “It was just nice going through and taking pictures out and using them for the book. Every picture in the book was hand-placed for a reason. I had hands-on with the entire book. It was definitely not some ghost-writing project. I sat with my publisher and placed every photo in where I wanted it, did the captions for every photo as I wanted it. I’m quite proud of the whole experience. It took about two years to get it done, because I was so inexperienced in how to do this.” 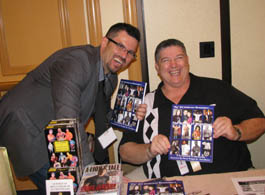 Michelle Starr with his teacher Big Bill Anderson at the Cauliflower Alley Club reunion in April 2011. Photo by Greg Oliver.

Going through “Big” Bill Anderson Remembers… The School of Wrestling!, fans will be taken from Anderson’s early days in the wrestling business, with newspaper clippings and photos, to recent fan fests, and especially the Cauliflower Alley Club reunions, which Anderson tries to attend every year. Page after page, it is remarkable the people that Anderson came in touch with, wrestled, and trained, including the iconic Sting and Ultimate Warrior.

Yet Anderson couldn’t find everything he wanted. “I was kind of amazed I couldn’t find a few, but looking through 50 photo albums that were three inches thick, I was pretty amazed at just how many I did find.”

He’s been working off and on his autobiography — titled I Carry the Scars — detailing his start in wrestling in 1974 to the present.

But the photo book, done via print-on-demand was the first priority.

“I wanted to get this first one done because I felt in my heart that I needed to pay tribute to my students, the many men and women that came through my school over the years, that I traveled on the road with, to Mexico, to Japan, Canada, all over the United States,” he said. “These young men and women basically made me a living for many years, and I helped book them in WWF, AWA, WCW, Mexico, Japan, that sort of thing. So I wanted to pay tribute back to my friends.”

One of those students was Loren Miyake, who wrestled as Riki Ataki.

“What stands out about the book is not what changed during the decades of his career as a wrestler and trainer but what does not change: Bill’s unswerving belief in and dedication to his students, his friends and the wrestling trade. In this book, obscure local talent shares the page with international superstars, and the common bond is Bill Anderson, who exhibits the same exuberance for each,” said Miyake. “I owe so much of my own wrestling career and so many of the wrestling friendships I forged to Bill that his book feels like my own book, not only for those few years that I wrestled but also for the many more for which I have called Bill Anderson my friend. So, yes, it certainly did bring back some memories.”

For a big part of his career, Anderson partnered with Doug Anderson, who he trained in late 1984. The Andersons were not actually related, but he’s Uncle Billy to Cheerleader Melissa Anderson, who has achieved fame in TNA as Raesha Saeid and Alissa Flash.

Uncle Billy bowled over Melissa when she got a copy at the Cauliflower Alley Club reunion in April 2011 in Las Vegas at the Gold Coast Hotel & Casino.

“Shockingly, so many of the pictures people had never seen before,” said Bill Anderson. “She was absolutely amazed that I had pictures of her when she was four years old at Disneyland, with her dad.”

Melissa Anderson was excited to flip through it.

“I’m going through it, and going, ‘Oh, there’s me at five. I’ve never seen this picture before.’ I’m just shocked at how many childhood photos that are in there that I didn’t know existed,” she said. “I was like, ‘Wow, I wasn’t sure I was ready to share this part of my life.’ Thanks Billy, thanks for asking.”

The book was a labour of love for Bill Anderson, and he was rewarded with a great reaction to it when he unveiled it at WrestleReunion 4 in Los Angeles in January. The hundreds of hours putting it together had paid off.

“I am very humbled by the fact that I even have a book. I’m just honored that people buy it. I’ve sold about a thousand of them so far,” he said. “It’s more than I ever dreamed that I would accomplish 35 years ago. It’s a real blessing to me to have this.”