TNA hopes to make an Impact with name change

The re-branding of TNA into Impact Wrestling has taken place both on-screen and behind the scenes, and the “Wrestling Matters” slogan has been wielded like a weapon against the monolithic WWE. According to those in the know, the name change was a long-time coming.

“There have been focus groups that have literally gone on ever since our relationship with Spike began,” TNA founder Jeff Jarrett told SLAM! Wrestling.

Total Nonstop Action Wrestling began in June 2002, in Nashville, and was soon known as TNA. The company, now owned primarily by Panda Energy International, saw a jolt to its ranks when Hulk Hogan and Eric Bischoff came on board in early 2010.

Hogan recently told SLAM! Wrestling that the name change is one of the things that he felt needed to be done.

“It’s a real slow process, but one of the big changes that a lot of people do agree with, and a lot of people don’t agree with, is changing the name. I’ve had several business meetings where I walk in and say, ‘Hey, I’m with TNA Wrestling.’ And if I don’t say it’s Total Nonstop Action, it takes me 10 minutes out of a business meeting to explain what TNA means — and that it’s not a strip club,” Hogan explained. “So if you have to explain the first 10 minutes to a huge corporation like Chevrolet or McDonald’s, you’ve already lost the deal if you have to do that. Just changing the name gives us a breath of fresh air.”

The sexual innuendo of the TNA name was obvious, wrote columnist Mark Madden on Wrestlezone.com. “The re-branding of TNA as IMPACT is smart. TNA was a [Vince] Russo/Terry Taylor-type pun that BACKFIRED. Advertisers thought TNA meant T n’ A, breasts and posterior. TNA actually picked a company name that was counterproductive.”

Out with the old and in with the new…

The name of the program was an issue from the beginning, said Jarrett. “When Impact came on, there wasn’t wrestling attached to it. So in the shortest sense in the form of everything is, it is Impact Wrestling, to get the people to focus on, it is a professional wrestling show, we embrace professional wrestling, and not just the in-ring action.”

It’s also tough to compete against the WWE brand, and its shows which have been on the air for such a long time, he said. “We’ve been on network TV a relatively short amount of time, comparatively speaking to the other guys. The name of the show, Impact, we don’t have a 40-plus year history built-in audience, like WWE does. They went from WWWF to WWF, when it was World Wrestling Federation, but always had that built-in audience,” Double J said.

“While the name change is subtle, it is also very powerful. TNA is proud to be in the wrestling business, and not afraid to say it. And, to emphasize our commitment we have added the word ‘wrestling’ to our already well-known ‘iMPACT!‘ brand,” said TNA chief marketing officer Al Ovadia in a press release.

In the same release, Brian J. Diamond, senior vice president, sports and specials, Spike TV, notes that TNA is a proven ratings winner on Thursday nights. “We feel the new IMPACT WRESTLING branding message will resonate with our audience who crave the action-packed wrestling that only TNA can provide.”

“For our company, wrestling does matter, because there’s the good ol’ days of Hulk Hogan, Ted DiBiase, and Brutus Beefcake, and we don’t want to go there,” said Hogan. “We want to go where wrestling should be right now. I think the other company, Vince McMahon, kind of like is doing the same thing, but his vision is a little different. They’re a global entertainment company, they’ve got a huge company called the WWE, which focuses mainly on wrestling. He’s got one billion-dollar company. He’s an entrepreneur, he wants 10 or 20 billion-dollar companies.”The slogan “Wrestling Matters” means different things to different people.

Hogan doesn’t agree with McMahon’s edict to play down the word wrestling in relation to his company. “I think even though they’re hiding behind the banner of superstars and divas, they’re in a ring, a four-sided ring,” said Hogan. “For us, at TNA Impact Wrestling, we are really focused on the wrestling.”

For Knockouts champion Mickie James, the slogan is a motivating factor.

“It matters to everybody on different levels, whether it’s the story, the athleticism or whatever your thing is that has made you fall in love with wrestling, that’s why it matters to you,” she said. “It’s a huge opportunity for us, as well. It’s something different, it’s exciting and it kind of puts the driving force behind Impact Wrestling and why we’re going this route.” 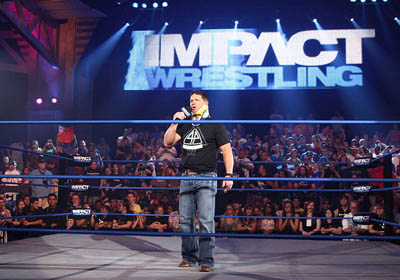 Long one of the flagship stars of TNA, A.J. Styles hopes that the company can capitalize on the name change.

“If that’s what people want to see, we need to make sure that’s what we do. If they want the entertainment, we’ve got to be prepared to give that to them, as well,” said Styles.

“I think there’s a little bit of a disconnect going on,” started Jarrett, pleading for time to make Impact Wrestling’s plan known. “Any promotional campaign doesn’t resonate immediately with 100% of your audience. And Wrestling Matters, whether it be Knockouts wrestling or tag team wrestling or heavyweight wrestling, the essence of professional wrestling is storylines and the feuds that are built, and culminated with a wrestling match in the ring. All the elements that go into professional wrestling, not just the mechanics or inside the squared circle.” 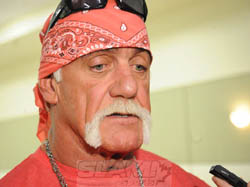 Hulk Hogan talks to the media in Brantford earlier this month. Photo by Mike Mastrandrea.

Hogan also stressed that what the fans see on TV is the result of a lot of analysis and discussion.

“You have to watch not only the quarter hours, not only do we watch the minutes, but if me and you and her are in a one-minute segment, I can break it down to every 20 seconds, and tell you how my numbers were compared to hers and hers,” Hogan explained. “So we are saying that wrestling matters, but we also have to appease the network, that’s our support system, and make sure we have the proper numbers. So if you see a show with five matches that are three or four minutes, we’re not doing that because we don’t want to say wrestling matters and have short matches; we’re doing that because we want to let you know that wrestling matters, but we’re also trying to keep things alive and survive, and keep going, and make everybody happy. It’s not just the wrestling fans that read the dirtsheets; ‘Oh, Hogan says that wrestling matters, but there’s only 18 minutes in an hour show.’ There’s a reason that happens, and a lot of people that think they’re smart to the business don’t understand the big picture. So it does matter, brother. The stronger we get, the more people watch us, the better the ratings get, the more wrestling we get to put on there.”

— with files from Matt Bishop