Avruskin remembered as a much more than an announcer

Days after his surprise passing from an aortic aneurysm, a better picture of the man, Milt Avruskin, is forming. He was much more than the announcer bringing the action into our homes; he was also a father, a coach, and a mover and a shaker in the television industry.

“He dabbled in a lot of different things. The one constant was that he was always respected,” said his son, Aaron Avruskin.

His friends, colleagues and family were only too happy to share their memories of Milt, a man who told it like it was. 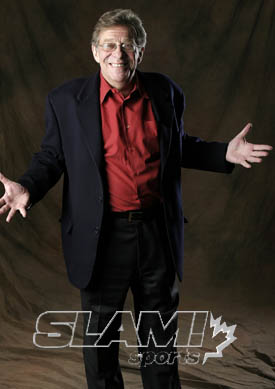 Milt Avruskin strikes a pose at the Titans in Toronto event in 2006. Photo by Andrea Kellaway, www.andreakellaway.com

Those same people turned out in droves for the funeral on May 30, with perhaps 500 people packing the place. At the ceremony, Aaron said of his father: “My father had very few acquaintances, because he made friends so quickly.”

Born July 1, 1946 in Salem, Ontario, and raised in nearby Fergus, Avruskin was into sports as a youngster, a passion that would remain with him the rest of his days. He also loved summer camp. The family moved to Toronto when Milt was 18; his father died, and there was family in Toronto. He studied at the University of Toronto for a time, but didn’t graduate; an accounting course was next, but again, it didn’t take.

But then the wrestling business happened — by accident. 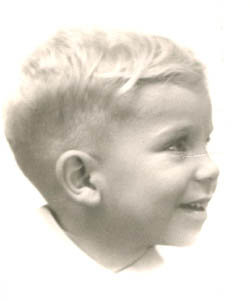 In the mid-1970s, he began working for Universal Wrestling, an independent promotion that ran in competition to The Sheik’s Detroit promotion, first as a ring announcer, then on commentary. Though the promotion didn’t last, his friendship with “Crybaby” George Cannon did. Avruskin and Cannon hatched the Superstars of Wrestling promotion, and Global TV bought into it. The duo would be the announcing team, Cannon in his ill-fitting suits and Avruskin with a nice suit jacket, but jeans underneath. Once the project was sold, Avruskin did what he did best — peddle it to other stations across the country.

Bruce Raymond met Avruskin around this time, as he ran a film studio on Toronto’s lakeshore. He hired Avruskin. “I felt I needed help on the syndication side of our distribution business, which in those days was very strong,” said Raymond, who still runs Raymond International. “He joined me. We formed separate companies for him to run. He did the syndication part of Raymond International’s distribution for a few years. Eventually we just parted ways. There was no problem in either direction.”

Raymond said that Avruskin brought energy to the table. “I felt that he had an additional layer of drive that I didn’t have,” he said.

Avruskin’s time at Raymond International would be just one stop on a myriad of TV companies over the years.

He spent a number of years at Norstar Filmed Entertainment. After that, he was a vice president for distribution at Deer Park Communications, which was renamed Red Apple, for a decade.

While working with Alliance Atlantis, Avruskin arranged a special perk for his son and his friends — two weeks before the first Teenage Mutant Ninja Turtles movie came out, he rented out the whole theatre so Aaron and his friends could watch it early. “It was the coolest thing going to watch that movie before it had even come out,” recalled Beny Matrundola, one of those kids.

Jay Switzer was a buyer at CITY-TV in Toronto, before he rose to become president and chief executive officer of CHUM Limited, and knew Avruskin as a pitchman. 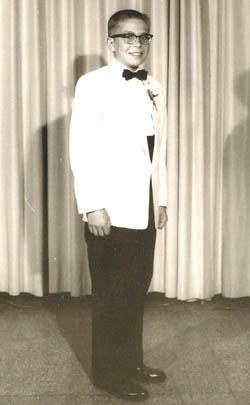 “When I started in the business in the early ’80s, he was already a fixture, a big part of it. He grew to be a real friend over the decade. In fact, he was around long enough to have worked with the previous generation, including my mother, who passed away in the ’80s,” said Switzer. “I knew him as a client. I was a young program manager at CITY-TV in the early ’80s, and he was a distributor of television programs. He was a small distributor and we were a small broadcaster, so we kind of hit it off.”

Besides the Canadian movies that Avruskin was always promoting, Switzer bought the International Wrestling program that Gino Brito Sr. worked on with Avruskin out of Montreal.

Switzer’s friendship continued with Avruskin long after CITY-TV didn’t have room for the shows he was selling. Describing Avruskin as “a passionate content person who cared greatly about the business,” Switzer also made note of how well known Milt was internationally.

“A gentleman, and a fixture at all of the international markets,” said Switzer, referring specifically to an annual industry event in southern France. “You could always find him having a coffee on this one terrace and you could get caught up on business with him.”

David Brady was one of those who hit the road with Avruskin to France.

“He and I traveled, and we were like Frick and Frack. We were really funny, because here’s a guy, he almost bordered on a conservative Jew — and I say that to you only because I’m Irish-Catholic. But he was so not like me. I pray every day, and Milt would laugh at me. We were like the oddest couple,” Brady laughed. “And he was a slob, and I am a complete neat freak. We’d go into the meetings, and it just was a great friendship and a great working relationship for a lot of years. I loved the guy. He was the most honest human being I’ve ever dealt with in my life. The thing about Milt, if somebody ever asked me the single greatest quality he had — apart from being the best friend you could ever have — he was the most honest human being ever. I told his mother this at the shiva — I said, ‘You know, your son was just the most remarkable person of integrity.'”

With Brady, Avruskin co-produced documentaries for CBC, such as The Pagan Christ and The Gangster Next Door, and brought the award-winning children’s show Around The World With Tippi to Brady through his connections in France.

“Milt knew everybody, he just knew everybody. So Milt brought in projects,” said Brady. After the film was made, Avruskin would fulfill his next role as the distributor. “He would be the guy going out and beating the bushes, and selling the shows around the world — recently with his son, Aaron.”

Just a few days after burying his father, Aaron reflected on what people will remember.

“Besides the wrestling, besides the entertainment industry, my dad’s legacy was being a loving father, not just to myself, but to my many, many friends who really looked at him as a mentor and a father figure,” said Aaron Avruskin, who was raised by his father since he was seven years old, his mother unable to participate.

Avruskin’s sister, Diane Minsky, praised her brother’s role in raising Aaron, from his second marriage. “I remember him firstly as a wonderful father and best friend to his son, a truly devoted son to our Mother and a big brother on whom I could depend,” she said.

“Not everyone has as good a dad as I did. My friends were always keen to seek out his advice and counsel,” continued Aaron Avruskin. “He was the coach of my hockey team for about seven years, and heavily involved in my baseball as a youth. More so than the wrestling and the entertainment industry, he was a staple of the community, and he was the type of man that communities are built upon.”

Matrundola was one of those kids who Avruskin coached on the Thornhill Rebels — the team that showed up in uniform at the funeral and placed a signed jersey on the coffin.

“I guess he wasn’t really the most athletic guy at that age, as I know he was when he was younger, but definitely when it came to talking to people and inspiring them, and getting us all to come together, he was the glue to friendships that are still connected to this day. I definitely feel like I owe that guy a lot,” said Matrundola. “Especially those days, him coaching the Thornhill Rebels was very special to a lot of people. He really put his heart and soul into that.”

Brady said that Avruskin loved to talk about the exploits of his son and the sports teams, yet wasn’t a braggart about his own accomplishments.

“When he got inducted into the [Canadian] wrestling hall of fame [here at SLAM! Wrestling], he called me, and he said, ‘I’m getting inducted.’ I said, ‘What? For what?’ I didn’t know he was an announcer. He never told me that part of it,” said Brady, recalling that his friend would talk about the wrestling days on occasion.

“He used to tell me stories. It was the only time I questioned his authenticity. They were so out there I didn’t believe it,” admitted Brady. “It took me a long time to actually believe that he did this. He was actually in a weird way a very humble guy. He never bragged about it at all.”

Angelo Mosca, who partnered with Avruskin on Pro Wrestling Canada in the late ’80s, admitted that Milt was a “key part” because “he was good for the TV side.” 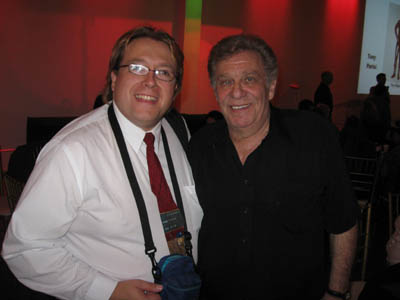 Montreal promoter/historian Bertrand Hébert and Milt Avruskin at the 2010 Titans in Toronto dinner.

His son noted that Milt must have stood out in the wrestling dressing rooms.

“He was a very well-read and a very intelligent man. I think that’s why he was so respected in the wrestling business,” said Aaron Avruskin, who used to go backstage at Maple Leaf Gardens with his dad. “It’s not maybe the most intelligent, book-smart group. But my father was able to relate his knowledge in a way without coming across as better than these guys. I think they respected him for that, and I’m sure they knew that he was an intelligent guy, and I’m sure they respected him for that. As people have said, he could drink with a drunkard and dine with a king. And he wouldn’t be out of place in either setting.”

Minsky said that her brother’s personality was larger than life.

“He always had a story. He knew so much, really, he knew so much about so many different topics. You name a topic and he could join into any conversation that was going on in a room — and talk intelligently about whatever it was. He was a very clever man,” she said. “You knew if he was in a room, his personality, his voice. But really, his intelligence, because he really could talk about any topic. He knew something about everything. And he didn’t talk in a stupid fashion.”

Avruskin knew people, said Brady. “The man was a brilliant dealmaker and negotiator. That part of him I’m really going to miss, apart from his twisted sense of humour.”

Liza Vespi worked on transcripts for Avruskin through her company, and even went to see the 2008 movie, The Wrestler, with him. “I loved his racy sense of humour, caustic tongue and loyalty to his friends and loved ones,” she said.

The wrestling business was a lot of fun for his dad, said Aaron.

“He was good at what he did. He was a good speaker. He was an articulate man. He did really take pride in putting the guys over. He got a kick out of it,” he said, adding that the kayfabe era, with its need to keep the “secrets” of wrestling hidden away, was ideal for Milt. “My dad liked to joke around. He liked being in on the gag.”

Greg Oliver can honestly say that meeting Milt Avruskin and Angelo Mosca at the Waterloo Casey’s restaurant, next to Mom’s Petals & Pots flower shop, was a turning point that led to, well, this. All these books, stories at SLAM! Wrestling, and more. Thanks, Milt. Rest in peace.