In showbiz, there are stars and there are bit players.

While the stars command the spotlight and bask in the adulation of fans, the bit players toil in the wings, dutifully following directions and wondering if the next gig will be their breakout role.

It’s no different in pro wrestling, where the bit players are the proverbial “ladder” up which the stars (pardon me, “superstars,” in WWE parlance) must climb.

Take Mark Jindrak, for instance. He has wrestled the major promotions in the United States, Japan and Mexico, and competed against some of the top names in the world, but can you remember exactly what he looks like?

To many fans, Jindrak is likely remembered as a muscular, tanned, somewhat-tattooed and otherwise unremarkable wrestler who was once in a tag team with Luther Reigns… or was it Garrison Cade? (Answer: both).

In 2005, when WWE wished Jindrak “the best on his future endeavors,” the wrestling world responded with a collective lack of shock. 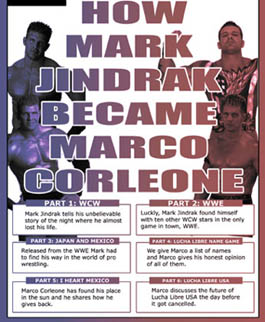 But Jindrak, it turned out, wasn’t to be deterred so easily, and for the past six years has been toiling on the international circuit to make a name for himself. Interestingly, that name is not Mark Jinkdrak, but instead Marco Corleone — his nom de plume in Mexico, where he has become an unlikely star.

Jindrak’s journey from relative obscurity in America to a kind of folk-hero fame in Mexico is a tale of patience and stubborn determination — and it makes for a surprisingly engaging shoot interview.

How Mark Jindrak Became Marco Corleone, a four-DVD set recently released by Highspots.com, is a candid look at the wrestling business from someone whose career always seemed on the periphery of stardom.

“I was a man without a gimmick,” Jindrak says of his four-year stint in WWE, during which he was best known for partnering in a team with Garrison (Lance) Cade.

In the interview, Jindrak speaks highly of the late Cade, as well as regular opponents such as the Dudley Boyz and La Resistance.

“We were reliable,” he says of his work with Cade, “but we didn’t put asses in the seats.”

By that point, Jindrak had grown accustomed to the hierarchy of stardom in professional wrestling, since he had previously failed to climb it in World Championship Wrestling.

His WCW tenure started with a chance encounter at an Orlando Denny’s, where Jindrak was working as a waiter on the graveyard shift. Very late one night, WCW wrestlers Alex Wright and Barry Houston wandered into the restaurant, got chatting with the six-foot-six waiter, and suggested he try out at WCW’s training facility, The Power Plant.

When the Denny’s was held up at gunpoint later that night, Jindrak decided a career change might indeed be a good idea.

The Power Plant was notorious for its grueling tryouts, with hundreds of squats and pushups followed by miles of jogging, but the athletic Jindrak passed with flying colours. Learning to actually wrestle, on the other hand, took more work.

Gradually he learned his craft, tagging with partners like Sean O’Haire and Shawn Stasiak, and remained a reliable worker on the WCW roster until the company was bought by WWE.

Jindrak was in the first iteration of The Alliance — the faction of WCW heels “invading” WWE — but was still “super green” and was demoted to the Heartland Wrestling Association for more training.

He speaks without self-pity or resentment about his inability to gain a foothold at the top of the WWE roster. He understands how the business works, and says he used every step of his career as a learning experience.

The shoot interview carries on in chronological order, delving into his 2006 tour for New Japan Pro Wrestling and HUSTLE, where he teamed with Matt Morgan.

The last half of the interview focuses on Mexico, where Jindrak reinvented himself in Consejo Mundial de Lucha Libre (CMLL) as the brash Italian Marco Corleone. The three DVDs accompanying the interview disc showcase Jindrak’s international wrestling career, focusing largely on his work in Mexico (enjoyment of these matches will depend on your tolerance for Spanish commentary, outlandish spots and a near-constant blaring of air horns).

Though initially a heel, Corleone has earned the adoration of the Mexican fans in a way non-Mexican wrestlers seldom do (Jindrak says Vampiro is the only other North American wrestler to achieve such fame south of the border).

Jindrak has devoted himself to Mexico, learning to speak Spanish and even penning a popular children’s book, Marco Corleone: Las Primera Luchas de Mi Vida (Marco Corleone: The First Fights of My Life), aimed at helping kids cope with bullying.

Whereas many shoot interviews devolve into the tell-all gossiping of bitter has-beens, Jindrak’s is a refreshingly humble, honest assessment of a career that took a unique path to success. You won’t hear any sordid tales of drugs and debauchery, but you might find yourself with a different outlook on wrestling’s struggling stars-in-waiting.

Colin Hunter has a very low tolerance for the ever-blaring air horns at Mexican wrestling events.