Mickie James has been in TNA nearly eight months now and has had her fair share of memorable moments. She’s the reigning Knockouts champion after beating Madison Rayne for the belt last month and has been a key cog in the company’s women’s division since her debut.

James could be in TNA for 100 years and might not be able to top what she did on the December 9th edition of Impact when she met long-time rival Tara in a steel cage match.

Late in the match, James climbed the cage and looked primed to escape and win the match. Instead, she got the top, looked down at her rising opponent and delivered one of her signature moves, the Thesz Press, from the top of the cage onto Tara below. 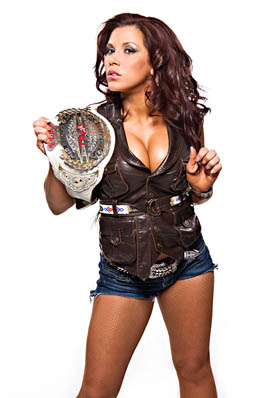 “Come on! You gotta be kidding me,” TNA play-by-play announcer Mike Tenay said as it became clear what her intentions were.

“Myyyyy Goddddddddd!” Tenay exclaimed as James went soaring through the air, hitting the move and winning the match.

“That was awesome! I’ve got friggin’ goosebumps, man! I ain’t never seen a female wrestler do something like that,” Taz concluded.

James told SLAM! Wrestling last week that she was “freaking out” when she got to the top of the cage.

“It seemed better on paper,” she said, laughing. “I wasn’t that nervous until I actually got up there. I’m looking at outside and thinking it was really far down. Then I looked into the ring and it was still really far down. Once you’re up there, there’s only one way to go. It was actually very thrilling diving through the air, though. Very thrilling.”

James, who comes to Canada when TNA visits London’s John Labatt Centre on June 16 and Toronto’s Ricoh Coliseum on June 17, has mainly been feuding against Tara and Madison Rayne since her arrival in TNA on the Oct. 7 edition of Impact.

She gives Tara (Lisa Marie Varon), her long-time rival, high praise — especially for working through a bad elbow injury that occurred during that match.

“Tara is amazing,” James said. “She’s one of the best and I think she’ll go down in history as one of the best female wrestlers of all time. She’s amazing at what she does and she’s one of the toughest opponents I’ve ever had. She’s constantly bringing it. She brings 100 percent every time she goes out there. There’s nobody I’d rather do something like that with than her. I know and trust in her. Even though I knew she was hurt, I knew we could still do it and she knew we could.”

James also heaped praise on Rayne, her biggest rival since arriving in TNA. The two have had many battles for the Knockouts championship, but it looks like it’s James who has gotten the best of the feud between the two, winning the title in a quick match at Lockdown and retaining it at Sacrifice.

“It’s been fun,” James said. “With any person you get a chance to work with, everybody has their own spice and their own character, especially if they’re so into the character and you don’t have to depend on one person to carry anything. Madison is so deeply involved in her character. She knows exactly what her character’s going to do at any given moment and only she can do it. It’s just professionalism and know who you are out there and capture it and embrace it.”

A five-time WWE Women’s Champion, one-time WWE Divas Champion and current TNA Knockouts Champion, James is one of the most accomplished and popular female wrestlers in the game today. 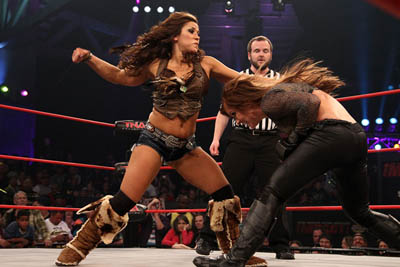 Mickie James takes it to Madison Rayne at Genesis.

Having been in the business for more than 10 years, James has seen a transformation in the role of women’s wrestling. On Impact, the women’s segments often are the highest rated and there’s multiple feuds going on at once. It’s safe to say the profile of women’s wrestling in America has risen significantly since James started. Now she says the women are put under the same microscope as the men — and that’s exciting for her.

“I think the women have raised the bar for ourselves to go out there and be looked at as just as tough and just as respected as any guy in the ring, which is something from 10 years, it wouldn’t have been that way,” James said. “The women were more of just a novelty match. It’s one of those things that have gone on a roller coaster over the last 20-30 years where women’s wrestling was heavy, then it wasn’t around at all, and now it’s back and it’s strong and it’s one of the highest rated segments on the show and people really get into it.”

James, who currently is working on song selection and getting ready to head back into the studio for her second country music album, said she was on the fence at first about returning to TNA, where she was in 2003, after being released by WWE in April 2010, but was looking for new and exciting opportunities.

“Once I made the commitment and made the decision that this was something I really wanted to pour my heart into, I came in and I feel like I’ve really tried to do that as much as possible,” James said. “I feel like that’s shone through, or I hope it has, anyway. I was excited. It’s definitely been a new journey for me, a new chapter in my life and in my career. It’s been exciting.”

Whether it’s as a musician or as one of the top female wrestlers in the country, all James wants to do is continue to learn — and as one of the featured players each week on Spike TV’s Impact Wrestling, she has that opportunity.

“I’m still learning everyday,” she said. “I love what I do and I’ll keep doing it as long as I can because of that reason. If I can keep building my legacy and building my name and building my career and adding to who I am, I think it’s wonderful.”