When Kevin Nash returned to WWE, it was on one of the company’s biggest shows, the Royal Rumble pay-per-view. Since then, the former champion hasn’t had a televised match, leading many fans to speculate that he is no longer with the company. In actuality, though, Nash has a much simpler explanation: “That’s not what I signed to do.”

Instead, Nash is playing a more behind-the-scenes role in the developmental area. It’s an opportunity that he thinks is a good fit for him, as he told SLAM! Wrestling during an appearance at the recent CWI show in Brantford, Ontario. 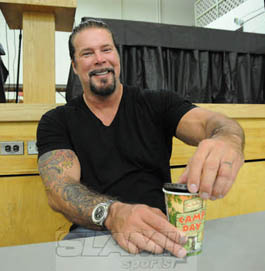 Kevin Nash smiles, anticipating his yummy coffee, at the CWI show in Brantford, Ontario, on May 14, 2011. Photo by Mike Mastrandrea

Never known for his technical prowess, it may seem counter-intuitive for Nash to be training younger athletes who can undoubtedly perform moves that he has never even attempted. Nash is quick to point out, however, that there is a lot more to the sport than only doing moves. And it is precisely those other aspects that are in the most need of teaching.

“It’s true that (the older generation) can’t give them that much in terms of showing them (moves), but we can give them psychology — how to put a match together, how to tell a story. One of the biggest problems this business has had, is that the people who have taught wrestling have always been ‘mechanics’, but they’ve never been the guys who’ve drawn money. You need guys that have drawn money to teach guys how to draw money.”

“There’s a different process to be an opening card guy to being a main event guy,” he elaborated. “There’s a specific way a main event guy works. Those are the things that I think I can bring to the new generation of guys.”

In terms of main-eventing, Nash certainly has the pedigree, having done exactly that during his initial WWE run and during WCW’s heyday in the mid-to-late ’90s. He believes a lot of factors contributed to his success. 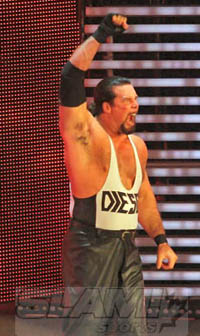 Kevin Nash at the 2011 Royal Rumble in Boston. Photo by Bruno Silveira, www.topropephotography.net

“I don’t think there’s a lot of people on the planet that have my size, my build, my face. Most giants aren’t exactly handsome and can call themselves ‘Big Sexy’. I’ve been blessed with a different package than most big guys. I was more mobile than most — even when I was beat up and torn up. And I had a good sense of humour. And, like anything else, the stars have to kind of line up. I was blessed that things worked out for me.”

He’s also fortunate, he says, that he now has the time to enjoy his life outside of the ring. It’s given him a chance to refresh, relax and spend time with his family, something that he never got a chance to do as much of when he was working full-time.

“(Being away from home) hasn’t been as bad for the last five years — and certainly now. I worked WrestleMania weekend, and then I didn’t work for the rest of April, I took it off and stayed at home. My son had spring break, so we had a chance to just chill. I can kind of choose when I work and when I don’t now. I’m not under anybody’s thumb in that respect.”

“I get to enjoy a day like today (at the CWI show), when I get to go out and see some of my friends. I haven’t seen Hulk since I left TNA. I had dinner last night with Ted DiBiase. So, I get to see old friends that I haven’t seen in years, so that’s always nice. It’s a special fraternity, especially guys in the 20-plus years group. There’s not a lot of us left.”

Bob Kapur is like the “Danny DeVito twin” to Kevin Nash. He can be e-mailed at [email protected].