Mosca’s autobiography a ‘must-read’ for CFL and wrestling fans

Before reading Angelo Mosca’s autobiography, Tell Me To My Face, I already knew that some aspects of his personality were exaggerated self-promotion, and some a genuine reflection of a talented athlete. But to say I was shocked by the intimate details of his life and times, brilliantly put together with Steve Milton, doesn’t begin to describe my reaction to what he had to overcome. 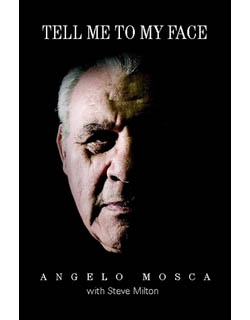 Shamed into denying his mixed-race parentage, brutally beaten by his alcoholic parents, emotionally abused, and having to fend for himself holding two and three jobs through school only to find his money was stolen, it’s a miracle he achieved the stardom he enjoyed. A special inserted section with his sister Carol only reinforces how deep the hole the six children had to climb out of. Brushes with authorities (barely hinted at in the past) for running gambling rings and stealing typewriters — now that’s a specialty — almost washed him out of football. But the connections of a Notre Dame football backer got him into Hamilton, and the Steeltown took to Angelo like a native son, which he eventually became.

His insights into the CFL of a bygone era, of two-way duty, friendships with the likes of Bronko Nagurski Jr., personality clashes with coaches and players, the 1962 Fog Bowl, and a very under-rated 1967 championship squad he maintains was the best of all-time (and may have been) are a rarity for the detail and honesty. The fairy-tale ending of his career with a 1972 home-field Grey Cup win is revealed to have almost been derailed by management. And thus began a new full-time career in the wrestling ring after many years of off-season tours in Canada and the Pacific.

Mosca tells of tension between him and fellow former gridiron star Wahoo McDaniel, travel with Superstar Billy Graham, and his profitable rivalry with Canada’s Greatest Athlete, Gene Kiniski, propelled in Winnipeg by a charity event he couldn’t remember the name of, Shmockey Night (hockey with a tennis ball).

Along with an interesting recap of his promoting career and dealings with Jim Crockett Promotions and Vince McMahon, the old pro opens up about his three marriages, strained family relationships, and the constant pain after a lifetime of hard hits and big bumps. An appendix of his football highlights and many of his bouts, and an index round out a very well-put together book.

Alas, my own personal Mosca story didn’t make the cut.In 1998 the Grey Cup game was coming to Winnipeg, and when I found out that the Press Club had no special plans for the occasion, I pitched them an idea: A Tribute to Angelo Mosca.

My dad, who had been a very big CFL fan, absolutely hated Mosca the Hamilton Tiger-Cats defensive tackle (and hated him even more as a wrestler). What better way to rib my late father than to host an evening of praise for the dirtiest player in the CFL?

To my shock, they forked over the fee and let me run with the idea. It was attended by many of the national sports media and was highlighted by the awarding of a #68 jersey — of the Winnipeg Blue Bombers — by the quarterback Mosca had many times tried to cripple, Kenny Ploen. I also taped a short film with Angelo, a comedy piece where every time we turned a corner in the grand Marlborough Hotel, beautiful girls swooned at the mere sight of the swarthy tough guy while he mugged for the camera.

Perhaps I’m a little biased because of the connection I feel to my own father because of doing that event years ago with Mosca — did I mention how much Dad hated him? — but in my opinion this book is a must-read for fans of the old CFL, old-school pro wrestling, and even for non-fans, as a study of the effects of racism on Boston and U.S. society in the World War II era, Tell It To My Face is a very important first-person account.