MONTREAL – The Claude-Robillard Center, where TNA Impact Wrestling held its show Friday night in Montreal, hasn’t had any wrestling since Edouard Carpentier held wrestling classes in the mid-1990s. But 750 fans turned out for an enjoyable show. 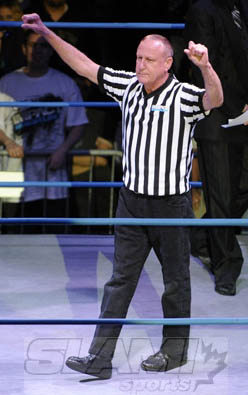 Earl Hebner is still the most over heel when he’s in Montreal. Photos by Minas Panagiotakis, www.photography514.com

The announcers were Christy Hemme and JF Kelly, who has worked on the French version Impact Wrestling on RDS right from the start.

The attendance was actually very good considering that in 2007, TNA drew 800 with a product that was much better than what it is today. This time, instead of promoter Devon Nicholson, it was long-time ring announcer and commentator for Impact Wrestling on RDS, Marc Blondin, as the promoter.

Here are the results:

Austin Aries beat Brian Kendrick: Brian Hebner got booed when announced! Yep, 14 years after and even if he had nothing to do with “The Montreal Screwjob.” Aries had an “Austin Aries” chant right from the start like he was that big babyface even though he works heel. That Montreal crowd again! They really worked a ROH style match with great wrestling and high flying and a lot of near falls. Very good match.

Christy Hemme announced Earl Hebner as the most controversial referee in the history of wrestling. He came to the ring with people booing the hell out of him. He was wearing his t-shirt “Damn right I did” and put Bret Hart’s sunglasses. Again 14 years after and again that Montreal crowd just went nuts for it.

Brooke Tessmacher beat ODB Okay match. ODB got the over throughout the match, before being kissed by Earl which led to the finish with Tessmacher pinning ODB.

Bully Ray came to the ring. People started chanting “E-C-Dub” and he cut them off doing a good heel promo that got over. Then Mr. Anderson came and did his usual stuff. 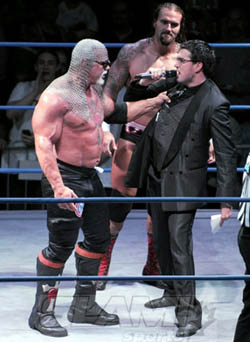 Bully Ray beat Mr. Anderson Nothing too say except it was the worst match on the show so far.

AJ Styles beat Christopher Daniels They gave the performance you’d expect sonce they’ve known each other for so long. Styles won with his Styles Clash after 15 minutes. Match of the night so far.

Beer Money Inc beat Scott Steiner & Gunner Steiner got a huge “You can’t wrestle” chant. A whole lot of heat in the match. Steiner was super over as a heel and Beer Money Inc got a very strong babyface reaction. Of course, they got the win!

After two hours and ten minutes, the show was over and the crowd was still into it because it didn’t go too long.

As with the last time I went to a TNA, er, I mean an Impact Wrestling show, the house show was so much better than the TV or PPV shows. The only logical answer to that is that they are not overwhelmed with bad storylines or booking that makes no sense. They just go out there and wrestle.

Saturday night, TNA is in Sherbrooke and Sunday in Trois-Rivieres.