The scene Wednesday night was Carmen’s Banquet Centre in Hamilton, Ontario, a packed venue with some of the biggest names from the world of sports and media. 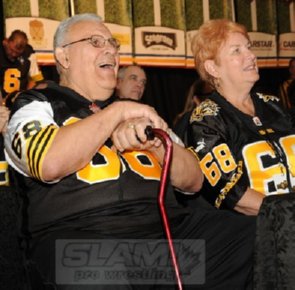 Angelo Mosca, with his wife, Helen, laughs from ringside at Still Mosca on Wednesday night. Photo by Mike Mastrandrea

There was retired NHL star Doug Gilmour, boxing’s George Chuvalo, and far too many football players to name, including Canadian Football Hall of Famers Russ Jackson, Chris Walby and Terry Evanshen, as well as current Hamilton Tiger-Cats quarterback Zach Collaros. Hall of Fame broadcaster Brian Williams was there, as well as the Mayor of Hamilton, Fred Eisenberger.

From the world of wrestling, trouble was moving a little slower than it used to, but there were the reunited Love Brothers — Rotten Reggie, who still lives locally, Handsome Hartford, in town from Spaniard’s Bay, Newfoundland and Labrador (his son, Brian Hutchings, played in the CFL and was there too), and Beautiful Bruce Swayze, up from Kentucky. Plus there was The Wolfman Willie Farkus, The Destroyer Dick Beyer, Roger Francoeur, and “The Executioner” Ernie Moore was making the rounds, but then that’s his regular job as head of security at Carmen’s. There was also a bout between Hornet, dressed in the hated Toronto Argonauts gear, and Freedom Wallace (Andrew McRae), wearing the black and gold of the home team.

But really, the night, organized by his children Angelo Jr. and Jolene, was all about Papa Mosca.

When King Kong, the ol’ Big Nasty, was diagnosed with Alzheimer’s earlier this year, word spread quickly and momentum built to a massive thank you for Big Ang. At Thursday night’s Ti-Cats game at Tim Hortons Field, his #68 uniform will be retired, only the second retired number by the club (#10 Bernie Faloney is the other).

To give the crowd some idea what Angelo Mosca meant to his adopted country of Canada — he’s from Waltham, Mass., originally — Walby, now a football announcer, shared a story. Walby was a pretty big name in Winnipeg, an award-winning offensive lineman with three Grey Cup rings as a Blue Bomber.

One time, he took Mosca to his favourite watering hole in the ‘Peg, the Palimino, and the people were all over him, wanting to talk to him, get his autograph; Mosca was that big a deal, and loved to play along, offering up headlocks for photos.

“You can go to any city in Canada and people know who you are,” Walby said to Mosca, seated at ringside, from inside a wrestling ring centred in the hall. 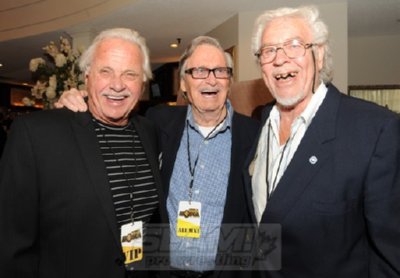 Mosca’s sister spoke early in the evening, after the guest of honour came out to Tina Turner’s “Simply the Best.”

Referring to the slow progression of Alzheimer’s, where memories are slowly eradicated, she prayed that the bad memories fade first, only leaving joy, and that she was proud of her brother for “facing with courage the longest goodbye.”

The evening was not all maudlin, however.

The host was comedian and radio host Mike Bullard, who was almost caustic at times, teasing to the point of uncomfortableness; other times, he was funny, like his address to Mosca: “Before you’re too far gone, do you have the twenty bucks you owe me?” 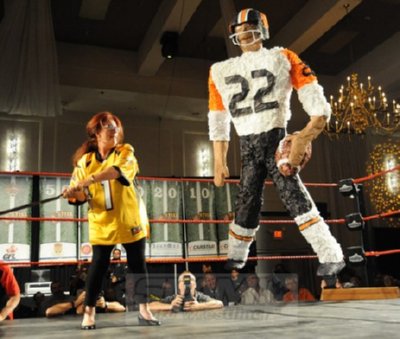 Joe Kapp gets a beating.

Pigskin Pete, Ti-Cat supporter, ran a lively auction mid-ring, for Grey Cup travel packages and more. The wildest bidding was for a chance to whack a piñata of Mosca’s greatest nemesis, Joe Kapp, the quarterback of the British Columbia Lions who famously reignited an old feud at the CFL alumni luncheon in Vancouver during the 2011 Grey Cup week. The cane that Mosca used to whack Kapp was used by the winning bidder — $4,200 — to destroy the Kapp effigy. “That’s what we call Hamilton foreplay,” Bullard cracked after the destruction was done.

Greg Oliver first met Angelo Mosca in a Casey’s restaurant in Waterloo in 1986, in the days of Pro Wrestling Canada. Greg can be emailed at [email protected], and you can follow him on Twitter @gregmep.