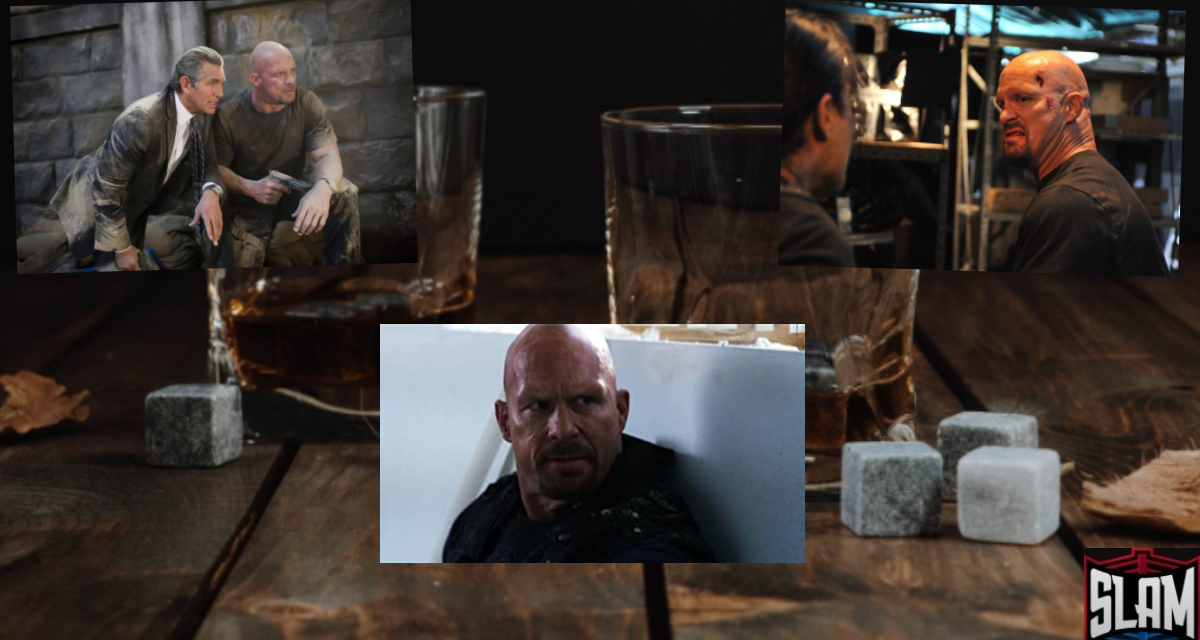 Welcome to another run at Squared Circle Cinema and Shots, an ongoing column where you watch your favorite wrestling superstars on the big movie screen and address the all-time question:  What the f*** are you watching?!  How good or how brutal the films are, as always, will be judged by the number of shots it takes to tolerate the viewing, or if you tap out from the sheer stupidity of it all.  As always, we will never tell you what to drink, nor will we peer pressure you into doing, though … I am saying after this column, ya may wanna consider.

After four columns of pro wrestlers that have done either a great job (Dwayne Johnson), a good job (Dave Bautista, “Rowdy” Roddy Piper), or just did the job (John Cena), it’s time we step away from these Four Pillars of Film, and jump into those movies that will test the limits of plotlines, common sense and decency, and mostly how functional your kidneys are afterwards.

So it’s only appropriate that we dive into the macho movie magic of The Texas Rattlesnake himself:  “Stone Cold” Steve Austin. (WHAT?!)

What seldom gets discussed are the films he did once he stepped away from the squared circle.  Slam Wrestling touched on one of his movies, The Condemned, but there are some movies that are worth seeing (or unseeing, after you read this), so let’s start slow and jump into a movie most people enjoy…

This movie addressed one of the questions I’ve pondered:  How many leathery looking men would it take to make a Naugahyde couch (seriously, Dolph Lundgren alone would be enough material to make an ottoman)?  Anyways, a group of mercenaries for hire, The Expendables, led by Barney Ross (Sylvester Stallone), are given their next target by the mysterious Mr. Church (Bruce Willis): to kill the corrupt General Garza (David Zayas), who is the dictator of the Vilena Island in the Gulf of Mexico. Mr. Church offers 5 million dollars and Barney travels with his partner Lee Christmas (Jason Statham) in their plane to Vilena to meet their local contact, Sandra.  Little do they know that the island is a front led by a rogue US Agent James Munroe (Eric Roberts) and his right hand man Paine (Steve Austin himself), who are using the island to grow coke.  When the chips are down, it’s up to The Expendables to deliver the action.

There are times the testosterone is so thick, even the Olympic committee swears someone is doping (honestly, you can take your pick).  But with Stallone (who wrote and directed the movie) keeping the pace going, especially through some outright ridiculous stunts, it does provide some fun as well.  As for dialogue, there are plenty to pick and choose from any of the stars.  But for “Stone Cold”, they are scant to find.  This was the best I could find:

James Munroe: First of all, I don’t feel comfortable talking business with a giant carrying a shotgun.

The Brit: Pretty boy wouldn’t give it up.

Gunnar Jensen: Not if you wanna know where they are.

James Munroe: What do you know?

Gunnar Jensen: I used to be one of them.

James Munroe: Why are you turning on them?

James Munroe: We settled on 50.

Gunnar Jensen: No, math whiz. We settle on 100 grand upfront, in my pocket!

The Brit: This geezer’s a bloody joke.

This is a movie with so much tough guy talk, it is a love letter and a throwback to 80’s-style action films, and with the sequels afterwards, you can’t say no to a winning formula.  Stone Cold seemed to adhere to this formula longer than necessary, and went on to do some other films with The Nasser Group North, and was also a producer on some of those films.  If I had to explain Nasser, they are the poor man’s Cannon Company, and their films suggest they probably raided their script vault in a fire sale along the way.  So, let’s belly up to the next film…

When a training exercise for a misfit LAPD SWAT Team, led by Captain Tate (Austin), Hunt (Michael Jai White), and Jannard (Lexa Doig) in an abandoned hangar goes terribly wrong, they find themselves pitted against Russian and Italian mobsters.  It’s up to Tate to help his team get out of this terrible siege, armed with nothing but blanks in their guns and their wits.

There are some familiar faces in Jai White, and the rest of the cast have appeared in other things like Stargate SG-1 (Michael Shanks), and Keith Jardine is recognizable as a former UFC Fighter.  As for any other bon mots in this film, it’s a little better, but not by that much.  Here’s another couple of gems like how to handle a hostage negotiation:

Tate:  This is exactly why the chief is pissed off. All right. Now the hostages are kids, right?

Tate:  The negotiator has the money on hand, right?

Tate:  The dude says he’ll come out if you get this cash, right? He’s gonna come up peacefully. So then the solution to the problem would be…anybody?

Tate:  The solution to the problem: make a breech from the rear. Bring the flashbangs, and the tear gas, because you can never be too sure. Then you come in with an M40, and you shoot the sonofabitch. The part you guys seem to forget all the time is to bring lollipops and blankets for the kids. Am I right? Am I right?!

Or, try this one on for size

Vladimir: [scoffing at Jannard while she’s down] Send a bitch to do a man’s job…

Tate: [charges and starts beating on him] You’re right. They *did* send a bitch to do a man’s job.

I can honestly say … I saw it, and it was real.  Clocking at ninety minutes and those shots I just took, it wasn’t too bad if you need mindless fun.  Which makes this next film in the Nasser collection practically Shakespearean…

A drifter named Ryan Varrett (Steve Austin) is a vigilante with a past, and is on a path of revenge, that finds in in the poorly named Hope, WA.  From There, Varrett finds himself in the crosshairs of the local biker gang The Circle, leg by Drake Salgado (Danny Trejo), and his brother Rex (Noel Gugliemi….yeah, that guy!)  Of course, Keith Jardine make his presence known as Crab in this straight-to-video classic.

As for dialogue to really sink your teeth into, this is a harder one to find … or, the “genius juice” really has addled me to the point that I don’t recognize speech anymore.  It’s like a slurry of sound at this point.  Even with Danny Trejo, it’s not that good.  But with the right drinks, it turns into … still a movie that I found hard to get through.

I think that last film broke my brain, and my liver.  It’s probably why (even by his own admission) Austin stepped away from films and focused on podcasting.  If you are going to find any joy in this production, then know that Danny Trejo is in this film, and just focus on that. As for the rest, a big middle finger (it would be two, but I’m about ready to pass out).

As for me, I need to recover from these films, so save me a seat and a shot (I’m gonna need the Hair of the Dog sooner than later).