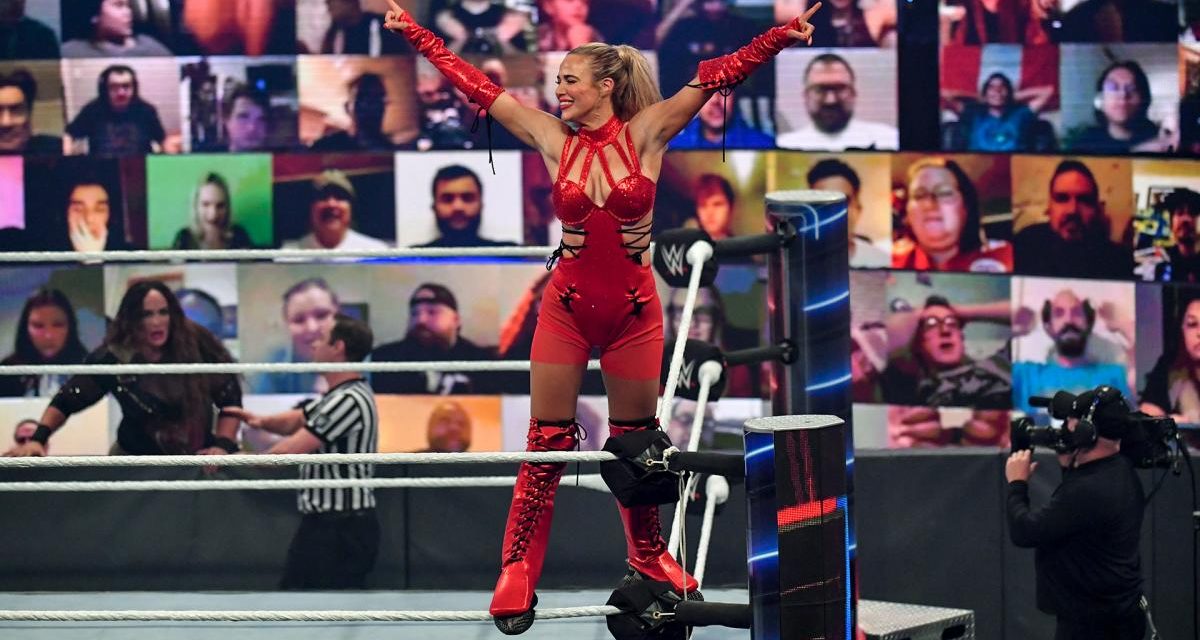 Lana is making true on her promise to spill the tea on her time with the WWE.

On the Talk is Jericho podcast CJ Perry (formerly known as Lana in the WWE) revealed that the Samoan family, faction, uses their influence backstage to lobby WWE management and that the women are not treated the same as the men backstage.

Perry recalled an angle with Nia Jax in which she was being put through a table every week on WWE TV. It was supposed to happen a tenth time, a final time, on the Survivor Series pay-per-view. The table spot at the start of the women’s match was meant to knock Lana out for the rest of the bout but she would make a comeback in the end, winning the match for her herself and her team.

“We were supposed to do this whole table spot on the show and then Roman did not want it to happen, because he had a table spot with Sheamus. There was some major pushback from the Samoans, Nia and Roman, you know. I was caught in the middle of this big drama,” she told Jericho.

It was not the first time either that a women’s segment was cut short or removed. Lana explained how what the women doing, their angles are not on equal footing backstage no matter what is shown on WWE television or in the public eye.

She recalled a time when her promo with Natalya was cut short.

“I was going out with Nattie to do a promo and they cut our time. You know, Bruce (Prichard) is like ‘Cut it by like five minutes with Billy Kidman’. The guys went over. It was the typical guys going over the girl segments and the girls get…you know. It is what it is. It was supposed to be a six minute promo segment. I had to do it in three minutes and I knew how to do so. We got it down to exactly 2 minutes and 99 seconds because there were no fans and I knew exactly what I could cut out and what would fit that time,” she said.

Perry maintains the WWE did punish her by removing her from WWE TV for three months when she celebrated her engagement to Miro on social media despite her being in an angle where she had left Miro for Bobby Lashley.

Perry went on to say that since Triple H, Fit Finlay and others are working exclusively in NXT, the women on the main roster have been left with very few mentors and to their own devices when it comes to learning and improving, being given direction.

“Road Dog (Brian James) really mentored us. He really taught us a lot about cameras and when to take TV shots. Unfortunately a lot of the women don’t get mentored as much and neither does the women’s division. At one point Triple H was there and really hands on which is great because there’s so much knowledge there but over the last year it hasn’t been that good. Fit Finlay was also working very, very much with the women, helping out. TJ (Tyson Kidd) is also amazing. He’s helped me to just understand sports and wrestling so well but I felt really lucky to be able to be with the boys because I learned so much from the greats. Greats like John Cena, yourself and being ringside, constantly hearing the noise hearing what it means to be ‘over’. A lot of times we in the women’s division don’t get to hear that and because we don’t have you in the ring with us, we are literally teaching each other,” she said to Jericho.

Perry explained that she was at home with her family, texting Mandy Rose, when she learned of her firing during a phone call with John Laurinaitis. She was stunned because she had just paid $4,000 for new ring gear to wear as part of the new tag team with Naomi. She revealed the team was promised that they would eventually beat champions Nia Jax and Shayna Baszler and have a championship run.

“I was literally standing right next to the pool. My heart dropped but at the same time I felt really relieved, which was really weird because I did not expect to feel relieved. I felt like a weight had been lifted off my shoulders and I could breathe again,” she said.