Squared Circle Cinema and Shots #3: You Can’t See John Cena (if you drink too much) 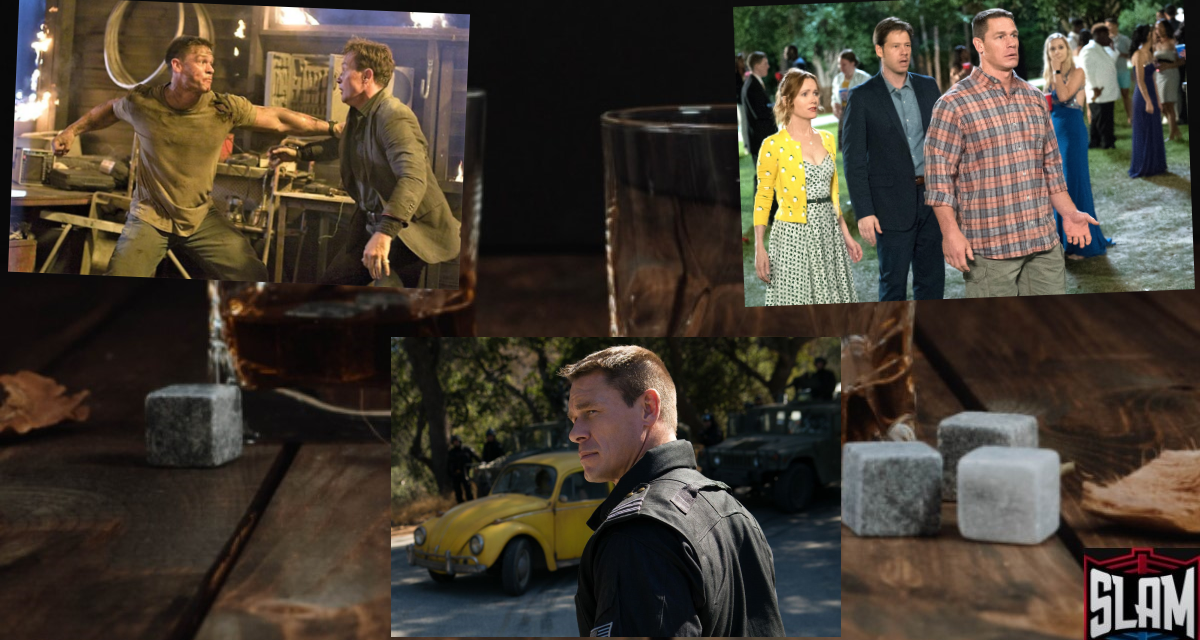 So glad you can come back and enjoy Slam Wrestling’s Squared Circle Cinema and Shots. If you’re new to the column, we explore those grapplers who’ve gone on to the silver screen (or streaming … or VOD, depending), and see how their performances have fared, and how many drinks it’s going to take to tolerate them. The need to drink less will determine how good the movie and the actor is.

Of course, it doesn’t matter what you drink (I don’t peer pressure … anymore). Just be safe and drink responsibly. Or drink juice, for all I care (I’m not your parents.  You can make adult decisions.  Unless you’re in Utah, and that’s a whole other discussion).

Now when it comes to wrestlers and acting, I thought about what drinks can be too stiff to handle by themselves, yet when mixed together with other ingredients, they can produce a cocktail that is delightful and makes the alcohol itself tolerable.  As an amateur mixologist, this made sense to me when considering the next wrestler-turned-actor. In continuing the third of our four-part series, “The Four Pillars of Film,” this next entrant comes off a bit strong, not only in the ring but also in his promos. It kept going when he started his acting career, but with the perfect mix of action and comedy, he can be quite disarmingly delightful.

Our focus will be on none other than John Cena.

With the upcoming movies F9 (finally set for a release on June 25th in North America) and The Suicide Squad coming in August, and the TV series Peacemaker (which will come to HBOMax next year), now is the time to take a step back and see the progress he’s made over the years.  So let’s go way back to his first movie debut as…

John Triton (Cena) is a Marine who returns home after being dishonorably discharged. As he and his wife Kate (Kelly Carlson) decide to go on a couples’ trip, a group of murderous diamond thieves on the run led by Rome (Robert Patrick, the T-1000 himself) has kidnapped his wife, and John goes on a chase through the South Carolinian wilderness to retrieve her. This film was done around the time Cena started to transition from the “Doctor of Thug-A-Nomics” to his “Super-Cena” shtick he was doing in the WWE. We’re all familiar with Robert Patrick as the T-1000 from Terminator 2. As for Kelly Carlson, she used to be in TV shows like Nip/Tuck, so this would have been her first big feature role.

As for quotable lines from the film, this is all I could muster:

Kate Triton: I know it’s not gonna be easy for you, John. We’ll figure it out together.

Depending on your level of tolerance (for booze or bad films), this film is “so bad it’s good,” or you hope for the sweet embrace of a blackout. That’s for the entire film itself. If I have any faults or harsh words, it’s for Robert Patrick (he knows better than to do this). Cena, on the other hand, was just going along with what the script told him to do. You could argue that is a good summation of his time in the WWE, even when crowds booed him: he just did what he was told. Even though his performance can be charitably described as a jacked-up John McClane, there were flashes of charisma that hinted he can be capable of more.

It wouldn’t be until the next decade we got to see different sides of Cena. Even though he was doing small parts (no doubt due to his heavy wrestling schedule), seeing Cena in Trainwreck and Sisters hinted he was more than just a generic Action Jackson. So the ability to combine and transform those skills are appropriate for our next film…

A prequel to the movie franchise by Michael Bay, the Autobots, led by Optimus Prime, had begun making preparations to leave the planet Cybertron. With the Decepticons hot on their tail, Optimus sends a young scout, B-127, to Earth in order to set up a base of operations where the Autobots can regroup. B-127 reaches Earth alone in 1987, crash-landing in California and disrupting a training exercise being conducted by Agent Burns (Cena) of Sector 7. Burns presumes B-127 to be a hostile invader and attacks, driving B-127 into the forest, where he is then ambushed by a Decepticon, who tears out his voice-box and damages his memory core. Before entering stasis, B-127 scans and transforms into a yellow 1967 Volkswagen Beetle, where he is found by our heroine Charlie (Hailee Steinfeld) coping with losses of her own.  As they bond and find friendship, Burns hunts for the robot, and gets entangled with two more Decepticons, who are also hunting the newly christened “Bumblebee,” and wanting to corrupt Earth.

Steinfeld is primed for a big audience in the upcoming Hawkeye show on Disney+, and the movie also features Pamela Adlon, from shows like Louie and Better Things, as Charlie’s mom who wonders why her daughter can’t be happy and questions her working on the VW Beetle. Cena is serviceable in this film as a hard-nosed, G.I. Joe-type who more aware of what’s going on than most of the characters in the film.  This line from the film best sums up his character and the franchise:

Agent Burns: They literally call themselves Decepticons. That doesn’t set off any red flags?

This movie gets 2 shots of Jägermeister and a California Surfer for: malfunctioning paint guns, really close encounters of the Cybertron kind, Blitzwing smackdowns, Hot Dog on a Stick hell, sweet ’80s tunes, Decepticon torture, a Smile to Change the World, more than meets the eye, bonding with Bumblebee, John Hughes teaches life lessons, Cena sums up the movie, Sector 7 origin stories, sunroof fun, peer pressure off a pier, helpful shame spiral, step away from the ’Bee, Iron Giant vibes, The Smiths as a great communication tool, convenient cranes, Bumblebee unchained, a hearty salute met with a raised fist pump, and a big hug from a big robot, and sappily enough … “Don’t You Forget About Me.”

The times that Cena appears (because, let’s face it, it’s all about robots smashing robots, in the end) again hint at the possibilities he can bring to a role given enough space and time. This may be due to the fact that he was winding things down in the ring with WWE, so he could devote more time to projects like this. Plus, this is the one Transformers movie that is more tolerable than the entire franchise put together (don’t @ me). Just like I mentioned before with Dave Bautista, when Cena is surrounded by the right people (or robots) he can be really good. Which is a perfect segue to the role…

By the same team who brought you Superbad, single mother Lisa Decker (Leslie Mann) drops off her young daughter, Julie, for her first day of kindergarten. She watches on as Julie is joined by two other girls, Kayla and Sam. Kayla’s dad Mitchell (Cena) and Sam’s dad Hunter (Ike Barinholtz) introduce themselves and become close friends after seeing the bond between their children.  Years later the three have drifted, and it’s only when prom night rolls around that their daughters Julie, Kayla, and Sam (played by Kathryn Newton, Geraldine Viswanathan and Gideon Adlon) decide to form a sex pact to lose their virginity that night. When Lisa discovers their plan, she, Hunter, and Mitchell get together to stop this at any cost … with hilarious results.

Leslie Mann (This is 40) and Ike Barinholtz (Neighbors) are no strangers to ensemble comedy, but it’s Cena that really deserves the credit here for playing up his ridiculousness, and you can pick any scene he’s in where he a complete clueless dad like:

Or try this one:

Mitchell: I can’t even hug my daughter anymore without feeling her boobs.

If you dig the same humor as Superbad, then this is just the movie for you, and Cena showcases more of his comedic skills. It helps that his co-stars help him drive the physical and verbal comedy home, and more importantly, it shows his humanity and humor inside a very large physical frame. But doing more roles that can highlight the physical and verbal prowess he possesses will ensure fans will come out to theatres to see more of his acting chops.

Can that continue his momentum moving forward into the next decade, or will a bad role Cena takes going forward ensure that we can say (without irony), “We can’t see you?”

That is a film for another time to review, so until next month remember: Save me a seat and a shot.

Squared Circle Cinema and Shots: The Evolution of the (Acting) Animal, Dave Bautista