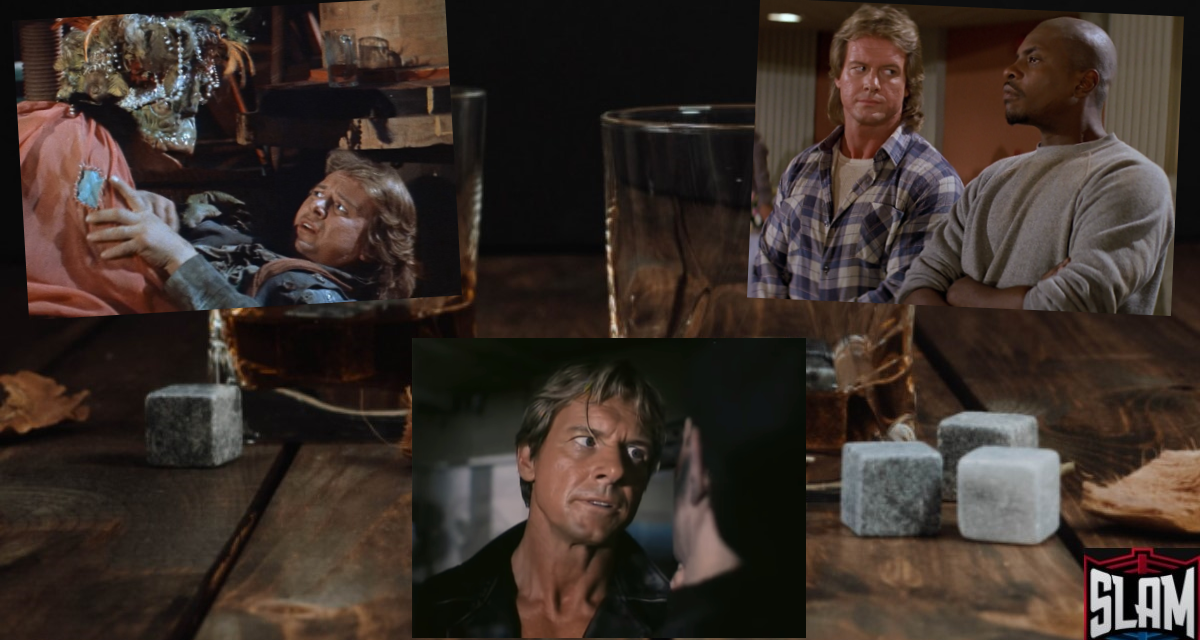 Welcome to another Squared Circle Cinema and Shots, the only column that dares to watch wrestlers become actors, and to ask the all-important question:  how many drinks does it take to tolerate what I just saw? Depending on the movie, and the beverage, please try this at home. Or, drink cold brew coffee, if you want to feel amped without major after effects for after the film.

Consult your local bartender/mixologist/life coach (they’re all the same) and see if this column is right for you.

As we arrive in the final part of our four part series, “The Four Pillars of Film,” there is only one man that stand above all the subjects discussed thus far, and embodies their best attributes. This man exudes more charisma than The Rock, is surrounded by great talents like Dave Bautista, and can mix action and humor better than John Cena.

That man is none other than “Rowdy” Roddy Piper.

Much has been mentioned of Piper recently, from his A&E Biography to his comic books, but his films earn Piper a cult-level status of cool that would rival that of Bruce Campbell. So what better way to dive in than with these great films, starting with…

(Author’s Note: In the spirit of Piper, instead of tackling the movies chronologically, I’ll tackle them by the amount of drinks I need to fully appreciate this awesomeness.)

After a worldwide nuclear war, where two thirds of the male population was wiped out and virile men becoming a rarity, Sam Hell (Piper) appears as a scavenger and a highly virile man, is captured and tasked by Spangle to help rescue a group of fertile women kidnapped by humanoid frogs in the town of … In addition to Piper, most notable in the cast is Sandahl Bergman, who was Valeria in Conan the Barbarian. She plays Spangle, a scientist who has a love/hate relationship with Sam Hell. As for the Piper witticisms, try this for size:

Sam Hell: Hey, you try making love to a complete stranger in a hostile, mutant environment, see how you like it.

Final Thoughts: Essentially, this is Escape from New York, but dumbed down a shade. This is late-night movie fun at its best, and Piper is every bit the macho him-bo he portrays on screen. But the banter with Bergman is equally awesome, and she has proven that she can handle muscle heads of all kinds during the ’80s.

Of course, if you want something “gritty” the ’90s serves up a great feast with…

In this film, Piper is Lt. Jake Cornell, an undercover cop who works his beat in the no-man’s land notoriously known as “Jungleground.” When a sting operation with a fed goes awry, he gets caught by the local gang, the RagnaRockers. Odin, the head of the gang and would be drug lord decide to play a game with Cornell: he is given until morning’s light to make it out of the Jungleground alive. Odin and his men however are hunting Roddy; and Odin also has a little insurance, he’s kidnapped Roddy’s soon to be fiancée.

This is a very ’90s (and dare I say, very Canadian) take on gritty dramas that were all the rage in this time period. As for other notable star, only JR Bourne, who plays Odin with B-Movie baddie glee, deserves special notice. He recently played a meth lord on season three of Mayans on FX.  Not as much banter for Piper to play with, but boy, he gets those zingers in, like:

Lt. Jake Cornel: I’m sure they’ll be a force to be reckoned with … when they hit puberty.

Final Thoughts: One a scale of one to Steven Seagal, Piper is Laurence Olivier in comparison. This movie doesn’t do much, and you can smell the “direct-to-video,” but as mindless action movies go, it is a bit of a treat, but the only issue is that it lacks the panache that Piper is famous for in his promos. If you do watch this, be prepared for the preposterous plot, and drink it away. Then chase it with the greatest film ever…

OK, folks. You should know this one by now. Horror master John Carpenter (Halloween, The Thing) directs this thriller/satire on 1980s consumerism and commercialism in America. Aliens are systematically gaining control of the earth by masquerading as humans and lulling the public into submission. Humanity’s last chance lies with a lone drifter (Piper) who stumbles upon a unique pair of sunglasses that reveal the terrifying and deadly truth.

If you watched the recent Biography episode, Carpenter wanted Piper to portray the hero, Nada, because he resembled a hard-working man and his rugged features fit the bill. Also, it helps that Piper actually lived his early years as a vagabond on the streets, so there is a certain realism to his performance. He also works well with fellow castmate Keith David (who’s also been in Carpenter films like The Thing and recently been in The Nice Guys and Pitch Black), and have a fight choreography that is the stuff of Hollywood legends (and South Park parody). As for quotes, you can pick and choose from gems like:

Nada: You see, I take these glasses off, she looks like a regular person, doesn’t she? Put ’em back on…

[puts them back on]

Or how about this:

Frank: I have a job, now. And I plan on keeping it. I’m walking a white line all the time. I don’t bother nobody, nobody bothers me. You better start doing the same.

Nada: White line’s in the middle of the road. That’s the worst place to drive.

And of course, there’s the classic line. Say it with me, kids…

Nada: I have come here to chew bubblegum and kick ass… and I’m all out of bubblegum.

This movie is well worth 2 shots of Scotch and a Bloody Mary Queen of Scotch, for hard time blues (apologies to Dusty Rhodes), homeless camps, television on the fritz, churches of mystery, strange signals, Nada is smarter than the average Piper, clandestine meetings in church, unnecessary police violence (timely, isn’t it?), strange sunglasses, worst advertisements ever, formaldehyde faces, clothes lining cops, chewing bubblegum and kicking ass, best fight sequence ever, wake up calls, raids on resistance, wormhole wristwatches of convenience, traitorous humans,  and you best believe … the revolution will be televised, and it will be live!

Final Outtake: Say what you will, but this movie is *the* benchmark film that many wrestlers try to aspire, and come up short. It has a great cast, a great story that really speaks to the issues of over consumption of the ’80s — and probably speaks to today’s culture as well. It even inspired street artist Shepard Fairey with his “OBEY” artwork. You can watch this over and over again, because … This Is Your God.

Well, after four movies with the “Four Pillars of Film,” what wrestler will step up to the bright lights of the big box office? Guess you’ll have to wait next month to find out, so be sure to save me a seat and a shot.