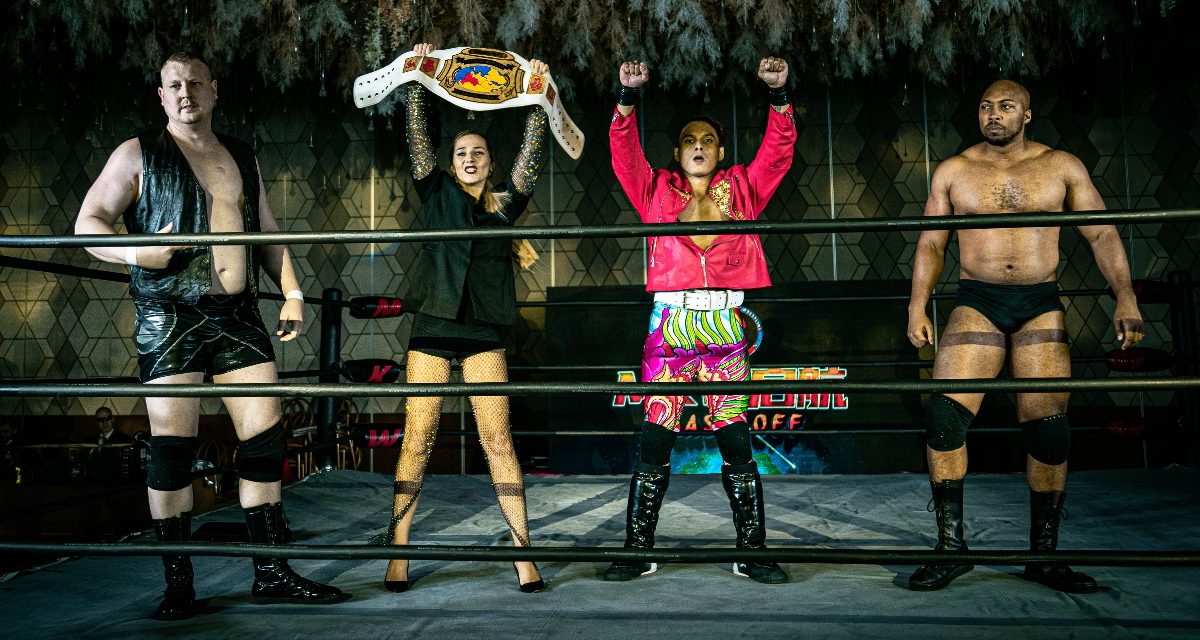 Cold Open studio promo from Cold Ray. He says Zombie Dragon may have zombified Little Johnny, but it’s Coldray that made him in the first place and with or without Johnny he’s still the best.

After the intro Xiao Jie Men recaps last week and gives us this week’s line up.

Poseidon and Tao start. Their fast paced exchange leads to both of their bigger partners being tagged in. Plata shows off his power here and Steve his cunning, ultimately backing off and tagging in Tao, Plata follows suit. 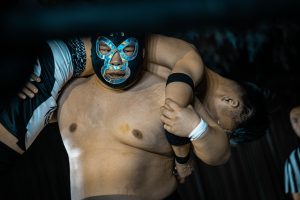 The cruiserweights again exchange at a fast rate, this time while bouncing rope to rope. A dropkick to the back of Tao’s head while seated gives us the first pinfall attempt for two. Mascaras are in control and Plata gets tagged in. After a double team Plata hooks on a Boston Crab but Steve runs in to break it up. This allows Tao to take control briefly until he jumps off the middle rope and gets caught by Plata then spine bustered. Poseidon comes in hot and has Tao in trouble until he misses a kick and gets crotched on the middle rope. Tao lays a beating on Poseidon then tags in Steve.

Steve continues the punishment but after tagging Tao back in the tables are turned. Poseidon comes off the middle rope onto both men and tags Plata who lays out both opponents then tage in Poseidon again. They double flying jalapeno Tao but Steve breaks up the pin. Steve puts both men down.

Steve and Tao tag in and out under Steve’s discretion. A pedigree on Poseidon by Tao ends it. 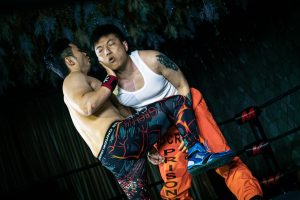 Clod Ray knees Aegon in the gut (Photo by MKW)

Headlock exchange to start followed by a basic rope to rope but Cold Ray cuts it short with a shot to the gut. He unloads a variety of strikes and caps it off with a fisherman buster for two.

Cold Ray unloads forearms that Aegon is inexplicably able to shrug off and the two begin to exchange shots. Aegon’s win out but he gets stopped with a clothesline.

Cold Ray maintains control at a methodical pace until Aegon catches a kick and hits a line. He ends up putting Cold Ray in a weak sharp shooter. Rope break.

Cold Ray counters a fireman’s carry into a codebreaker for the win.

A brief promo from Team ESL. Steve tells Tao to listen to him and they will keep succeeding.

The big men Buffa and Saga start off. Saga keeps getting the upper hand so Buffa tags in Chen who asks for Cui and Saga obliges.

Chen can’t budge the bigger Cui. Cui shows off power and athleticism but Chen one ups him in high flying and keeps the high risk offense going until Hui catches a kick and delivers a cartwheel head kick of his own. Cui and Saga tag in and out isolating Chen. They brutalize and mock him. Saga slips off the middle rope allowing Chen to roll to Buffa for the tag. 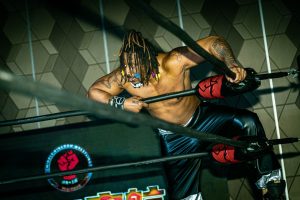 Buffa eagerly waits to be tagged (Photo by MKW)

Buffa comes in on fire and repeatedly drops Cui. He hits the “Hey Ho” full nelson slam on Cui but Saga escapes and head kicks him. Chen disposes of Saga with a knee and both roll outside.

Cui places Buffa on the top but can’t slam him off. Buffa counters into a super X Factor for the three.

Ash enters to confront Chairman Al who is on the big screen. Al pores over the box he has been teasing Ash with for weeks while drinking champagne. He says that he has been through hell and back to get the object that it’s in that box all the way to China for Ash Silva, and now, he’s ready to present it to him. Queen Marie enters carrying a bag. Ash opens it revealing the Belt and Road Championship vacated during Nuwakote Tiger’s reign. Ash begins to pull it out but us jumped from behind by Lee Junyan. 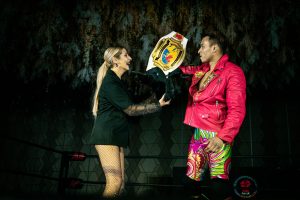 Big Sam comes out to even the odds. Black Mamba and Bamboo Crusher who take control. Final Stablemate Uncle Money enters and lays Crusher and Mamba out.

In the end the Stable stands tall in the center of the ring as Queen Marie holds the Belt and Road Title high.

A mediocre episode. The Stable didn’t do much but they continue to be the most intriguing part of MKW.