Behind the Gimmick Table: Pigozzo establishing a new legacy in North Bay 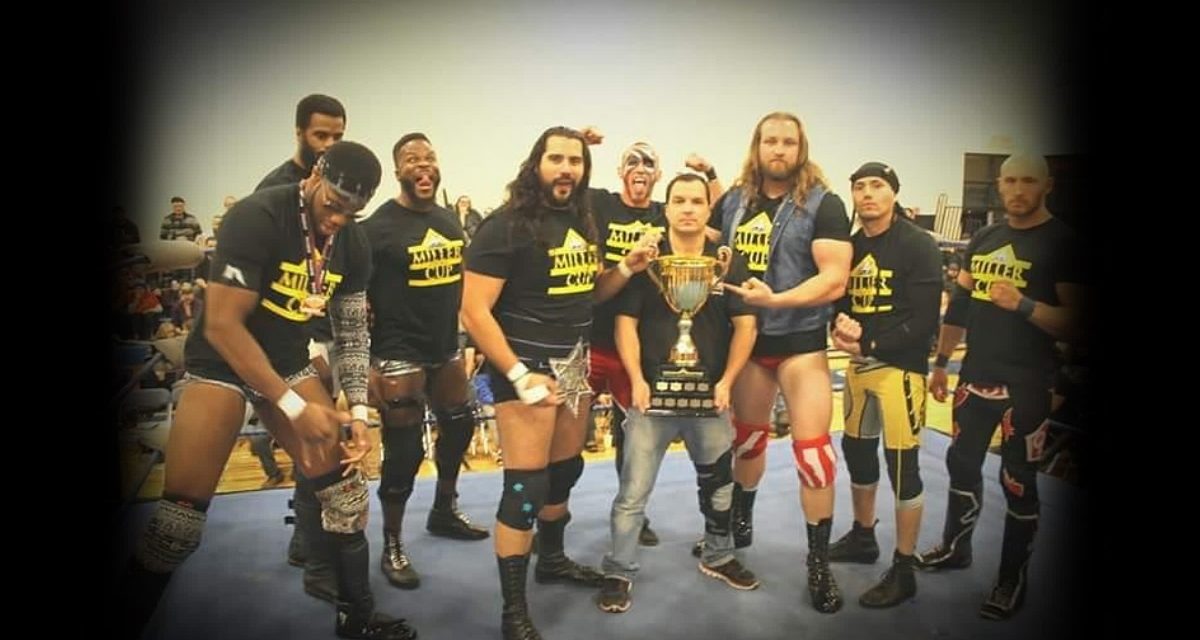 In the upper reaches of northern Ontario, North Bay has long stood out as a key hub of professional wrestling. It hosted NWA-affiliate office Northland Wrestling Enterprise for decades, played host to International Wrestling shows, and has been a very occasional tour stop for WWE.

There is a new Northland Wrestling rising, and promoter Dann Pigozzo sought permission from the son of the original Northland promoter, Larry Kasaboski, to use the name. Oddly, though, Pigozzo never thought he would be a wrestler or promoter, yet alone in North Bay. 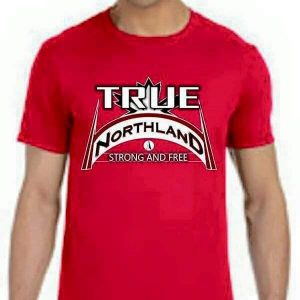 The brand holds a place in the fabric of the city’s community.

Pigozzo’s wrestling journey began on visits to his Nona’s house, many kilometres south from North Bay. Like for many Italian immigrants, “la lotta” — wrestling in Italian — provided her with a TV entertainment that, despite a language barrier, she enjoyed and watched with her grandsons.

The Rock ’n’ Wrestling craze of the 1980s ran wild over Pigozzo. He and his brother obsessed over magazines and played with the LJN and Hasbro action figures between bouts both live and televised. But one item in particular stands out as the most coveted that they both fought over.

The details about the first live event Pigozzo attended are a bit fuzzy. It was in southern Ontario, at the Memorial Gardens in Guelph, and he remembers being blown away by a Billy Red Lyons leapfrog and Andre the Giant’s mere presence. He got one of the Giant’s 8x10s. The photo emphasized Andre’s stature and it was an item he and his brother fought over ownership of.

The scale of Andre left an impression. Likewise, both Pigozzo and his Nona liked “Rowdy” Roddy Piper. “Loosely translated, my Nona would always say: ‘I want to watch the guy with the skirt,’” chuckled Pigozzo. 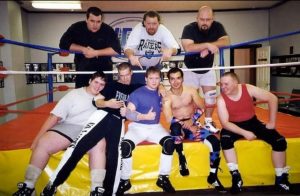 As Pigozzo matured, he maintained his wrestling fandom. Although he had been a gym goer since high school, he never could have predicted that he would become a pro wrestler due to his 5’6” stature. In 1997, when Pigozzo was 27, a friend told him about a nearby wrestling school. He visited Hart Brothers Wrestling School in Cambridge, Ontario, determined to try his hand at pursuing a backstage role and helping the promotion in whatever ways he could. He was in for a surprise. Owner Joe Frocklage (also known as Ike Shaw) expressed disbelief in Pigozzo’s desire to just work in the office, and insisted on training him. In hindsight Pigozzo believes, “He saw three grand walking in through the door.”

While excelling at working as a repo man by day, Pigozzo traveled to the gym from his Guelph home to train every night. Seven months later, he debuted as The Pitbull Kid. He didn’t like the name but Pigozzo says it was a typical one from Frocklage, who also created The Muai Thai Kid (now Tyson Dux) and The Dingo Kid among others. 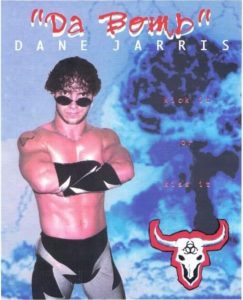 The original — and only — Dane Jarris merchandise.

Pigozzo soon left his home promotion to spread his wings on his own as Dane Jarris (later Dann Jarris). During this time the only merch he ever offered was a basic 8×10. “I never thought anyone would want a shirt of me,” he confessed. In no time, Pigozzo found himself doing what he originally intended to in wrestling — booking for local promotions such as Impact Wrestling Federation and Brand X.

In 2008, he moved to North Bay. Two years later, with his new wife pregnant he hung up the boots — though not the wrestling dreams.

Indy promotions such as BSE, Maximum Pro Wrestling and Smash Wrestling all saw North Bay as a good market. Adam “Wheels” Miller was a local key player in bringing these events to the area and Pigozzo found his way to helping with ticket sales and promotion. 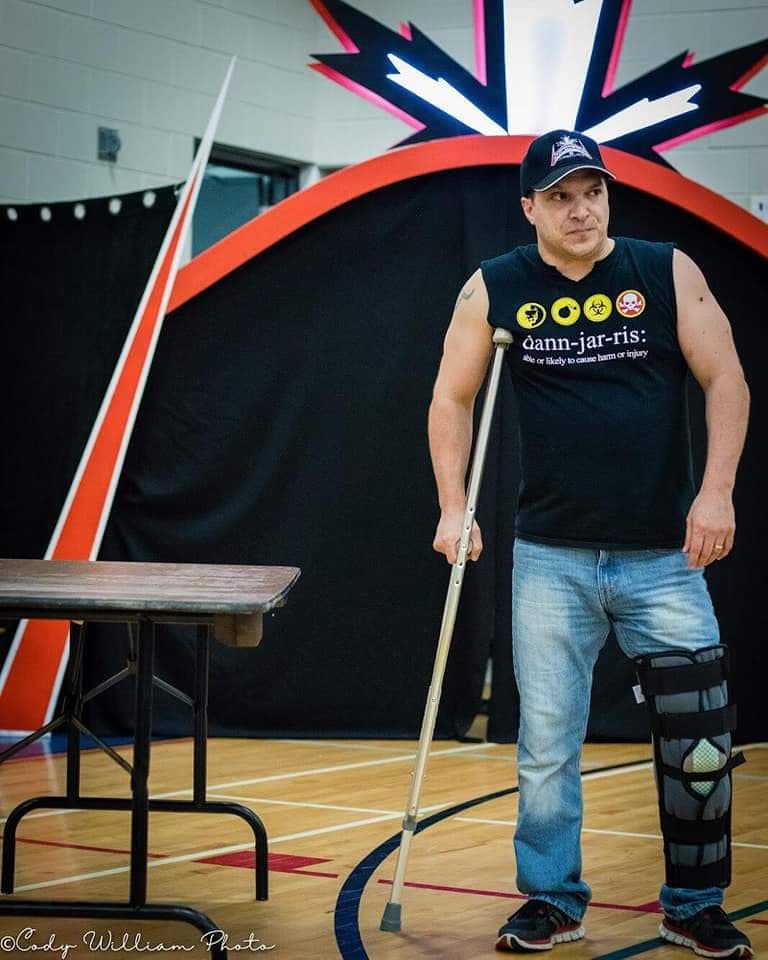 Dann Pigozzo in his first ever 2017 Dann Jarris shirt.

Pigozzo’s ability to sell hundreds of tickets led to Smash Wrestling asking him to wrestle on a subsequent event. The promotion planned to return a third time and once again work with Pigozzo. “May of that year Wheels passed away. There was an outpouring of grief from the city he left an imprint on that humbled me,” recalled Pigozzo. “I felt the right thing to do was to dedicate the October Smash show to Adam ‘Wheels’ Miller as a memorial show. Unfortunately they didn’t agree, so I decided to put on the show myself without Smash’s involvement.”

The Miller Memorial Cup didn’t turn out to be a one off. Pigozzo had the support of his community behind him and Northland Wrestling rode the wave. The first thing he needed was a ring, a supporter paid for it. Soon enough he had a local TV show, a Hall of Fame commissioner in Jimmy Garvin — who had his own ties to North Bay — and his first T-shirts. 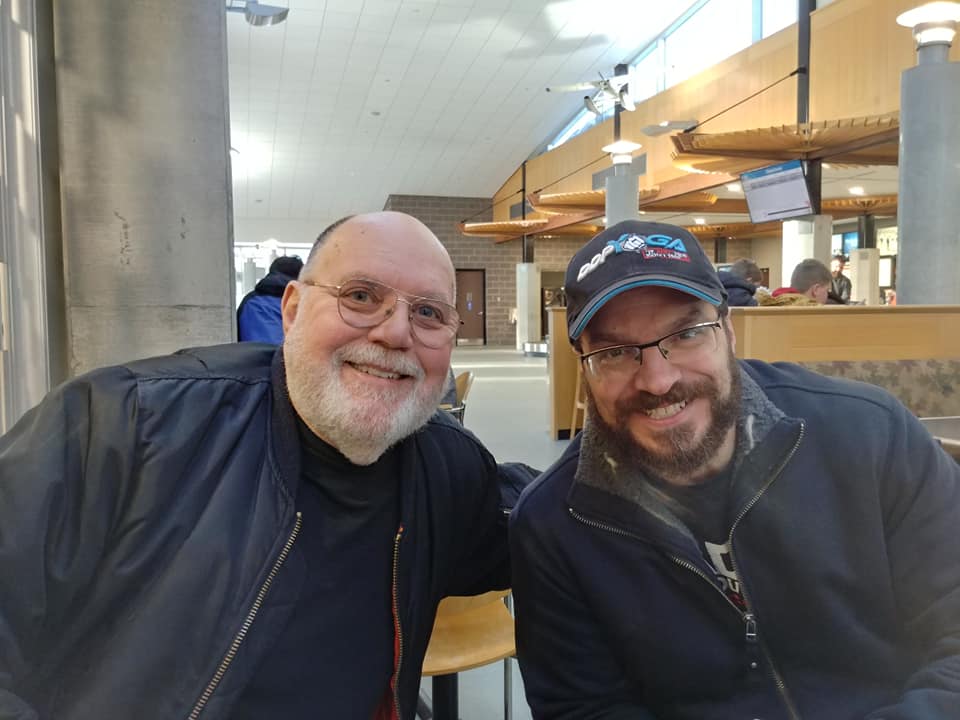 Jimmy Garvin’s wife Sunshine’s parents live in North Bay. He saw the promotion on the local TV and asked to be involved.

Now people want Northland and Pigozzo’s shirts. Like Pigozzo’s favorite shirts of the past (Hot Rod, Austin 3:16) these shirts emphasize something more than just the name of a wrestler but instead a bigger idea, community or philosophy. He does the same with his other side gig that has taken off during the pandemic with wrestling completely on hold.

In addition to being shipping Administrator for an Aviation company Pigozzo is a certified DDP Yoga instructor. He was approved in early 2020 and, although many gym classes he had lined up were cancelled due to the COVID-19 pandemic, he has been leading classes online as well as on local TV. 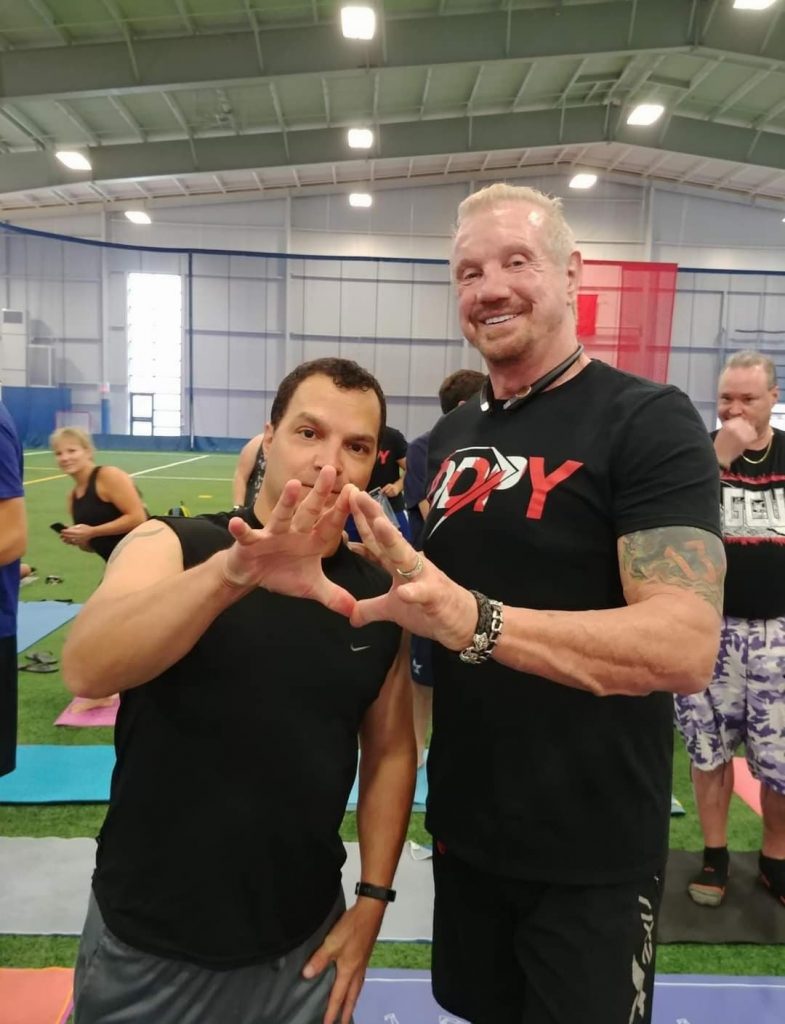 The connection to both Garvin and Diamond Dallas Page has Pigozzo musing about future events, and a latter-day Freebirds reunion between DDP, Garvin and Michael Hayes is “a possibility.”