“I’ve always wanted to be a wrestler, always,” exclaims Dane Jarris, who is also known in local indies as “Da Bomb”, during an interview at a Universal Championship Wrestling card in London, Ontario in June. “I can remember when I started (wanting to be a wrestler). Then, when a school started up in the area, I jumped at the chance to go, and I haven’t looked back.” 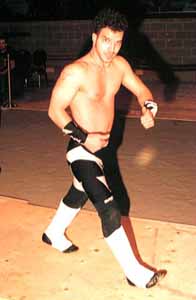 His experience with the wrestling school was obviously not a pleasant one, as Jarris declines to name them, so as not to “put them over.” However, that has not diminished the love Jarris shows for pro wrestling. His first match was against “Easy Rider” in Cambridge in September 1997. “I was doing a gimmick called the Pit Bull Kid. I lost. The guy was 300 lbs.”

Before the match, Jarris admits to being “nervous” but says that “you gotta be nervous when you’re going out there because you gotta remember all the spots and if you’re trying something new. You gotta be nervous, it keeps you on your toes. Plus, it gets my adrenaline going and I can take some of those crazy bumps I take a lot better.”

Jarris maintains that the bigger the crowd, the better the matches will be. “You get a bigger crowd, you can work easier. You get 400 people out there, you’re falling asleep. I worked in front of five people, no word of a lie. That’s tough, you’re talking to the people while you’re wrestling, having a conversation. Then you work in front of a thousand people and you just get so pumped up. I can’t imagine the feeling that guys like (Too Cold) Scorpio (who was also competing on the UCW card) have done, working in front of fifteen-thousand, twenty-thousand people, on pay-per-view, too. I couldn’t imagine that…but I’d like to experience it.”

Jarris jokingly adds that wrestling in front of a lot of people ensures that he knows “if I have my tights on right.”

Wrestling has taken Jarris from his hometown of Whistler, B.C to Toronto, Cleveland, Hickory, N.C., Ottawa, and New York. “I’ve been pretty far. I mean, I haven’t been out of the continent yet. I haven’t branched into Quebec, but I plan on getting into Quebec because they have some crazy fans out there.”

Jarris’s career has also not been without it’s highlights, including winning the Canadian Wrestling Allegiance Northern Light Heavyweight belt, a title he retained against his “erstwhile” partner, “Danger Boy” Derek Wylde, and Tyson Dux in a Triple Threat match on a CWA card in August at Medieval Times in Toronto.

When asked if a championship match is different from a regular match, Jarris replies that it is “because the people are more into it, so when you when the match, you haven’t just won a match, you’ve won a championship and if the people like you, they respond vicariously through you. They feel like they’ve won.”

“You go out there, you know you’re going to win it. The pressure’s off, you can’t lose, you can’t do anything wrong,” Jarris says in remembering his title-winning match. “I could get away with anything. It didn’t matter. I could do heel stuff, I could do face stuff and they (the crowd) didn’t care.” 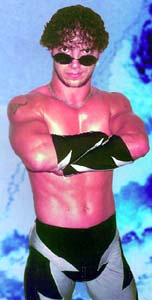 The match when he won the belt would definitely be among the highlight of Jarris’s career so far. “It was a big crowd…800-900 people and in Ontario, you’re lucky to get crowds like that. It was in front of a really rowdy crowd, and plus on that show we had Sabu. All those things combined to make that, at the time, my biggest one.”

He would also add wrestling Pete Rokk at the Toronto CHIN picnic. “That was big. There was 3,000 people there, because it was free, so they’re all going to be there. That was pretty big in terms of it was…my first exposure in Toronto, and I think I went over with some of the people because a lot of them remember me from that match. Plus I went over, so that was good.”

One of the other memorable matches for Jarris was a CWA tag team match at Medieval Times in May 1999 in which he and longtime friend Wylde found themselves on opposite sides. “It was just kind of a throw-together cruiserweight tag match.” What raised it up to becoming a great match was that “the expectations were big because the promoters were really expecting a lot because they’ve seen what I do one-on-one and then they’ve got three other guys in there, all a little bigger than me.”

“The expectations from the promoters were big and I don’t think they were disappointed at all, because it was actually a damn good match to tell you the truth. I thought it was really good.”

Jarris believes that his style of wrestling is what puts him over with the crowd. “A lot of the fans that I have are little kids who really like the Power Ranger stuff, flying and jumping and all that stuff. Those kids, they always get really excited.”

“In Toronto, especially, I come out there, and I’m automatically loved.”

In looking to the future, Jarris says “I want to be signed by one of the big two, that’s for sure. I’d like to work for the Fed (WWF) but in all likelihood, I don’t think they use the cruiserweights as much as they should. In WCW, they do and I personally think I have a very good shot at getting there based on some of the things that have happened in the last few weeks.”

Jarris, who weighs in at 168 pounds, sees the rise of the cruiserweights in WCW as a great chance for him to make his dreams come true. “The minute Rey Mysterio (Jr.) hit the scene and got popular, that’s the minute I said ‘I can do this! If that guy can do it, I can it. That guy’s smaller than me.’ This is definitely a good time for the cruiserweights.

“In my opinion, the cruiserweights definitely steal the show,” Jarris believes, adding that “these are the guys I come out to watch, because they’re crisper, they’re more exciting and the risks they take are better than some of the bigger guys. I’m not knocking the bigger guys, but it’s a different game, and I’ve always, always, always liked the smaller guys.”

Behind the Gimmick Table: Pigozzo establishing a new legacy in North Bay