Jimmy Garvin on his 23 years in wrestling

The world of pro wrestling is a wonderful dichotomy, having produced some memorable characters over the years.

Mad Dog Vachon, for example, was noted as a blood-thirsty wild man in the ring with an insatiable thirst for mayhem. Yet, in real life, he is one of wrestling’s true gentlemen away from the ring. When the TV cameras go on, most wrestlers are playing a role that is very different from their real life personas. 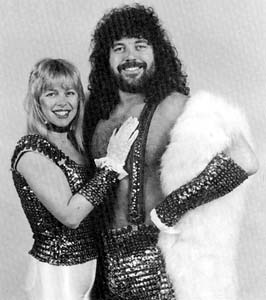 During his wrestling days, Garvin played the fun-loving, easy-going, party animal who never seemed to take life too seriously. Talking to him over the phone, one discovers that the Jimmy Garvin we saw in the ring wasn’t far removed from the real life person.

“I’m so fortunate and grateful to have experienced 23 years in this business,” Garvin told SLAM! Wrestling recently from his home in Charlotte, North Carolina.

While other wrestlers played the political games to advance their careers and worried about their spot on the roster, having fun seemed to be Garvin’s main priority.

“It was incredible fun and that was the bottom line. I had a pretty good career. I just had fun everywhere I went.”

A seasoned veteran, Garvin saw it all during his 23 years in the business before retiring in 1992. He worked for some of the biggest territories and the most powerful promoters in the business, including Jerry Jarrett in Memphis, Jim Crockett Jr. in the Carolinas, Jim Barnett in Atlanta, Nick Gulas in Nashville, Verne Gagne in Minnesota and Fritz Von Erich in Dallas.

As part of his travels, Garvin spent several years in Eddie Graham’s Florida promotion. He had three different runs in the Sunshine State and considers the time he spent there among his most memorable.

He was saddened to hear of the recent passing away of Hiro Matsuda, the long time junior heavyweight standout in the promotion and Graham’s right hand man and in-ring policeman.

“I had the utmost respect for Mr. Matsuda,” admits Garvin, who had kept in touch with him over the years. “I remember him with Duke Keomuka, Eddie Graham and Don Curtis when I was a kid. I followed his career when I was growing up. I had a lot of respect for him and was sad to hear about his death.”

Canadian fans best remember Garvin from his 1985 stint in the Montreal territory and his days in Verne Gagne’s AWA promotion which promoted in Manitoba and Northern Ontario.

“Working for Gagne was an interesting experience,” recalled Garvin. “He had a good product based on actual wrestling. He was a former college wrestler himself and he sort of expected his wrestlers to put a lot of that into their matches.”

“My last run up there was in ’85 teaming with Steven Regal as tag champs against the Road Warriors. I remember trips to Denver, San Francisco and Seattle and all over the country for Verne. Shortly after Vince McMahon came in there and pretty much put him out of business.”

During the later part of his career, he ventured from territory to territory alongside his valet and wife Patty, better known to wrestling fans as the curvaceous Precious.

“In 1985 I went to Montreal because Gagne closed down for the summer and my wife was from North Bay, Ontario originally. While I was going around Quebec working the territory, Patty and the kids got to visit Grandma. After that we were basically on the road together for five years.”

Over his career, Garvin has seen the business change right before his eyes. He was on the front lines as a foot solider for Jim Crockett when his NWA outfit was battling Vince McMahon’s WWF in an ugly promotional war. As Crockett grew greater and greater in debt, he was forced to sell his promotion off.

Garvin was wrestling for Crockett in 1988 when media mogul Ted Turner bought out the company and turned it from a regional territory into a national entity. Garvin feels Crockett could not have won the promotional war with the WWF and that it was the right move on Crockett’s part to sell the company to Turner.

“I don’t know that he could have done anything differently. I think either McMahon or Turner would have taken him over eventually. I think he hated Vince so bad, that he figured if he was going to lose out he’d rather it be to Turner.”

“Crockett did the right thing because he couldn’t have withstood the battle with the WWF. Turner was too strong and had too much money and eventually would have bought out his guys from under him.”

As Turner took over the company, Garvin saw a lot of changes in the business. With a new influx of capital in WCW, wrestlers’ salaries increased dramatically.

“There was money everywhere, said Garvin. “They had a good operation. They had the bread. They spared no expenses.”

After the buyout he was partnered with Michael Hayes and the two re-formed the Freebirds trio with Terry Gordy. Aside from their wrestling duties, Garvin and Hayes also shared commentating duties for a while with Lance Russell on WCW’s syndicated TV programs.

“We really enjoyed that and a lot of the jokes and stuff we said on the air was stuff Michael and I wrote and came up with. We still talk once a month on the phone.”

In 1989, the Freebirds reigned as world tag team champions and had one of the top spots in the promotion. Then Ric Flair took over as booker and Garvin and Hayes quickly found themselves on the outside looking in.

“Flair came in and took the book and he didn’t get along with Michael or I. We were shoved over and kept down. Michael and I were having such fun we could care less. We fought for our spot, created our own stories and we had fun.”

As house show business began to taper off in the early ’90s, WCW cut their touring schedule back dramatically while still paying exorbitant wrestler salaries. Wrestlers were making more money than ever before and were working less.

WCW was losing good money after bad for several years as executive producers such as Jim Herd and Kip Frey could not manage to bring the company into financial stability. In 1992, Bill Watts was appointed executive producer in an attempt to shake things up and stop the bleeding.

“Bill came in and he tried to run roughshod over everybody,” recalled Garvin. “By then all the guys had been spoiled to the ‘Turner way’. Bill came in and tried to turn it back to the old school and they weren’t going to have any of that and the boys eventually succeeded in getting him out of there.”

Garvin is still involved in wrestling. He’s worked a few shots for Jacques Rougeau’s International Wrestling 2000 promotion based out of Montreal and watches wrestling occasionally on TV.

Wrestling has changed a lot since Garvin left the sport.

“Wrestling today has these writers that write stuff like it’s a movie. In the old days, we did stuff off-the-cuff. We had some of our own ideas and some stuff just happened when we got out there. It wasn’t so nearly organized and programmed (as it is today).” 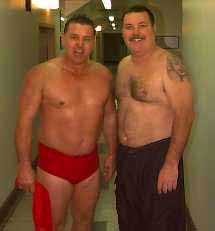 Ronnie and Jimmy Garvin in Montreal in December 1999. — Photo by Greg Oliver

“It’s entertaining but it doesn’t take any background like it used to,” commented Garvin. “I started wrestling when I was nine in a special school in Florida. I wrestled through school and turned pro when i was 17. It was hard. I started learning the ropes and how to survive for the first four or five years. Today, they see a guy in the gym that looks the part and he can be in the main event in four or five weeks.”

“I watch it today and say to myself ‘is that what it comes to?’ Wrestling’s a lost art now.”

At age 47, Garvin is enjoying life with his wife and two daughters, playing golf and flying airplanes.

“I’m a flight captain for U.S. Airways. I always flew when I wrestled. I love to play golf. I live on a golf course, I play three or four times a week and enjoy life with my kids.”

“I’m celebrating my 28th anniversary this year,” boasted Garvin. “Patty stuck with me for 23 years. Being able to survive and not lose my wife, like so many others in wrestling is a big thing. The way I look at is I had a party for 23 years and when it was done I still had my family.”