Squared Circle Cinema and Shots: The Evolution of the (Acting) Animal, Dave Bautista 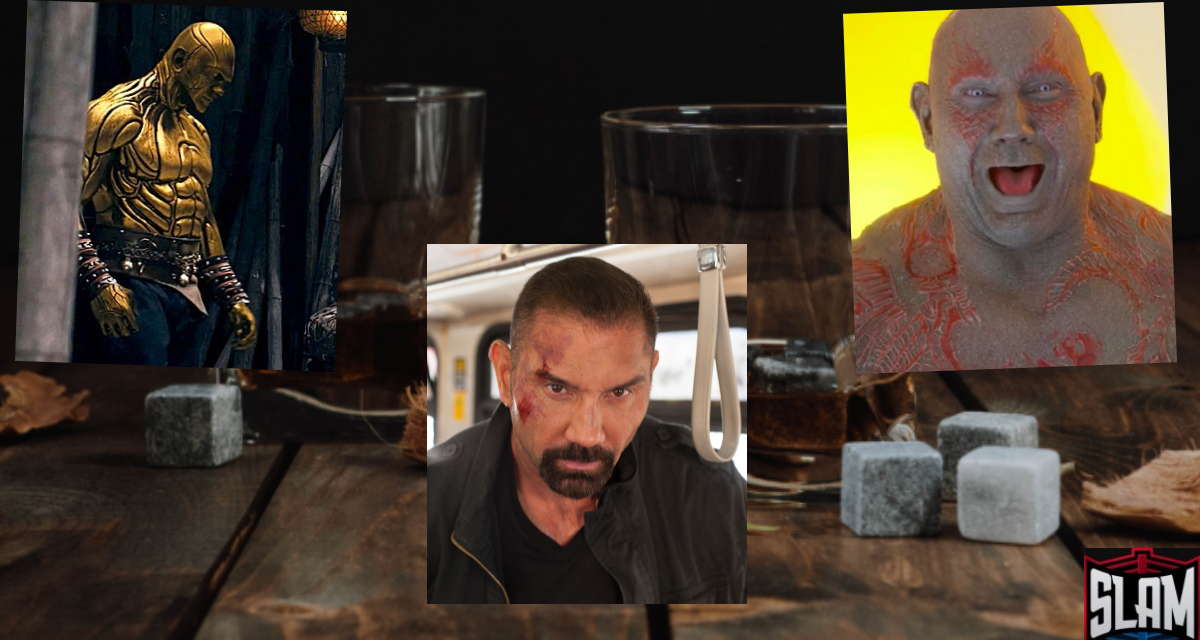 Welcome back to Slam Wrestling’s Squared Circle Cinema and Shots! This ongoing column about wrestling stars becoming movie stars will rate movies based on how much drink it takes to handle their appearances in film. Each movie will be graded on how many shots and/or accompanying drinks are needed to tolerate what your eyeballs have just been exposed to — lower scores are better!

It doesn’t matter what you drink, whether it’s an adult beverage, a juice box, or some sparkling water — just enjoy!

Continuing on with the second of a four-part series of Wrestlers-turned-Movie Stars (or as I am dubbing it “The Four Pillars of Film”), there is another name that has lately been turning heads as much as Dwayne “The Rock” Johnson. What’s unique about this individual is that, as of this writing, he has always surrounded himself with other individuals of a high caliber, whether in the squared circle or the silver screen, and he has managed to improve his skill set over the years.

That man is “The Animal,” Dave Bautista (or Batista as he was known in the WWE).

With his upcoming movie, Army of the Dead, it seemed like a good idea to review movies that Bautista has been in where he was part of a big ensemble, and see how his Evolution in acting (if you will) has increased over time since stepping into cinema.  So let’s start with his big breakthrough role in…

Written and Directed by The RZA, with a screenplay assist by Eli Roth, and presented by Quentin Tarantino. Based in the Jungle Village, where all kinds of warring clans exist, RZA’s Blacksmith character is just making his way, forging weapons and using the payments, to purchase the freedom of his lover Lady Silk and leave the village. Meanwhile, the region’s governor tasks the Lion Clan’s leader, Gold Lion, with protecting a large shipment of gold that must pass through the village. Gold Lion gets betrayed by his lieutenants, Silver Lion and Bronze Lion, who steal the gold.  Silver Lion tries to ensure that his plans come to fruition with the help of Brass Body, played by Bautista, a lethal assassin that turns his body to indestructible brass (naturally), and his vicious involvement ensures the Blacksmith becomes … The Man With The Iron Fists.

It also features Russell Crowe as the constantly besotted Jack Knife, seeking revenge, and Rick Yune (from The Fast & The Furious) is Zen-Yi, the X-Blade and the favorite son of Gold Lion seeking vengeance, and Lucy Liu is Madame Blossom, the brothel worker at The Pink Blossom with plans of her own. There are also cool cameos from 1970s actors Pam Grier and Gordon Liu, which will delight fans of Blaxploitation/Kung Fu films of the past.

Best line by Bautista in the film:

Silver Lion: Zen-Yi has become a thorn in the Lion’s paw.

Brass Body: That’s what happens when you send mice to do a man’s job.

I give this 3 shots of Five Wives Vodka and a Hong Kong Fuey for: warring clans, the Pink Blossom, a man with much Chi, a Crazy Hippo gutted, Crowe chewing the scenery like a Christmas ham, Rats (Clan) of unusual assassination, Gemini Killers and the Gemini Stance, bloody severed limbs, plantation flashbacks, “Enter the 36 Chambers” cameos, Serpent Clan sex times, creative blood spray, Enter the Dragon-style hall of mirrors, Bautista’s Tiger Style, a golden shower of doom (don’t make it weird), The Black Keys and the RZA are the baddest men alive, and you best believe it … Wu-Tang Clan ain’t nuthin’ ta f*** wit’!

This movie is a love letter to the Kung-Fu films that shaped RZA and the basis for the foundation of the Wu-Tang Clan. As for Bautista, this was during his initial hiatus from the WWE. While his acting at this time might be considered a bit stiff, his martial arts/wrestling background as well as his natural charisma ensures he is a Leviathan amongst the actors.

Bautista makes other turns with similar “tough guy” roles in other films like Riddick and the James Bond 007 film Spectre, but this next film is quite a hidden gem to check out:

Starring Jeffrey Dean Morgan (yes, folks … The Negan himself) as Luke Vaughn, he works on a riverboat casino run by Francis “The Pope” Silva, played by Robert De Niro (you may have heard of him). Vaughn’s daughter is bedridden with cancer and is in need of surgery, which he is unable to afford, and out of desperation agrees to rob Silva’s casino along with an impulsive Jason Cox (played by Bautista) who works as a pit boss at the casino. They execute their plan, but their getaway is botched and they end up hijacking Bus 657 with hostages — a move that triggers events with dire consequences.

Also starring are Gina Carano as Kris Bauhaus, a cop working a graveyard shift at the worst time, Morris Chestnut as Derrick, The Pope’s ruthless right hand man, and Mark-Paul Gosselaar (Zack Morris himself from Saved By The Bell) as lead detective Marconi trying to help with the hostage negotiations … but he has a dark secret of his own.

Cox: Remember that time you f***ed my sister?

Cox: Yeah, that’s ’cause it never happened! If you want it to happen, you’ll do me a favor.

This movie deserves 3 1/2 shots of Five Wives Vodka, and a Great Heist cocktail, for: De Niro vaping, torture tandem, Bautista plotting, Morgan begging, Morgan & De Niro having an act-off, tough guy talk, condiment planning, a Mexican Standoff on a bus, obsolescence pillow talk, Speed vibes, a beaver mascot costume switcheroo, hostage selfies, crackheads are clueless, “Drive friendly, the Texas way” signs, negotiator banter, SWAT bikers, get behind the yellow line, the “Wheels on the Bus” nursery rhyme sung as creepily as possible by Morgan, a sleight of hand you would have never expected, and the best part … a PSA at the end on how smoking kills.

At 93 minutes, this is just dumb fun, even though this plot can be best summarized as Heat mixed with Speed, with just a dash of Now You See Me. Seeing Morgan/De Niro in the same room is a treat in itself.  Bautista hold his own against these two, and really makes a case for improving his chops. This would have been filmed around the time he returned back to the WWE to (much less) fanfare.  It can be argued that his reception back to the squared circle added to his character’s development and pathos as a bad guy in this film.

But right now, get your Awesome Mix on, because it’s showtime a-holes, with…

After saving Xandar from Ronan’s wrath, the Guardians try to do good, and sometimes get into some bad (so it’s a bit of both, since they’re following the lead of Peter Quill a.k.a. Star-Lord). This time Quill, along with Drax (Bautista), Gamora (Zoe Saldana), Rocket (Bradley Cooper), and Baby Groot (Vin Diesel) come across Ego (Kurt Russel), and his assistant Mantis to show Quill his true heritage. Along the way, old foes like Yondu (Michael Rooker) and Nebula (Karen Gillan) turn to allies, and betrayal is blooming.

Best lines by Bautista in this film include his part in conversations like this:

Ego: I created what I imagined biological life to be like … down to the most minute detail.

Drax: Did you make a penis?

Gamora: What is wrong with you?

Drax: If he’s a planet, how could he make a baby with your mother? He would smush her!

Peter Quill: I don’t need to hear how my parents did it!

Drax: Why? My father would tell the story of impregnating my mother every winter solstice.

Drax: It was beautiful. You Earthers have hang-ups.

Drax: How did you get to this weird dumb planet?

Mantis: Ego found me in my larva state. Orphaned on my home world. He raised me by hand, and kept me as his own.

Drax: People usually want cute pets. Why would Ego want such a hideous one?

Mantis: I am hideous?

Drax: You are horrifying to look at. Yes. But that’s a good thing.

Drax: When you’re ugly, and someone loves you, you know they love you for who you are. Beautiful people never know who to trust.

Mantis: Well, then I’m certainly grateful to be ugly.

While the first Guardians is the one more fans enjoy of the two, with the second one suffering a sophomore slump between the themes (family issues) and hackneyed acting at times, Bautista really stands out among the cast and adds more layers to his portrayal of Drax the Destroyer. It’s his dry wit that really disarms you and leaves you shaking with laughter; almost like a Batista Bomb with jokes.

2021 appears to be the year Bautista looks to make big waves in projects like the upcoming Dune and the aforementioned Army of the Dead, but that is a column for another time. Until next month, save me a seat and a shot!