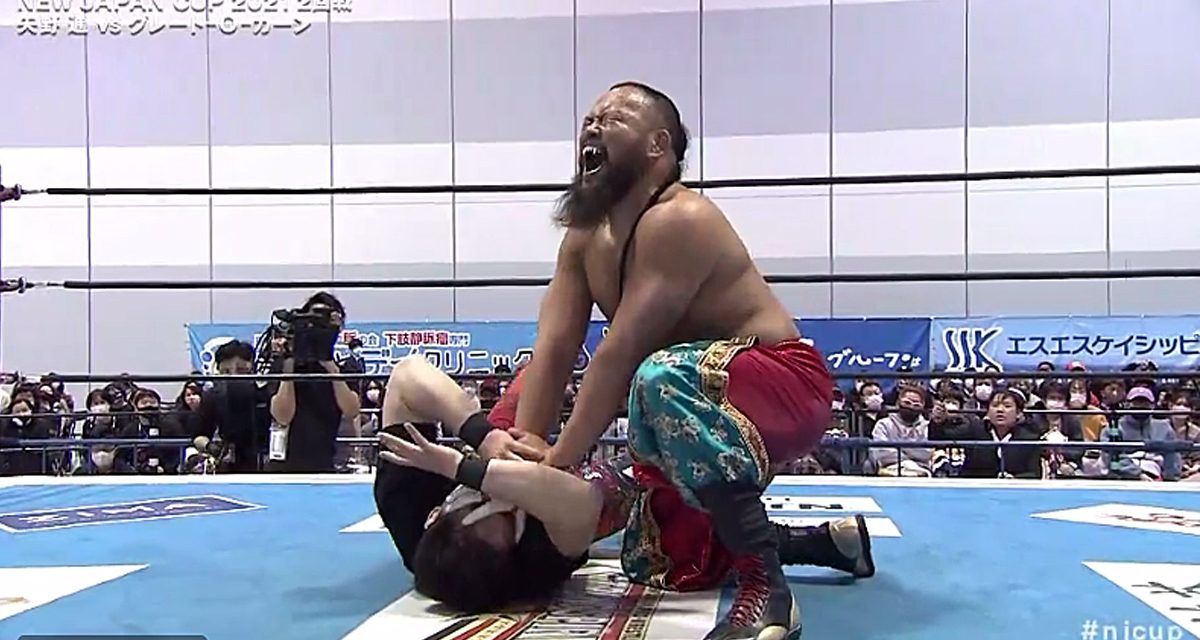 Toru Yano versus The Great-O-Khan

Yano is a bit intimidated and scared of Khan. He is tentative about even entering the ring. While Khan stands stock still in the middle of the ring Yano sprays him with some sanitizer. Yano leaves the ring to retrieve a roll of tape from under it. Khan dares Yano to tape his hands together. Now, Khan challenges Yano to remove a turnbuckle and hit him with it. Khan ducks Yano’s swing and breaks the tape. Yano runs out of the ring in terror. Khan encourages Yano to return to the ring by simply laying down. Yano stomps on Khan who quickly puts Yano in an ankle lock. Yano takes another stroll. He demands Khan fight him on the floor. Khan demands Yano fight him in the ring. Khan takes Yano’s chair, rips the ads off of it and sits down on it as he waits for Yano. Yano takes the time keeper’s chair from him and sits down in the entrance way.

The stalemate begins. The official begins his count. Khan commands a Young Lion to bring him Yano’s KOPW trophy. He threatens to destroy it unless Yano comes back to fight him. Yano pulls the ropes down on a charging Khan. He tumbles out of the ring striking the barricade.  Yano ties Khan to the barricade by his ponytail. Khan resorts to cutting some of it off with a pair of scissors so he can beat the official’s count and get back into the ring. Khan is so furious he swings at Yano and knocks down the official. Yano kicks him in the “lower abdomen” rolling him up for the win. The crowd utters a unified gasp that Yano has defeated Khan, a Cup favourite. Like a thief in the night, Yano runs to the back. For some reason, Khan takes back the hair that he left tied to the barricade before he leaves. 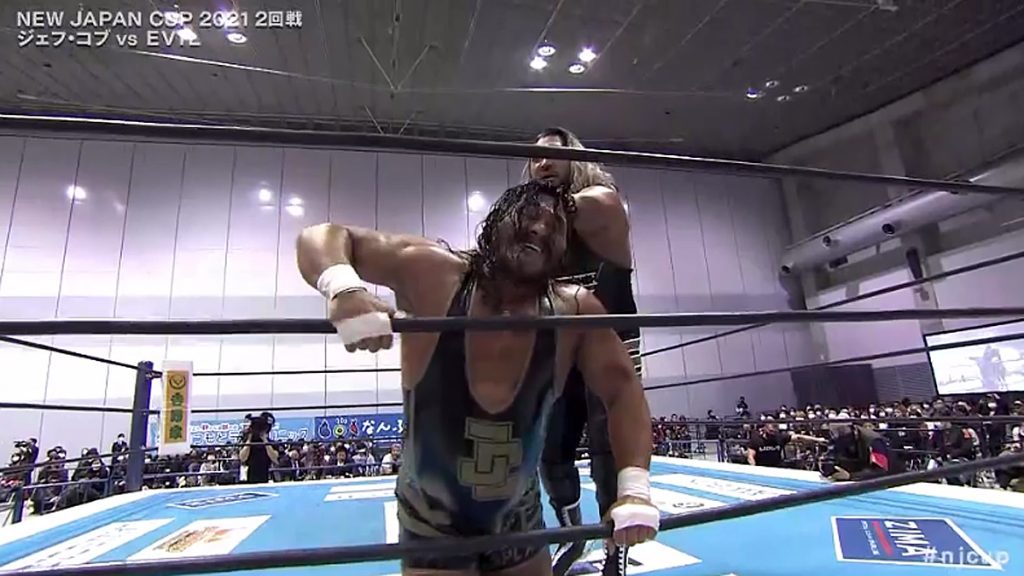 Evil works over Cobb in the ropes. Courtesy: NJPW.

Instead of starting the match, Evil plays security guard by surveying the ring, lifting up the apron to see if there is anything hiding underneath it. Dick Togo is amused by it all. Jeff Cobb is not.

Cobb whips Evil into Togo on the floor. They both hit the ringside barrier. Cobb punches both Evil and Togo in the head. Cobb also gives Yujiro Takahashi a warning not to interfere. More on that bit of advice later. Yujiro has been on commentary the entire night. After Togo trips up Cobb, Evil hurls him into the barricade and into the timekeeper’s table knocking it over once again as is the running gag with Evil these days. A solo Conchairto from Evil shakes Cobb. Togo reaches from the apron to strangle Cobb with his garotte. Cobb just elbows him in the face.

Togo tries it again but Cobb lifts him on his back and rams him into Evil who is perched in a corner. In an amazing feat of strength, Cobb double powerslams both Evil and Togo, one on each shoulder. Cobb throws Togo out of the ring and Red Shoes back in. Cobb gives Evil a sit-out powerbomb for a two count. Cobb tries to pick up Evil, however, Evil is dead weight. He is out cold…or is he? Evil is just playing possum. He clotheslines Cobb and blocks a Tour Of the Islands by slamming his back into an exposed turnbuckle. Evil charges Cobb and runs into the buckle himself when Cobb dives out of the way. Yujiro leaves his announce position sneaking over the barricade. As Cobb lifts up Evil for a Tour of the Islands, Yujiro leaps up on the apron distracting Red Shoes. Evil clocks Cobb in the “lower abdomen” and pins him with Everything is Evil.

In Round Three we now have: