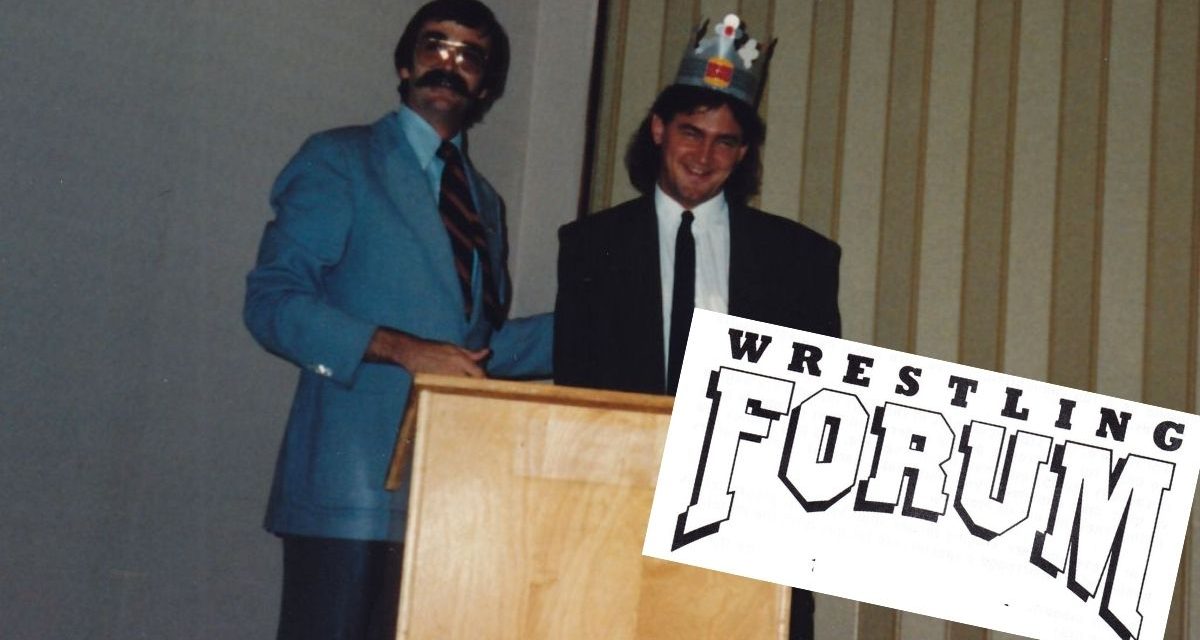 Honestly, I hadn’t thought of Jon Gallagher in a long time, so when the news came the other day that he had died, it gave me pause.

We don’t always appreciate the things that people do for us in our lives, at least not in the longer time span. This is one of those cases.

Whatever successes I have had in writing about professional wrestling, the friends and colleagues that I can count on for 32 years, began through Gallagher.

Chances are you don’t know his name, so let me bring you up to speed.

In the wrestling world, Gallagher was the publisher of the Wrestling Forum newsletter. It was delivered in the mail, so this was a long time ago. Wrestling Forum was typical of the ‘zines: single color cover, typed text inside, and folded into a booklet, covering whatever interested him and his contributors in the world of wrestling at that moment. It was $1.50 an issue, published on the 15th and 30th of each month.

He had the idea to do something different than the established Wrestling Fans International Association, and created the United Association of Wrestling Fans (UAWF). There was some beef as to why the new group sprang up, but I don’t remember the details. The UAWF application letter proclaims it’s “the ONLY fan club run FOR the Fans, by the FANS!” It was $15 for a yearly membership, which included quarterly newsletters and a birthday or Christmas card signed by a wrestler, announcer or manager. 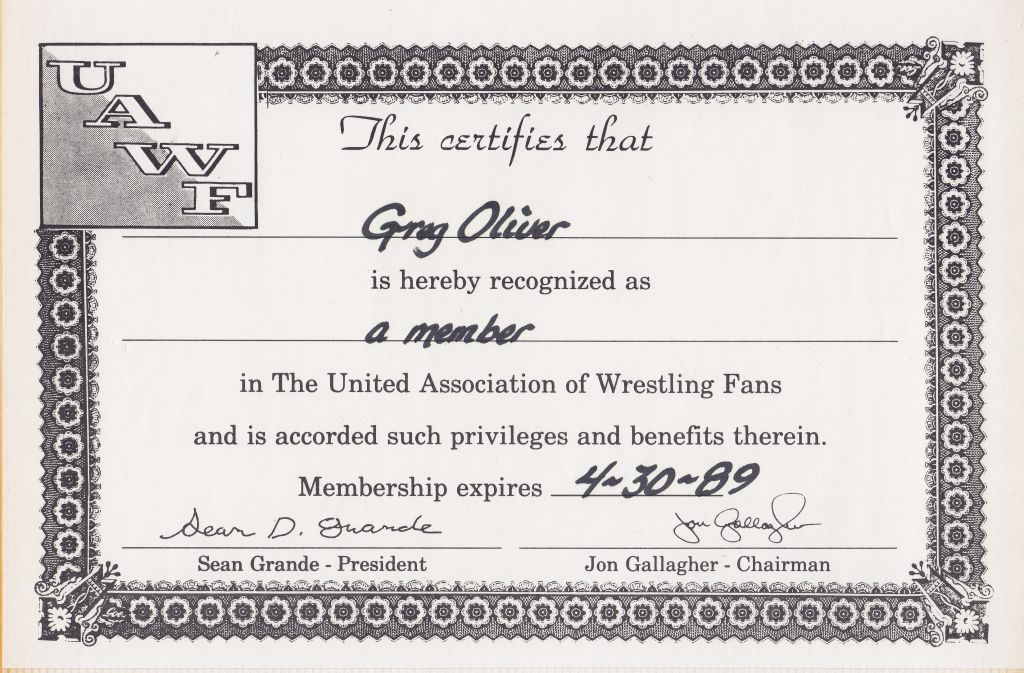 I was 17 in 1988, a couple of years into my run of publishing my own newsletter, The Canadian Wrestling Report. Gallagher and I traded newsletters, which was pretty common back then, as you often wrote plugs for each other in your publications.

So I undoubtedly learned about the UAWF convention that he had planned for October 7-10, 1988, in Memphis in his Wrestling Forum. 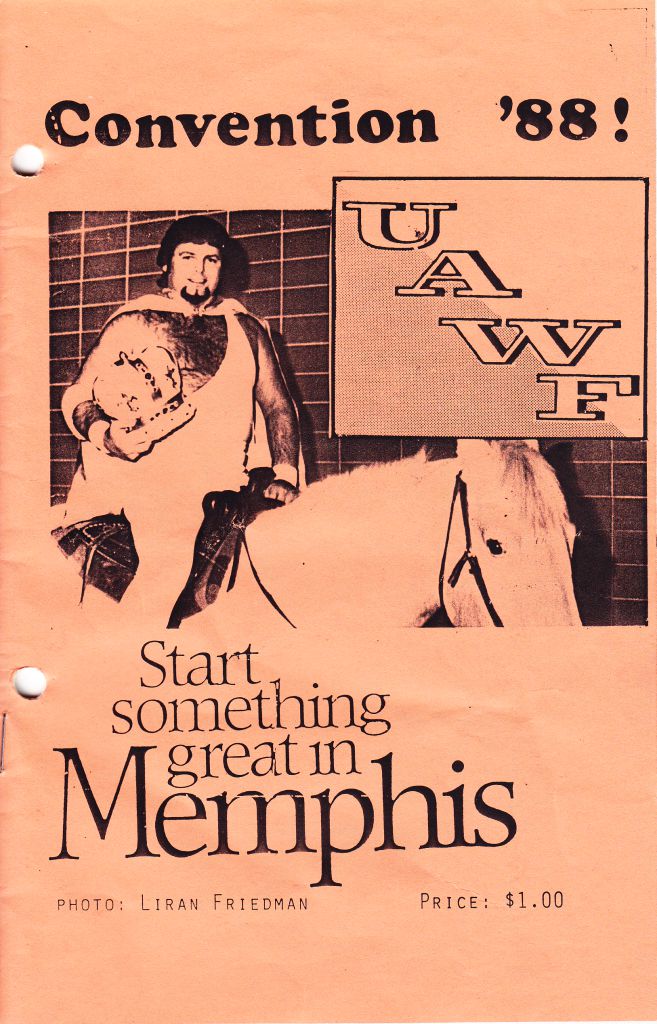 Next came the sales pitch to my parents — let me go to Memphis! It was essentially a business trip, I argued, a chance to meet others in the industry and build contacts. Honestly, I was B.S.ing, but I was so, so right. Off I went, from Kitchener to Toronto, then to Memphis. Paid my own way too, as the newsletter did okay, but more importantly, I made some money making VHS copies of pay-per-views, which was not a widely available service in Canada at that point. 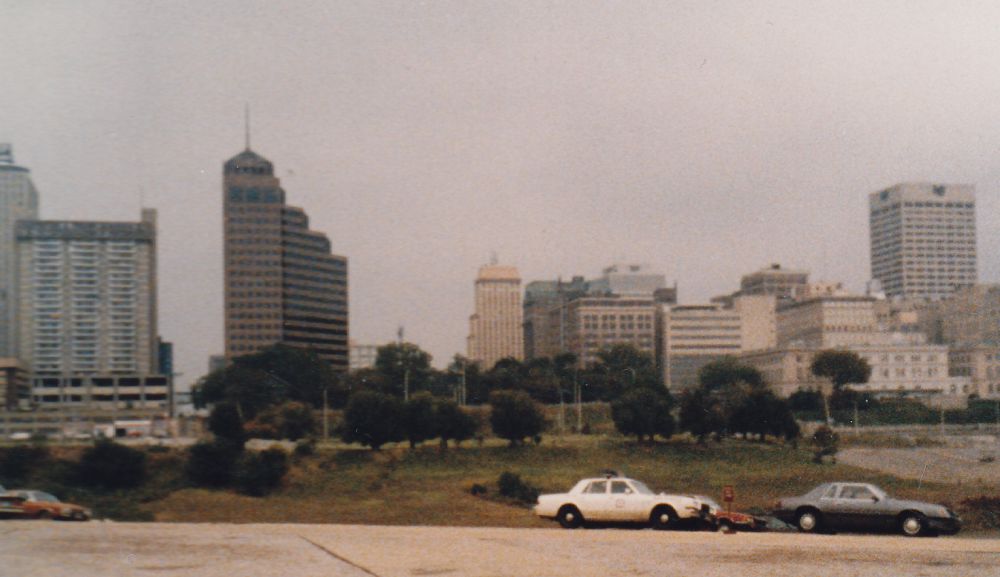 What a weekend, rolling into the week. 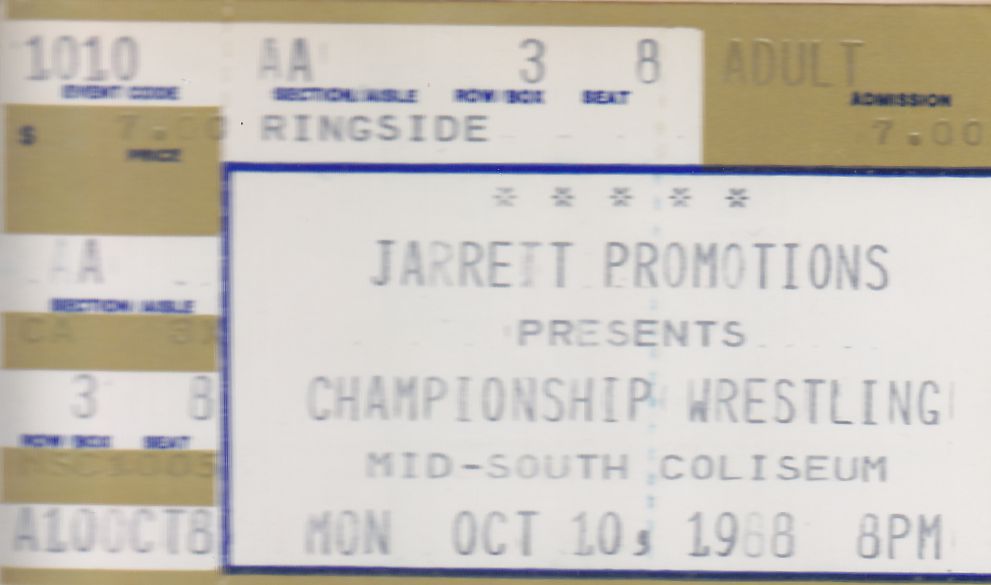 At the time, Jarrett Promotions was running the USWA, and its TV taping at WMC Channel 5 was on a Saturday morning, and the live show was at the Mid-South Coliseum on the Monday night, so the convention was booked around that. Being at a small TV studio show was so cool, and announcer Lance Russell couldn’t have been a nicer host to us. I met Kerry Von Erich and got his autograph there too. Then to get to go to the legendary Mid-South Coliseum was epic. “The Boogie Woogie Man” Jimmy Valiant was the first non-family member to say he loves me, and I have a photo to prove it! 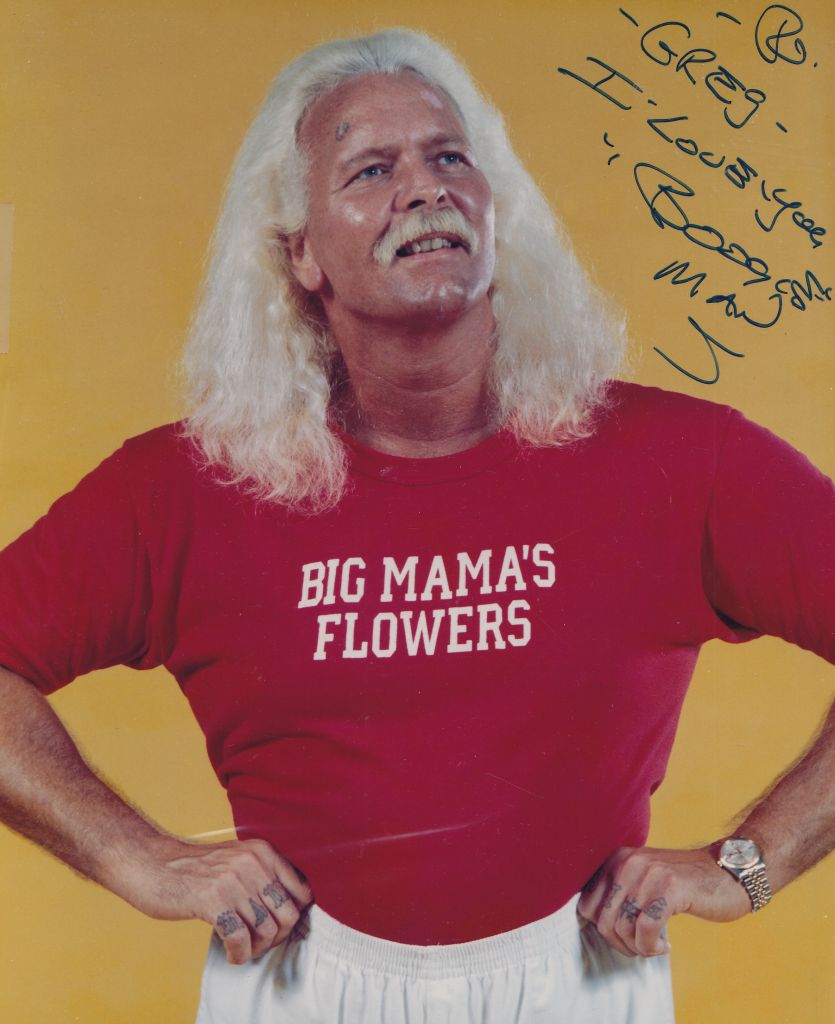 What did we do at the UAWF convention? Meet and greet, trivia, watched wrestling videos (and, if I’m remembering correctly in my teenage brain, there might have been a certain kind of video starring Misty Blue Simms later in the evening), and the banquet, where I got to meet the likes of Lou Thesz and Boyd Pierce. Gallagher was at the center of it all.

I’ll never forget going for a drive with one of my newly-made friends, JD McKay — I’d never seen anyone eat and drive like that before! (He made a later-in-life move into pro wrestling himself as The Outlaw J.D. McKay.)

The other unforgettable moment — and you have to remember that I was 17, and the drinking age was 21 — was one evening, we decided to go out and see some Memphis nightlife. The cabbie sees the five or six of us wanting to go out on the town, and made a leap of logic. He dropped us at a bar and left. The first drink wasn’t finished before we realized that he’d delivered us to a gay bar. (I’d name who was there with me, but do not remember, exactly.) 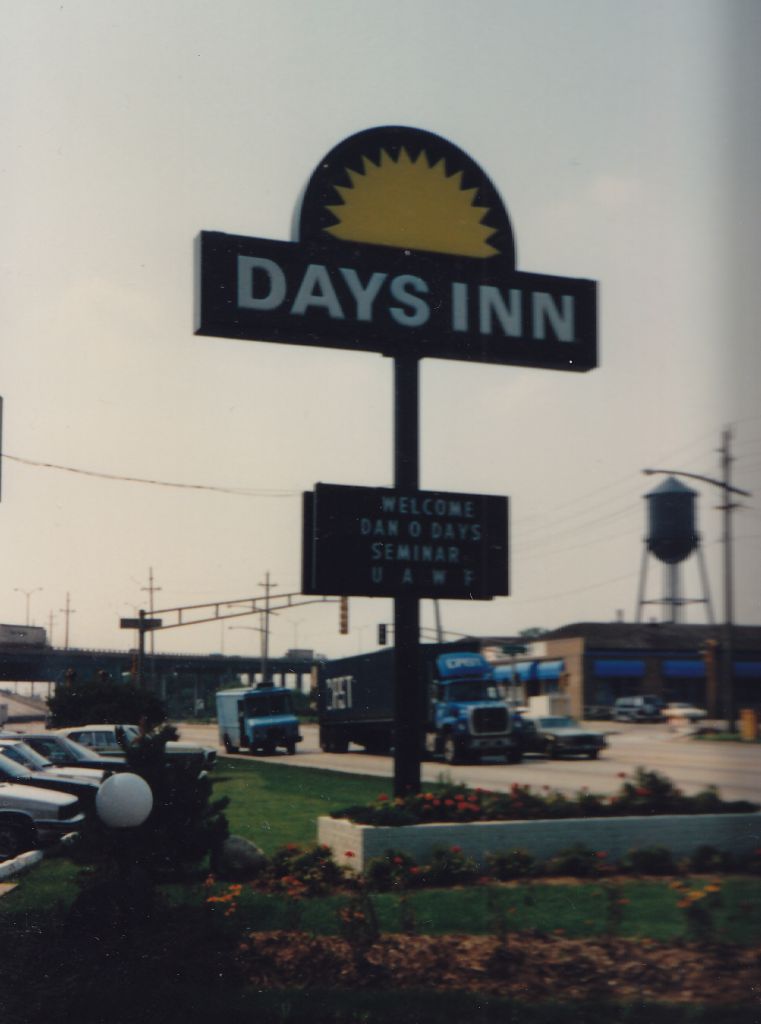 The next year, in Chicago, was even better. It was in August 1989, and a note I have from Gallagher, the UAWF chairman, and Sean Grande, its president, explained that it took six months to arrange everything, from the hotels, to the wrestlers and the promotions. 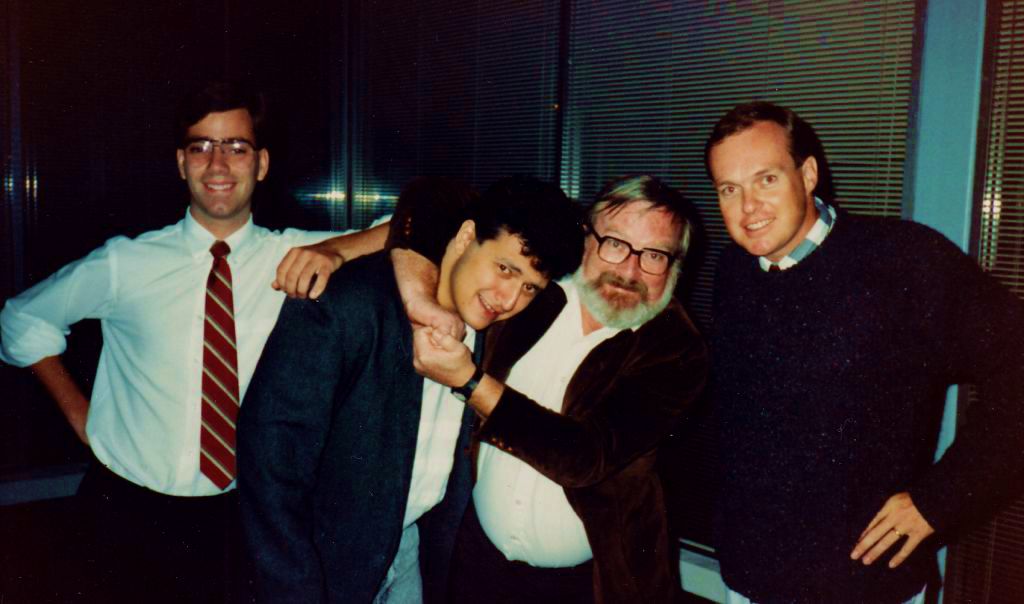 That’s me, Greg Oliver, on the left, Dr. Don Dawson headlocking Mark (last name forgotten to time), and Jim Connolly on the right.

For that one, I traveled down by train with Barrie, Ontario’s Jim Connolly, and we became great friends, and remain so. Again, there were two in-person wrestling shows — but they were both on the Saturday night, and instead of going to the American Wrestling Association (AWA) show with Larry Zbyszko vs Derrick Dukes on top, I ended up going to see a Windy City Wrestling show; it’s lost on me why I did this. There was an epic walk over a highway to get some fast food (first time I ever saw a White Castle!), cutting promos into the camera, and just the general silliness that comes from being young, having free time, and sharing a common interest. 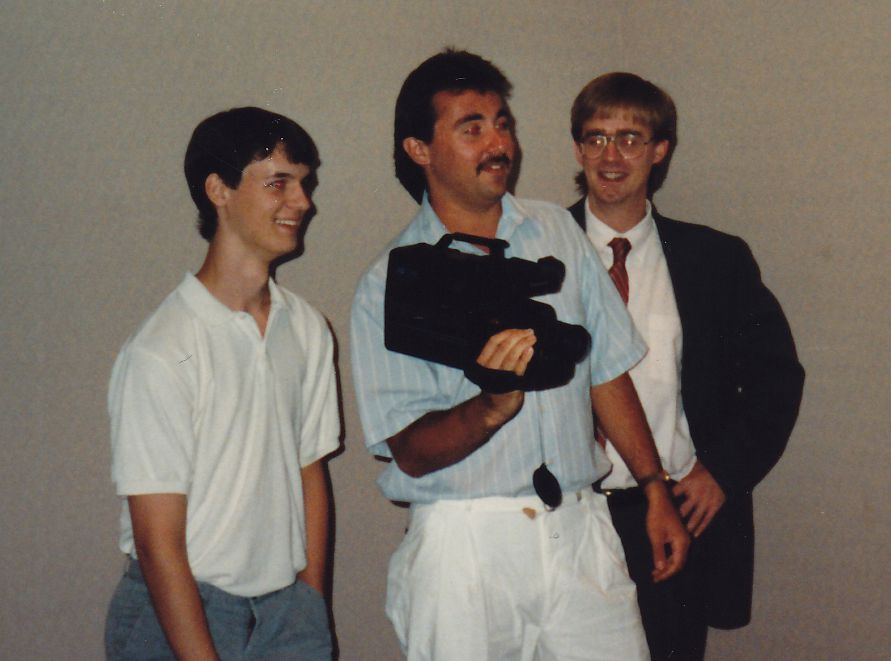 But then I stopped my newsletter, went to university, and forgot about Gallagher.

He definitely stepped away from pro wrestling, and wasn’t on the newsboards, wasn’t on the websites as they grew up popularity, and I re-entered the wrestling world running SLAM! Wrestling at Canoe and now SlamWrestling.net.

I knew he was from around Chicago — hence he was the Grand Poohbah at the UAWF event in his hometown — and I knew he was a family man. The newsletters were often a little personal, as you were sharing your opinions about wrestling, and those opinions were often shaped by the person you were and the other people in your life.

His obituary helped fill in way too many gaps in my personal knowledge of Gallagher:

Jon Gallagher, 64, of Canton, formerly of Elmwood and Knoxville, passed away at 11:10 a.m., on Saturday, April 24, 2021, at Graham Hospital in Canton.
He was born January 8, 1957, in Galesburg, to John and Aurora (Austin) Gallagher. They have preceded him in death. Jon was married to Mary Watkins and then later to Elizabeth Clarke. They both survive.
He is also survived by three daughters who were the light of his life, Kelly (Jordan) Sale, of Canton, Erin Carder of Knoxville, and Caroline Gallagher of Elmwood; one brother, Gilbert Lewis; and five grandchildren, Nicholas Watson, Kelsey Watson, Noah Carder, Andrew Sale, and Owen Sale.
He was also preceded in death by one sister, Wendy Poland; and two grandchildren, Abigail Watson and Lucas Sale.
Jon attended Carl Sandburg College and Knox College where he received his Bachelor’s degree in Secondary Education and English Literature. He was passionate about teaching English, and he was also a professional Magician. He was especially proud of his “Just Say No” show during Red Ribbon week, where he used magic to engage students in staying away from drugs. He was a member of the International Brotherhood of Magicians for over 30 years and a member of the Elmwood United Methodist Church.

That certainly describes my feelings when I look back on those two trips.

Because of Gallagher I met friends like Jammie Ward, Wade Keller, Dave Meltzer, Jeff Zinger, Scott Dickinson, Tom Burke, Ron Lemieux, John McAdam, and more. While some of them have passed, like Andy Dragos, Ron Dobratz, Dr. Don Dawson and Harry White — who had the driest wit of anyone I think I ever met — others remain, generally through Facebook.

Rest in peace, Jon. Thanks for your contributions to pro wrestling.

TOP PHOTO: Jon Gallagher and John McAdam (“The King”?) at the 1989 UAWF convention in Chicago. Photo by Greg Oliver 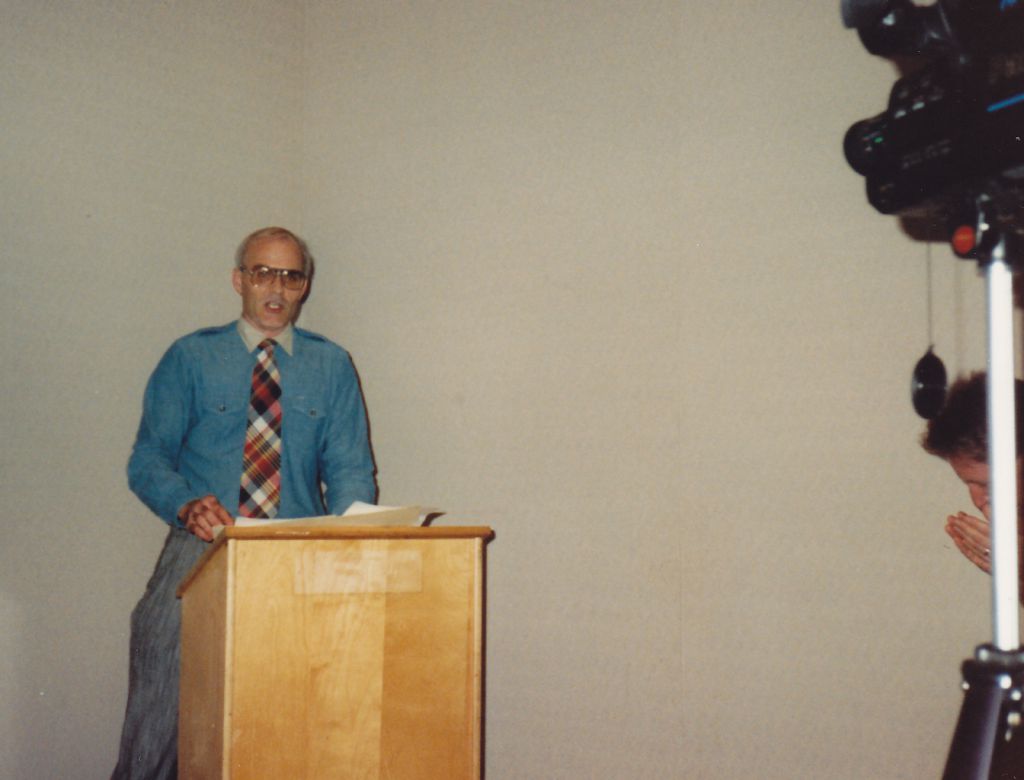 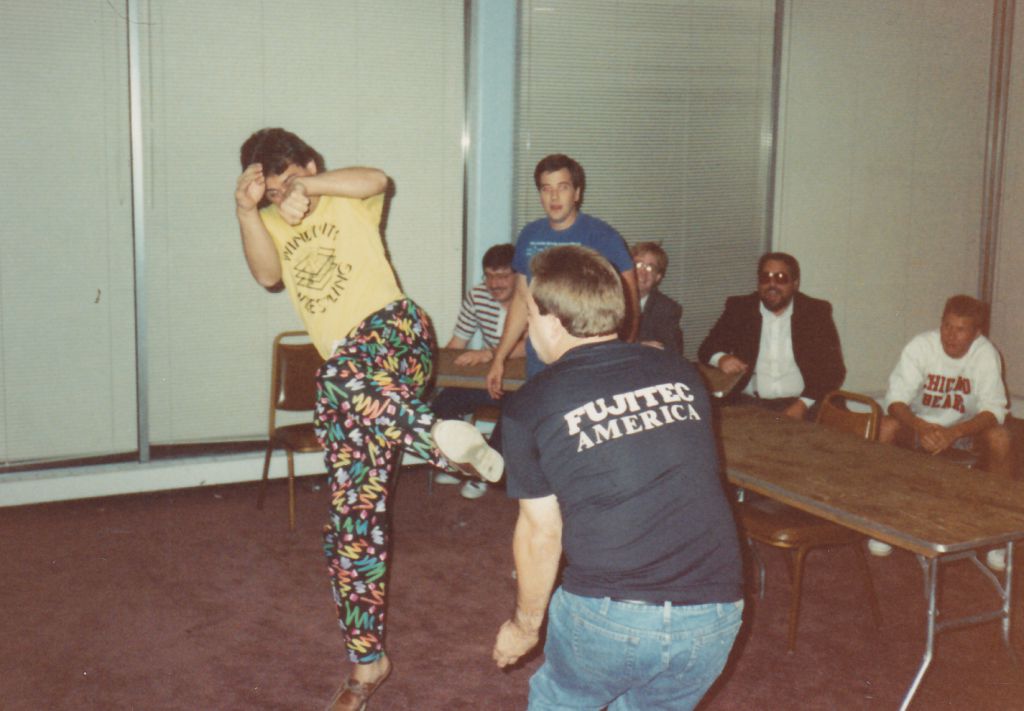 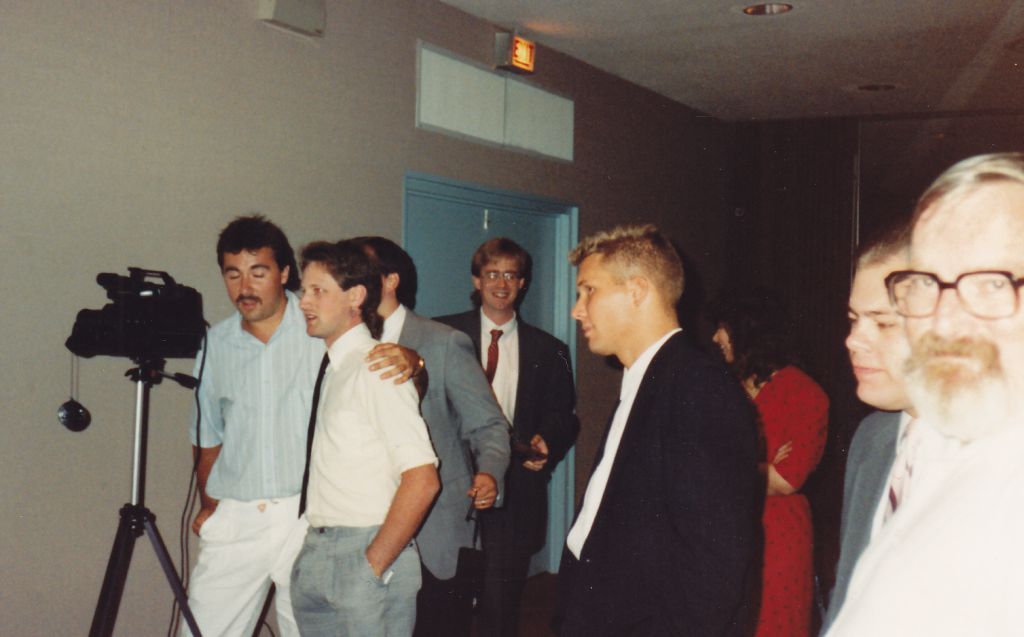 I’ll correct if anyone can help, but I think it’s Jammie Ward and Lance Levine at the camera, Steve Sims in the glasses at the back, unknown with the brush cut, then Scott Dickinson and Dr. Don Dawson. 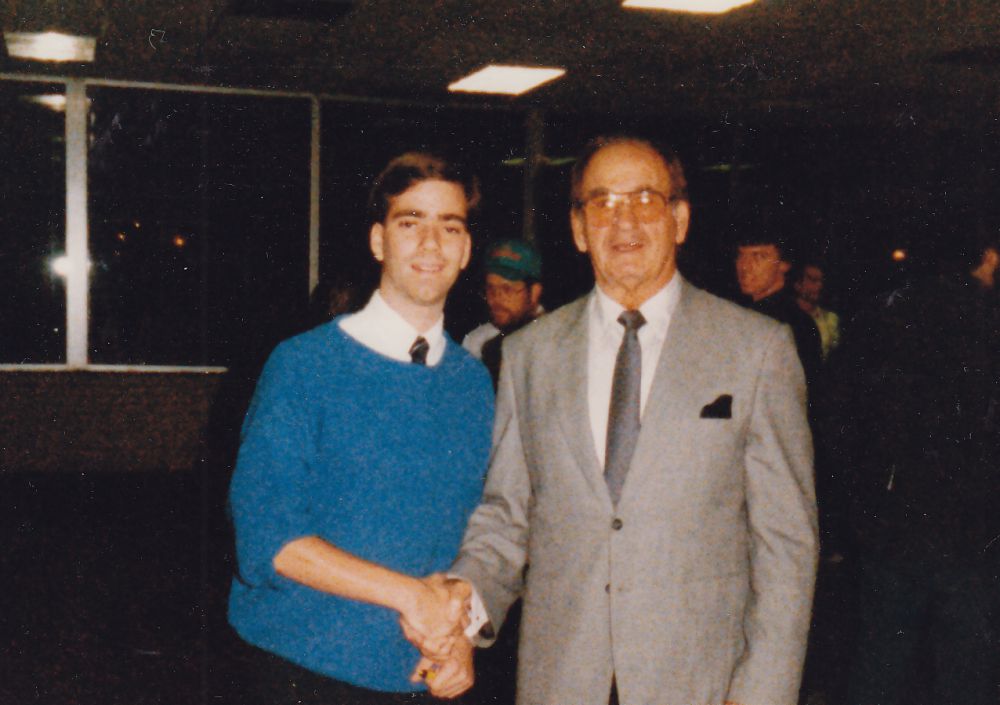 Greg Oliver and Lou Thesz in Memphis in 1988. 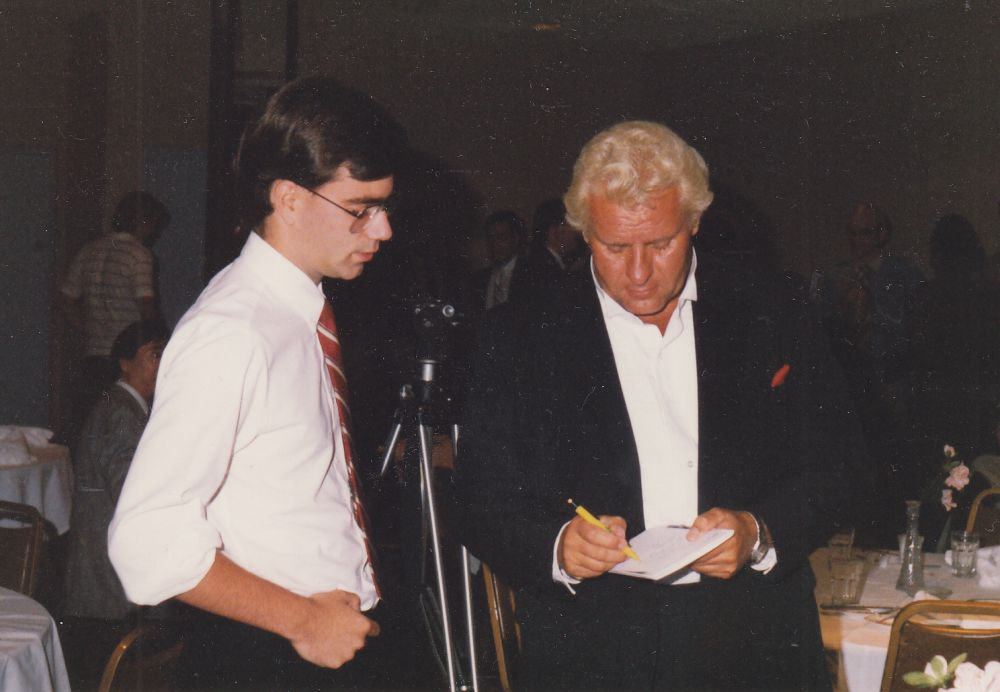 Greg Oliver and Johnny Valiant in Chicago in 1989. 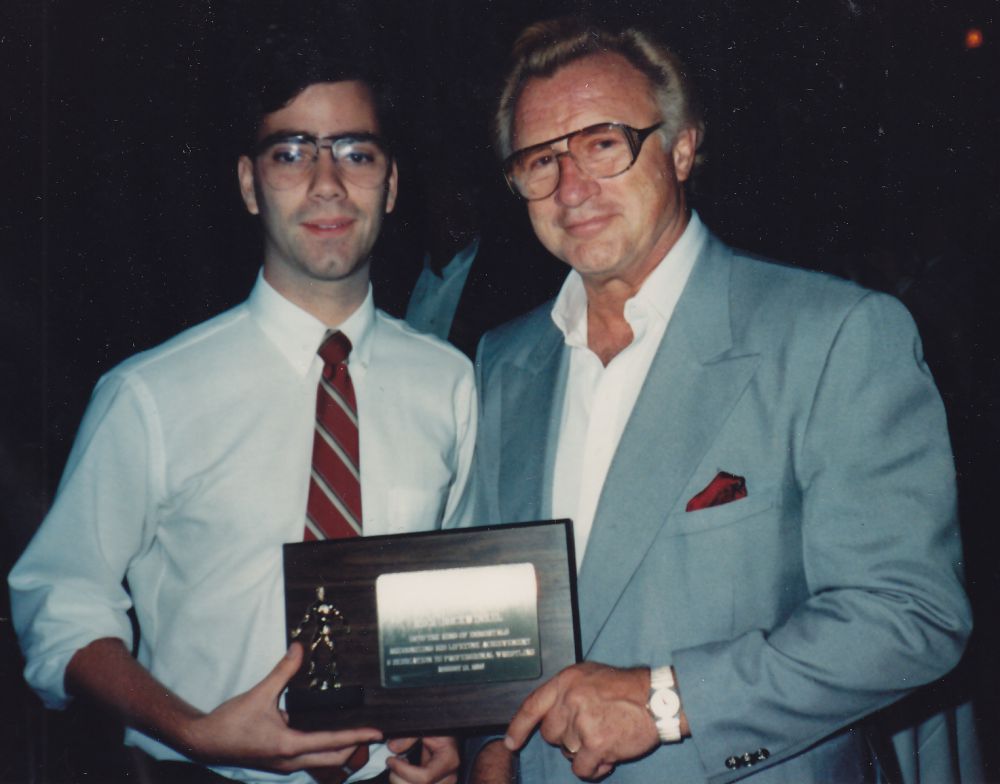 Greg Oliver and Nick Bockwinkel in Chicago in 1989. 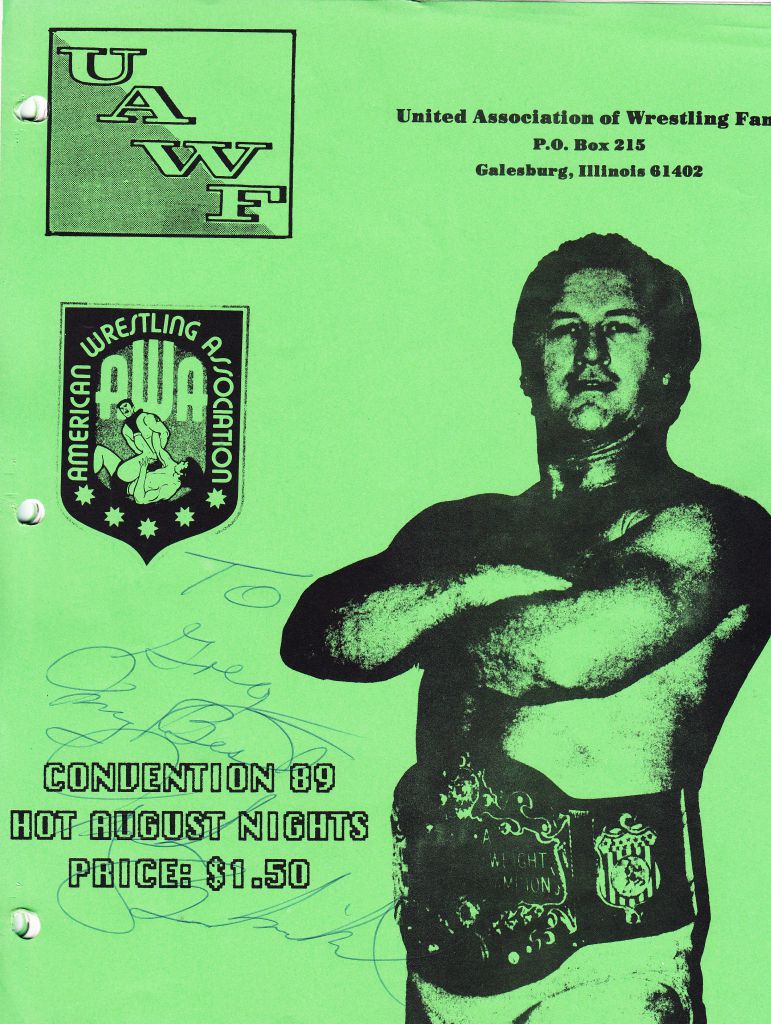