WCW ref Dickinson on the outs 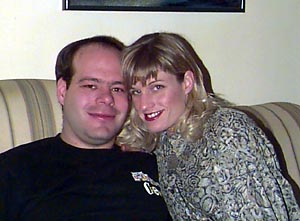 Scott Dickinson and his wife Jennifer.

Lost in the cost-cutting measures of the money-pit that is World Championship Wrestling are the little guys. Fans hear about the big money contracts that the top stars are getting. Almost the entire ‘Millionaire’s Club’ is sitting at home at the moment, collecting a paycheque.

Then there is WCW referee Scott Dickinson, who has worked for the company just once over the past 10 months. After three years working on a part-time basis for the company, he was the early victim of corporate downsizing, which to his surprise started at the bottom rather than at the top of the salary chain.

“I kind of saw it coming when [WCW honcho Bill] Busch came in and they started talking about cutting,” Dickinson told SLAM! Wrestling.

Luckily, Dickinson never quit his real job working for the U.S. Post Office in the Boston-area. In fact, many within WCW like Kevin Sullivan and Terry Taylor were supportive of his first job, and urged him to keep it because of the up-and-down nature of pro wrestling.

It was a tough call for Dickinson, 33, who had always dreamed of working in pro wrestling, and started as a 21-year-old referee on independents around Boston. “In my heart I wanted to [work full-time], but in my head I knew, ‘here today, gone tomorrow,’ and I had a pretty good job.”

Dickinson was a big fan of wrestling growing up and started attending many Boston-area independents. The late promoter Tony Rumble suggested that he become a referee, scaling down his dream of being a wrestler. “I didn’t really have the size — at least the right proportions anyway,” Dickinson can say now.

He paid his dues, working wherever and whenever he could. Rumble brought in Kevin Sullivan to work the area and Dickinson got to know the ‘Taskmaster’. When Sullivan had moved up in WCW and Nitro was expanded to three hours, Dickinson saw his opportunity.

“I called at the right time and he told me to come down. I mainly worked Monday nights at pay-per-views, occasionally I’d do other stuff,” Dickinson said. Paid on a per-night basis, his longest trip was 12 days in a row for WCW.

Hitting the road was rewarding in a whole other way for Dickinson. He had made many friends over the years in pro wrestling, and in more than a few stops he had a place to stay for free and a ride to and from the airport. “You basically pay for everything on your own on the road,” he explained, adding that the cost-saving measure ended up being great fun as well.

Dickinson admitted to being a little bit nervous on his TV debut, but said that he quickly got used to the crowd. It was the IFB ear-piece, which is runs from a box in the pocket, up the shirt and into the ear, that the referees wear for TV that was a little bit hard to get used to.

“The first few weeks, I had a defective one,” Dickinson said. “So I couldn’t hear the guy very good to give me the signals. So it was pretty tough at first. Once I realized it was the piece and not me.”

It could be any number of people in the arena feeding him time and information through the ear-piece. “Usually they just tell you to send them home, so it wasn’t too bad. Sometimes so guys want, Dallas Page is famous for wanting a minute to minute countdown and stuff, even if it’s just during the middle of the show. Just for his own, ’cause he plans everything out anyway. Except for the end of the show, it’s generally not that important.”

Other wrestlers can be difficult too. “The guys sometimes do their own thing and don’t listen to you, so they’ll yell at you to tell them to get out of there.” The well-known WCW primadonnas like Buff Bagwell, Lex Luger and Scott Steiner were tough on the referees. “Those guys are hard to deal with,” Dickinson said.

Away from the ring, he is good friends with Hugh Morrus, Charles Robinson, Chris Benoit, Dean Malenko, and Chris Jericho.

For Dickinson, the career highlight was refereeing Ric Flair vs Bret Hart in Boston at a house show. But the most memorable match for him had the unexpected. “Alex Wright and Jim Duggan almost had a little bit of a shoot when I was reffing a pay-per-view. It was very brief,” he said. The two became very “uncooperative” in the ring. “Alex was trying to be a wrestler for a minute, basically. I don’t know why.”

The referees in WCW were a varied bunch, but were happy to have him arrive when he did because they were overworked at the TV tapings. Dickinson roomed with Brian Hildebrand most of the time.

“Mickey Jay thinks of himself as the head ref. It’s kind of a joke because Nick [Patrick]’s been there 10 or 11 years. They let him write up the ref order up,” he said. Charles Robinson is a true Ric Flair mark “to the 10th degree.” And referee Billy Silverman, Dickinson said he “couldn’t trust as far as I could throw him.”

He still does independent around the Northeast, but is recognized less and less for his time on WCW TV as time goes by. Dickinson’s wife, Jennifer, has been great. “My wife is probably the most supportive person around, even today,” he said. Even his parents gave him all the support they could over the years, but with his father being a postal worker too, Dickinson knew that wrestling over the Post Office wasn’t going to fly as a full-time career decision.