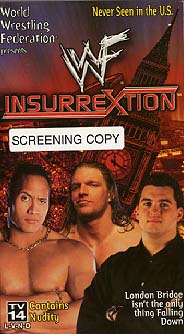 There is a reason why the WWF’s track record in Britain is next to perfect. Whenever they go there the talent seems to give it all they’ve got. This particular stop – the Insurrextion pay-per-view from London, England, earlier this year drew a lot of controversy due to The Kat once again revealing private parts of her anatomy to the viewing public. To set the record straight, the flash is so quick that if you blink, you’ll miss it altogether. It hardly warrants the TV 14 rating given to the tape and the “Contains Nudity” warning label. Unless you own a NASA commissioned VCR bearing stellar PAUSE and SHUTTLE capabilities, you’re plain out of luck.

The card itself doesn’t look spectacular though appearances can be deceiving. Everyone from the mid-carders to the top names in the WWF expend a tanker truck full of elbow grease turning commonplace matches into novel contests. I know that it’s hard to believe but even the Kane against Bull Buchanan and the Road Dogg versus Bradshaw bouts are tolerable. The standard “special guest appearance” by the British Bulldog in his homeland, Big Show shaking his gargantuan-sized butt as “Showkishi” and Buh Buh Ray Dudley busting a few moves in the middle of the ring also add some merriment to the goings on.

The crowning touches are a rare and exceptional Kurt Angle – Chris Benoit match and a high-flying clash between Chris Jericho and Eddie Guerrero for the European strap. These two bouts more than make up for a hideous three way, Shane McMahon-Triple H-The Rock main event that is so dull you’ll be begging for a run-in just to end the misery. Other than that, Insurrextion is a grand distraction during those lazy, crazy days of summer.