Tom Burke at 62 years of collecting — and counting

Vince McMahon revolutionized pro wrestling in many ways. Today it is taken for granted how easy it is to procure any conceivable sort of merchandise officially licensed to a “Superstar.” Such items are only a few strokes away on your smartphone; years ago, it was just a few clicks on your computer. You can go into a big box store as you could for years before the popularization of the internet for merch. Before that you could order through magazines and of course, then, now and forever you could get it in the arena itself. But before “Sports Entertainment” “Hulkamania” and “Rock ’n’ Wrestling,” pro wrestling was consumed in a very different manner. 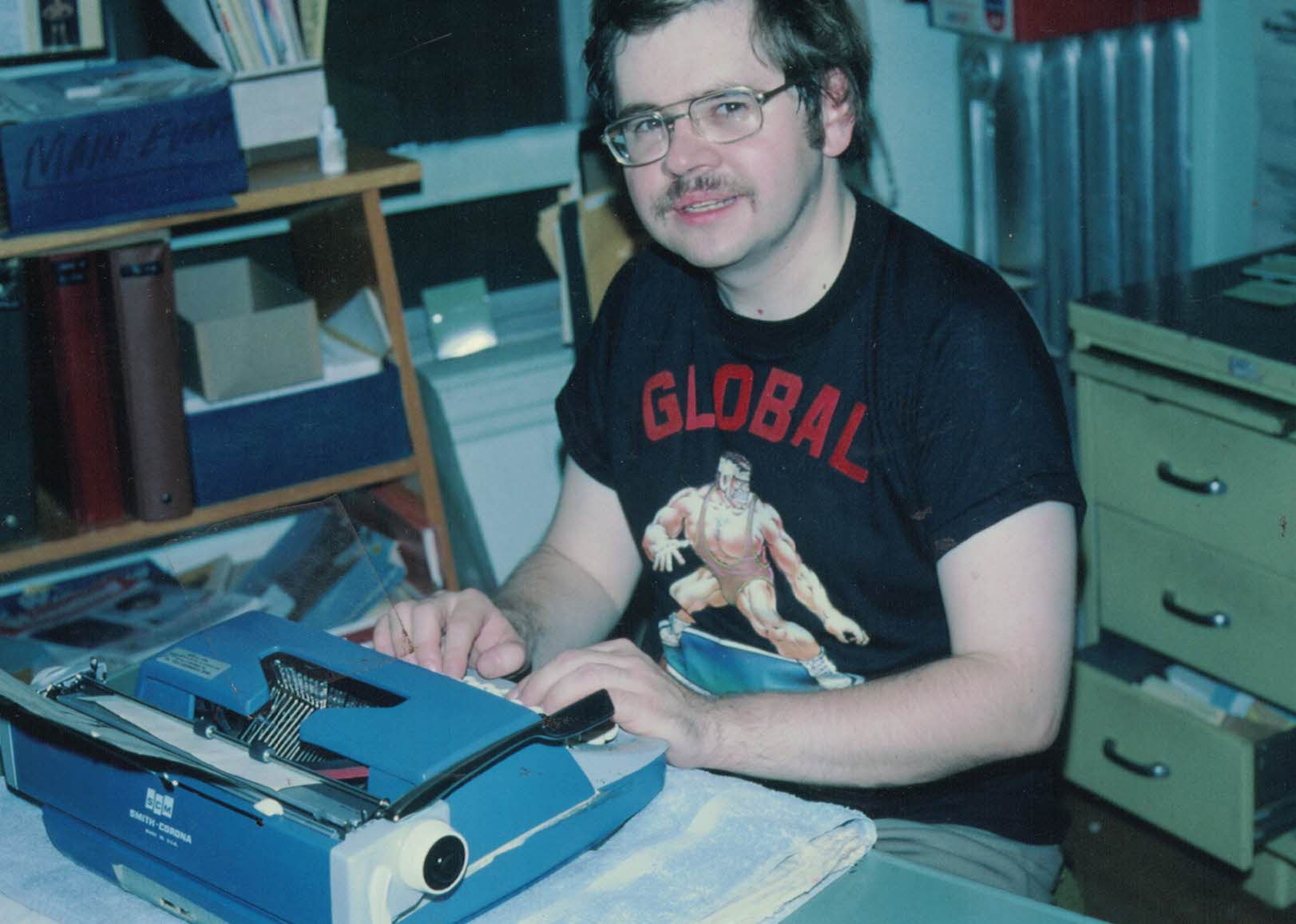 Tom Burke is a professional wrestling historian who has been recognized by the Cauliflower Alley Club for his achievements and is one of the most prolific collectors of pre-1984 wrestling memorabilia. Specifically 1984, as on January 23, 1984, Hulk Hogan became the first wrestler to escape WWF World Champion Iron Sheik’s Camel Clutch and used his Atomic Leg Drop to usher in the era of “Hulkamania.” It was a turning point in the business.

Born in 1946 and still living in Springfield, Massachusetts, Tom has been following  pro wrestling for 62 years.

He primarily collects ephemeral items because before 1984 “there wasn’t much of a choice for wrestling fans aside from 8×10 photos.” Tickets to see the action live in the arena is what was being sold prior to 1984, and anything else was mostly an incidental bonus. Without building to a pay per view, or cable TV ratings to be concerned with, wrestling was a glorified commercial for live events where the true epic Shakesperian matches of consequence would occur.

The oldest items in Tom’s collection date back to the turn of the 20th century — a Boston flyer from 1909 and cutouts from Police Gazette magazine.

Although not ephemeral, some collectibles which were intended to be useful at the time lost relevance through changes in technology. He shared an example: “This of course is something which younger fans may not understand, ink blotters. I have a couple that were put out by Paul Bowser’s promotion featuring champion Steve ‘Crusher’ Casey and Frank Sexton. They have his picture in the centre and the history of the championship. Then of course on the back is the felt for the ink.”

Existing somewhere between trading cards and 8x10s are the 1930s to ’50s phenomenon of Exhibit/Arcade Cards. Tom’s collection includes Stanislaus Zbyszko and Ed “Strangler” Lewis cards. He recounts that amusement parks in the late 1940s and early ’50s featured vending machines where exhibit cards could be purchased which featured baseball and football players, movie stars and wrestlers for five cents. Paul Bowser’s promotion also put out a whole set that was advertised in various wrestling magazines. 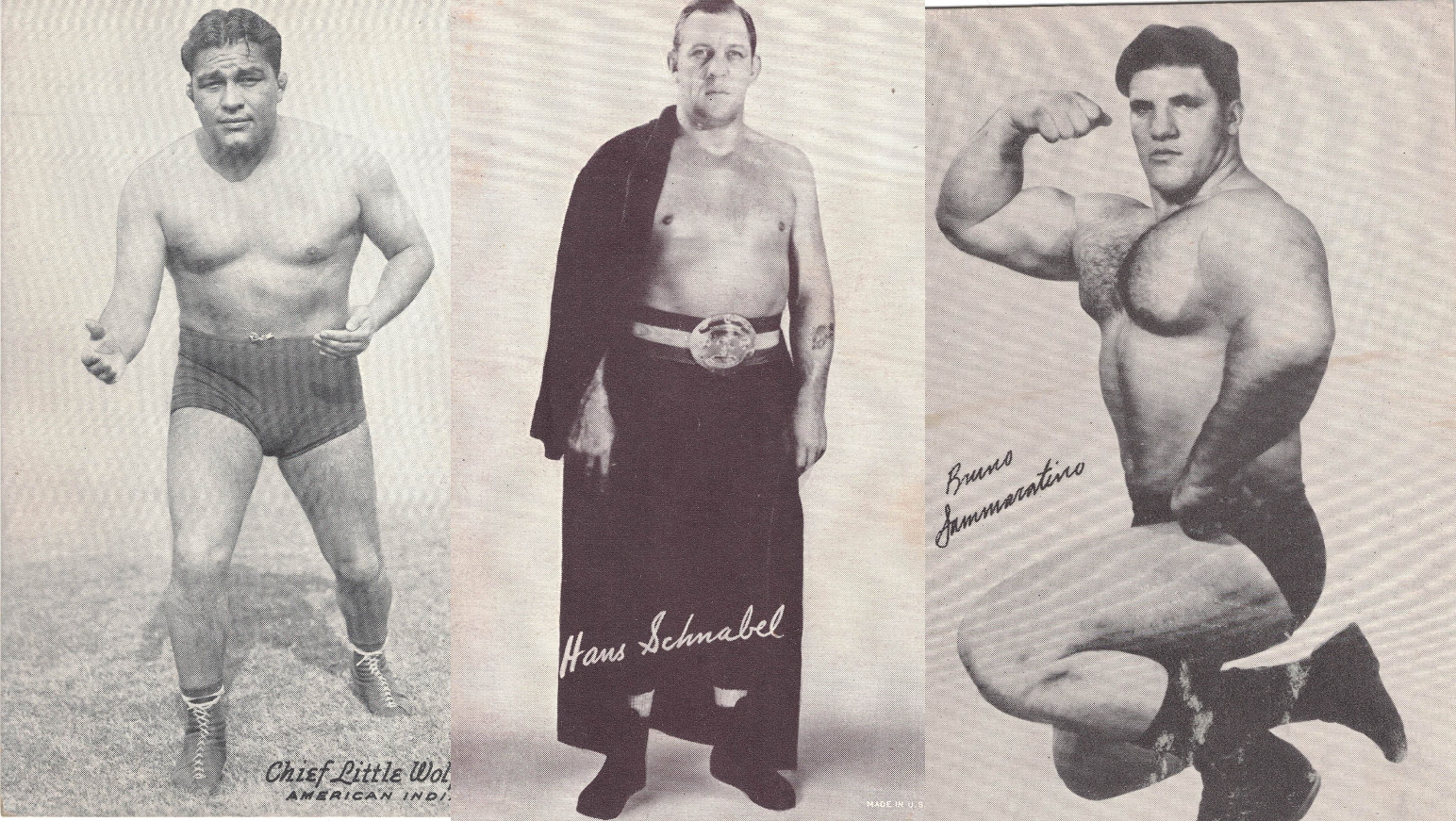 The once integral magazine market has become a niche with the prevalence of digital media. Magazines were not only a place for promotions to showcase their star talent and angles but for community and, of course, merch sales. Magazines provided a place for serious fans to connect like the internet does today. “Wrestling fans in that era, unless you were a die-hard fan like I was, wouldn’t know what was going on outside their geographic area. Newsletters and Pen Pals were a way to find out what was going on.”

For wrestling collectors, non-wrestling magazines also provided opportunities for wrestling information and collecting, numerous magazines featured wrestling and wrestlers. Tom has several such magazines in his collection.  “There was a magazine in the 50s called Cornette, not to be confused with Jimmy. It was like Reader’s Digest and they occasionally ran articles on wrestling.”

The national publication TV Guide once ran a four-page article in the 1960s featuring a picture of The Sheik with his slave girl and an incense burner. African-American culture magazine Ebony ran a famous story when Bearcat Wright demanded to wrestle white wrestlers during segregation. Likewise, Dick the Bruiser appeared in The National Tattler, a tabloid publication similar to the National Enquirer.

Much like comic books of the time, magazines featured advertisements to mail-order items. “Some wrestlers were very self promoting. The Destroyer Dick Beyer, he wore a mask, of course, but he also sold his masks through the post office box in a magazine ad. He also sold, and I wish I had one, a golf ball with his image on it. I should have jumped on it once when I had the chance.” 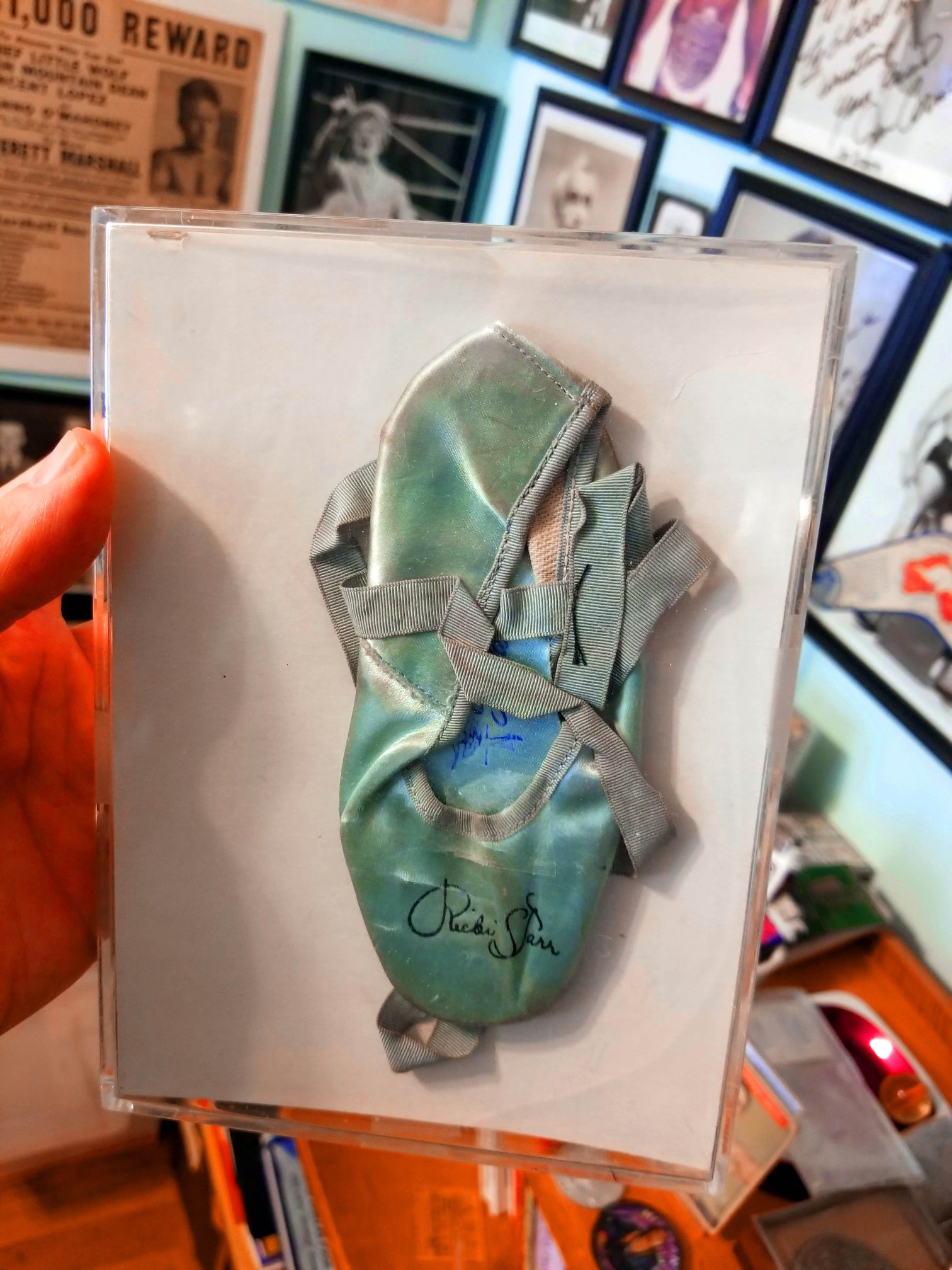 Modern fans may remember Rey Mysterio Jr. sometimes giving a front row fan a mask or Bret Hart doing so with sunglasses, but they were far from the first to do so. Such items count among the first novelty merchandise and are highly sought collectibles. Tom’s collection includes some of the first and most desired: Ricky Starr’s miniature ballet boot, The Fabulous Kangaroos’ boomerang and Gorgeous George’s Georgie Pin. These items were not available for sale and were an incentive for fans to come to the arena and see the action live. So technically, these giveaways were not merchandise, but like ring gear — a topic for another day — it is still a collectible.

Internationally, there were some merch innovations as well. Mexico had its own miniature Arcade Cards. Hawkers outside the arena sold lucha magazines, masks and plaster heads of all the wrestlers. “Teneblas, Mil Mil Masceras. I bought a few. I told them I wanted one of Fr. Tormenta but they didn’t have one. So sure enough they made one up for me the next night at a show in another part of Mexico City. In the UK I remember them hawking not only programs and photos but buttons of the wrestlers with their image on the buttons. And of course some wrestlers like Gordon Maxine, he sang and he would sell his 45s at the shows. I know a number of wrestlers recorded and had records out but I don’t know if they sold them at the shows or not. Sweet Daddy Siki and maybe Len Rossi down in Tennessee, he had a country vibe.” 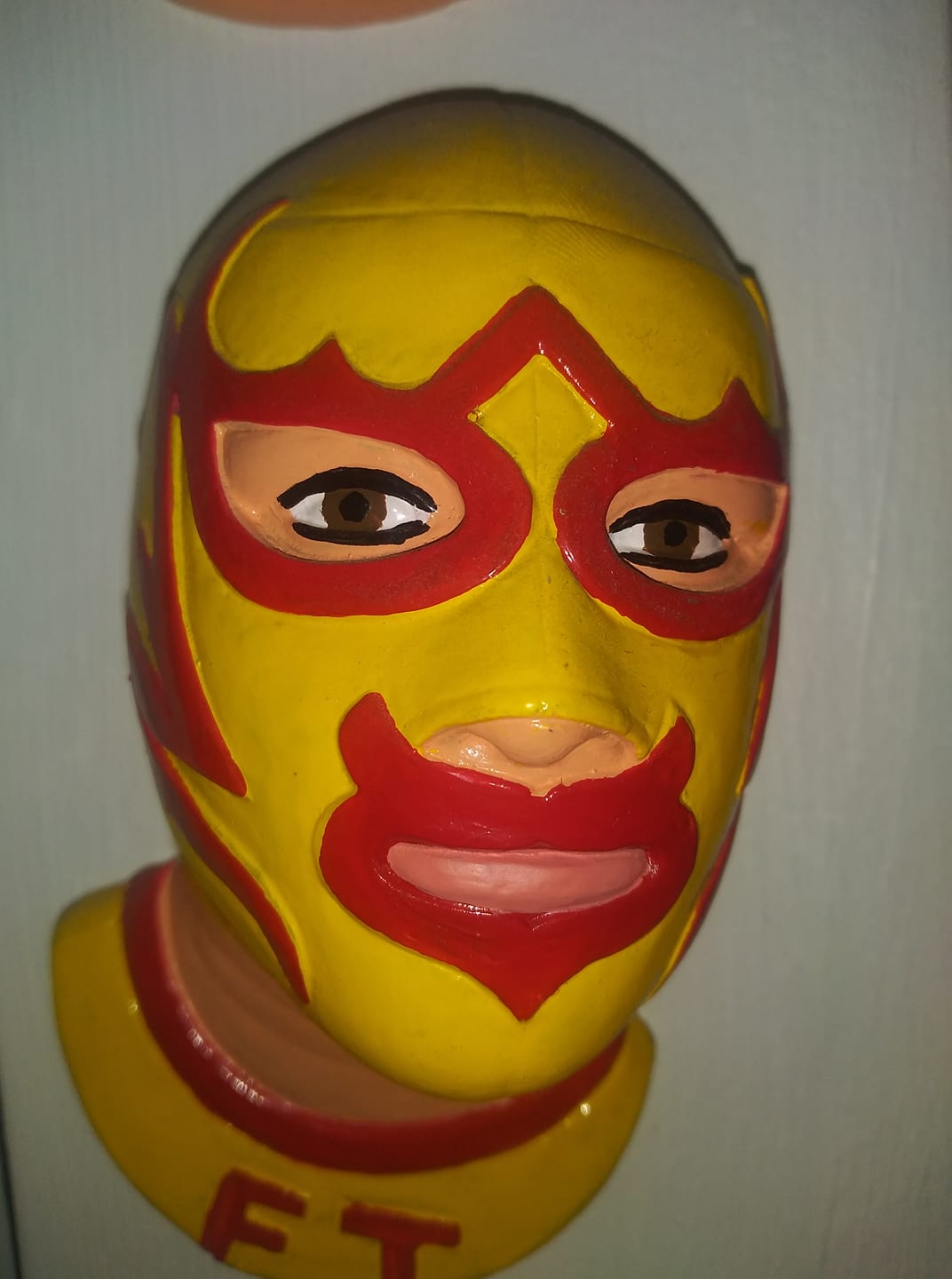 Merchandise that tapped into fads like bumper stickers would be common in wrestling. But perhaps only one man showed the vision of Vince McMahon before he did.

According to Tom, the man who really started novelties in wrestling was the late Boyd Pierce, ring announcer, commentator and also the program editor for the Dallas, Texas, promotion. Beyond exhibit cards, he also released pens with “Wrestling: King of Sports” and for special up-coming matches like “NWA Champion (Harley Race) vs Fritz Von Erich.” He also released ash trays, cigarette lighters, book marks. 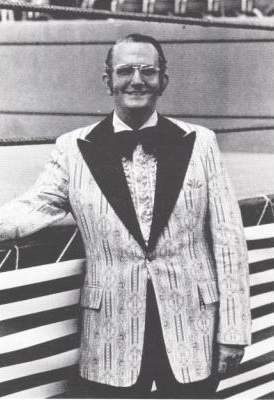 Boyd Pierce. The man with a vision.

“He was a guy that had a vision,” Burke says. “In the ’60s and ’70s people didn’t think of that. Wrestling was not marketable other than the product in the ring and maybe programs and pictures and that’s it. They didn’t have the vision.”

Today, Boyd Pierce’s goodies look quaint. A fan now can get any and everything.

Not that Tom Burke, fan of 60+ years, is okay with that. He is especially annoyed with lookalike titles:

“I have a major issue with replica belts. Of course, wrestling has changed totally. But it takes away the importance of having a world championship belt. And I hate those WWE belts, they’re so ugly there’s no character at all.”

Tom Burke’s collection is always in transition, and you can check out what he has for sale on his Facebook page.

ADDENDUM: Tom Burke was a guest on John Arezzi’s Pro Wrestling Spotlight Live on July 5, 2020, along with SlamWrestling.net’s Jamie Hemmings.