On February 11th, Ron Dobratz died. To today’s fan, used to the Internet and newsletters, his name doesn’t mean much. But it should. Dobratz was one of the key figures in fandom that helped open up the business to fans who wanted to know more.

Dobratz published 19 different fanzines and newsletters during his life, including the second issue (Oct/Nov 1972) of the Illustrated Wrestling Digest newsletter, reproduced below. Most were of a quality unseen at the time. He was a member of various fan clubs, including the W.F.I.A., U.A.W.F., and the Cauliflower Alley Club over the years.

The 64-year-old Dobratz died in his hometown of Rockford, Illinois of cancer. He was married to Donna Poli in June 24, 1967, and they had two daughters, Theresa (Paul) Wich and Patricia Dobratz and three grandchildren, Tyler, Stacy and Faith. He taught U.S. history in high school for 30 years, and taught driver’s education part time after retiring.

His obituary in the local newspaper shared a bit about Dobratz’s passions:

A Cubs fan who experienced only three winning seasons in 21 years, Ronald bought Sunday season tickets (from) 1969 through 1971, watching their best teams fail to enter the World Series. It was frustrating to observe all the other National League teams of the 1950s ‘pennant fever’ become less than unrealistic. Ron was interested in most sports, but his passion was professional wrestling. He treasured his friendship with Philip Dedrick, who also appreciated the talent involved in making something look real when it was not. Ron wrote for several magazines, and produced 19 of his own publications during the early 1970s. His collection of video tapes and memorabilia is among the finest to be found anywhere.

To know more about Ron Dobratz, SLAM! Wrestling turned to some of his friends and fellow wrestling writers. In the days before email, these correspondents in various parts of the country took the time to write letters back and forth. 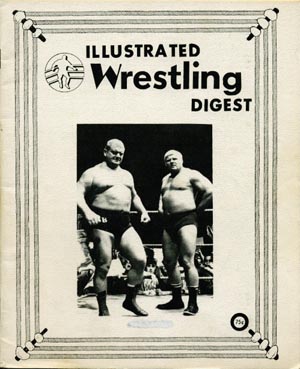 Scott Teal has a long and varied association with pro wrestling. Today, he’s the man behind Crowbar Press, which has published the J.J. Dillon and Ole Anderson books, and the great Whatever Happened To … newsletters. But back in the 1970s, he was a fan in Florida writing to Dobratz:

I probably began corresponding with Ron Dobratz in 1972, when I was publishing The Tampa Scene, which later became known as Florida Fan-Fare. We traded results and information. Ron’s newsletter was much more than just a newsletter. It was more of a magazine with great information that you couldn’t find anywhere else during that time. Ron was way ahead of his time and should have stayed with it. Not only was his magazine informative, but it was neat and professional-looking.

Ron was always willing to share what he had with others. He will be missed and should be remembered as “the pioneer” of the modern era of newsletters, or what we call the “dirtsheets.” He had definite heat from Verne Gagne and many others in the business who didn’t like the things he was printing.

His newsletters were the best of their time and I wish I still had my copies of them. They would be the most accurate historical context of what wrestling was in the early ’70s. He and Burt Ray were the pioneers of wrestling newsletters. He was definitely an inspiration to me growing up and it was sad for me as a fan when he decided to stop doing the newsletters.

Greg Mosorjak was a fan who eventually got into wrestling at the local level as the manager Count Grog. He was a subscriber, and Dobratz’s work opened his eyes:

His newsletters were the first thing I ever order from a fan club section of a wrestling magazine. I can’t remember the year but I think it was 1972. It was the first time I ever saw that wrestlers I saw on TV wrestled somewhere other than Pittsburgh or Cleveland-Buffalo. Though I bought magazines at the store they didn’t carry the results and somewhat more update news that his newsletters did.

Jim Connolly from Barrie, Ontario, who works as referee Eddington James, also had his wrestling world opened up by Dobratz:

Dobratz’s Wrestling Information Bulletin (from Chicago, as I recall), was the first newsletter I was exposed to. It posted observations and results unlike those of the Apter mags. The comments were by fans and were more up to date that the store magazines.

Mike Mooneyham, who pens a wrestling column for the Charleston Post and Courier, and is the co-author of Sex, Lies, and Headlocks, shared his memories of Dobratz:

I had worked with Burt Ray in the ’60s, and he was the pioneer of what would become known as wrestling “dirt sheets” and later newsletters. While most were fairly primitive back then, consisting mostly of area results combined with news reports, “Uncle Burt’s” Matmania was a fairly comprehensive monthly offering of results and news from around the country and even abroad.

When Matmania folded, Ron Dobratz became the No. 1 source in the country for “inside” wrestling news, delivering results and news from the many territories around the country and providing information to hardcore fans that they certainly weren’t getting in the wrestling magazines of the day. Having run a fan club of my own for a period, I could certainly appreciate the time and effort mat devotees like Burt Ray and Ronald Dobratz put into their operations, which were head and shoulders above other “bulletins” as they were known at the time. Ron’s Wrestling Information Fan Club and his International Wrestling Digest were the cream of the crop.

Much like the Observer and Torch newsletters today, the publications produced by Burt and Ron paved the way for new generations of wrestling fans. Back then, of course, it was much more difficult to get inside the closed wrestling business, but Ron was tireless and totally dedicated in his efforts, and had an outstanding lineup of correspondents, many of whom went on to publish newsletters of their own and report on the industry.

If there’s ever a hall of fame for wrestling writers, there’ll be a special place for Ron Dobratz.

Pennsylvania’s Ken Jugan would one day become indy worker Lord Zoltan. But in the ’70s, he was one of many obsessed wrestling fans, willing to do whatever was necessary to learn more about the business:

Ron used to put out a wrestling publication, a newsletter/bulletin as they were called back in those great early Fan Club days. His publication was one that listed tons of news from the old wrestling territories and results from matches in most major cities. Back before the internet and cheap long distance phone call service, our only source of getting news was from publications such as his. The only other source I had was handwriting numerous letters to my many friends that I became pen pals with or had met in cities that I either saved enough money to fly to or else caught Greyhound buses to. This was back in the days when hopping on a Greyhound to ride all day and sometimes night to get to cities such as Detroit, St. Louis, etc. to see first time match-ups or unique match-ups that you would possibly never have a chance to see again. Ron would report on many of the shows that you just could not get to but needed that fix to read and find out the latest news. Those were the good old days. Now, nothing is unique any more. The drama and suspense is gone.

Ron Dobratz was laid to rest Thursday, February 16, 2006. His family has asked that memorials be made to Rockford Rescue Mission or a charity of choice.