In 1989, Vince McMahon Jr., then owner of Titan Sports Inc., the corporate arm of World Wrestling Federation, confessed to the New Jersey State Senate what almost everyone had already known or suspected about professional wrestling.

Admitting that all wrestling matches were staged events and therefore not legitimate sporting contests, McMahon Jr. argued for the exemption of his operations from the meddling state athletic commissions, and more importantly, from taxation on the revenues from WWF live shows and the pay-per-view specials. The bill was eventually shot down, and although the long-awaited formal acknowledgement about the business was a non-event for wrestling fans, for the rest of the general public it provided a derisive spin on the saying, “It’s only wrestling.” 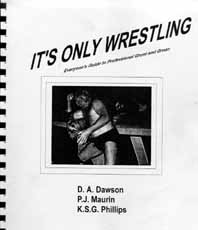 The authors, Dr. Don Dawson, Peter J. Maurin, and Ken Phillips, of the book It’s Only Wrestling: Everyone’s Guide to Professional Grunt and Groan utilized this saying because while they know the matches are bogus, the entertainment value of watching “how well the two wrestlers work together to make the action appear real” is unbeatable. It’s Only Wrestling chronicles the history of pro wrestling and its business structure, and tackles issues as racism, sexism, and steroids use among the wrestlers.

It’s Only Wrestling will ultimately disappoint both the “smart” or “hardcore” fans – wrestling jargon for those who “don’t always buy what the promoter is selling” – and the “mark” fans – the gullible followers. Both groups are ill-served by the book’s skin-deep tour of the wrestling world. With its unimaginative and rather pedestrian style of prose, and the lack of a strong narrative and punchy writing, the book resembles a collection of half-baked newspaper articles.

Not surprisingly, the genesis of pro wrestling can be traced backed to the heady days of P. T. Barnum and vaudeville’s smoke-and-mirror shows when charlatans and hucksters traveled from town to town preying on the naivete of their audiences. Challenges to step in the ring with their in-house wrestlers were issued to the onlookers who usually bet against the participants from the audiences. Of course, the individuals who stepped forth and eventually won were secretly the troupes’ own members. The authors’ manner of providing wrestling history is naming breathlessly all the important wrestlers but never pausing to look beyond the caricatures and the schticks on the stage to flesh out their background and the world around them. Of what little light is shed on the personal lives of several wrestlers, the most engaging are the tragic stories:

–Andre “the Giant” Rousimoff who suffered from acromegaly – a condition that causes the body to produce high quantities of growth hormones. While aging at a rapid rate, his hands, feet, and head, but not his body, continued to grow until his death at 46.
–“Superstar” Billy Graham, who now walks with a cane after his once-powerful body was ravaged by a degenerative joint disease resulting from many years of heavy steroids use.
-David, Mike, Chris, and Kerry Von Erich Adkisson whose alcohol/drug habits led to their suicides. The authors contend the brothers’ father Jack pressured them and that many of their problems stemmed from the patriarch’s high expectations.

Too often, the authors do not attempt to make their sweeping claims more credible or provide the context on several points. The wrestling business, like any other, isn’t privy to racism and there had been racist incidents such as the hiring of a white man with a deep tan and a Hawaiian on one occasion to portray blacks. When the book points out, however, that only one black wrestler had been crowned the world champion, it only invites more questions such as the popularity level of wrestling among the black population and the percentage of black wrestlers in the business. In addition, the 1994 trial that cleared McMahon Jr. on charges of conspiracy to distribute steroids is frustratingly never elaborated on. After all, this was the trial where Hulk Hogan admitted his long-time use of steroids.

A minor quibble but a chapter on more “realistic” events such as The Ultimate Fighting Challenge and whether it has any influence in the development of pro wrestling would have been an interesting footnote.

A self-published book, It’s Only Wrestling has the look and feel of a manuscript. Perhaps, a big-time publisher could pick it up, throw some money on it, and above all, provide them with a proper editor.