With the release of WWE’s World Class Championship Wrestling DVD — the second documentary to celebrate the company — interest is high in the promotion. So let’s take a look back at some of the books that relate to WCCW. 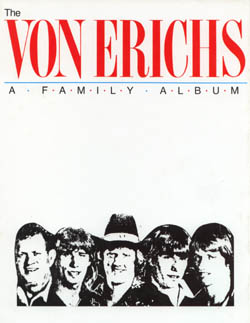 The two key books are pretty obvious, even if they aren’t easy to find and essentially stick to kayfabe. Or perhaps more specific to this case, keeps the mythology of the Von Erichs alive.

The Von Erichs: A Family Album came out in 1987, with text by Kirk Dooley. Published by the Dallas-based Taylor Publishing Company, it features a well-balanced mix of photos — many indeed from rare and revealing from the Von Erich family itself — and narrative.

But it can be a bit nauseating. Right from the start, the tragedies of the Von Erich family (at this point, Jack Jr., David and Mike had died) are compared to the trials the Kennedys had gone through. “And mournfully, as the sons died in their respective public arenas, part of America died with them. Such is the case when we lose our heros (sic).”

This whopper always makes me laugh as well: “Their father, Fritz Von Erich, retired in 1982 as probably the best professional wrestler ever.”Fortunately, once the reader gets past Page 1, it’s a little less cringe-worthy. There are some great tales of Fritz’s early days growing up, playing football and meeting Doris, and both are quoted frequently. Money woes are not ignored, giving the reader a bigger picture of what was going on in their lives before settling in Dallas to promote. “I was back to eating creamy peanut butter,” recalled Doris at one point. “When I was feeling particularly wealthy, I’d buy some jelly to go along with it.” The early tragedies, like Jack Jr.’s electrocution and the death of Doris’ brother David, really pull at the heart.

The politics of the wrestling game are not handled quite as well, with kayfabe never broken to any great extent. According to the Von Erich story, Dallas promoter Ed McLemore needed Fritz to wrestle for him because “the crowds had gone down to zero.” Six weeks of television appearances later, Fritz Von Erich made his first Sportatorium appearance. “Then Fritz entered the ring and sold out the Sportatorium. They were turning them away at the door, and a new era in Dallas wrestling was born in one evening.”

Once the family is settled in Dallas, the surviving boys enter the storyline, and are quoted numerous times. Kevin and Kerry talk about growing up, their dogs, their pranks, and the fun they’d have together. The sports exploits of all the boys are detailed as well. Needless to say, Fritz never comes off as a villain, someone driven to get his sons involved in his trade, the cost to their lives be damned. The Christian aspect of the Von Erich story is there as well, but it isn’t used as a sledgehammer to make any religious conversions. 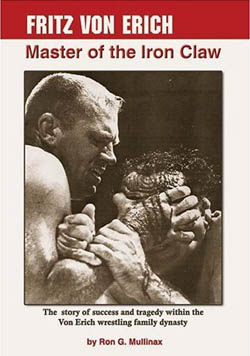 The other key book for fans of World Class Championship Wrestling is Fritz Von Erich: Master of the Iron Claw, by Ron G. Mullinax. Though it came out in 2005 from Hats Off Books of Tuscon, Arizona, it reads much more like a death-bed confessional at times from Fritz, who died in 1997. A friend of the family, Mullinax ended up moving in with Fritz during the final months of his life, and was encouraged by the family patriarch to document his career. So while Mullinax is credited as the author, much of the book is told in Fritz’s voice.With a decade having passed since The Von Erichs: A Family Album came out, Fritz had lost two more sons — Chris and Kerry — and divorced from Doris. He had much on his soul to share. For example, it is obvious that he still loves Doris, and that faith alone hadn’t kept him going through it all.

Easily the best parts of Master of the Iron Claw are when Mullinax inserts himself into the storyline, like scoring the ailing Fritz some marijuana to combat the pain, or talking about how difficult it can be dealing with the Von Erich family at times. He is not the world’s most polished writer by any means, and apparently very little questioning into Fritz’s tales was done. Reprinting excerpts from many newspaper clippings doesn’t add legitimacy, but does capture the moment and how the press treated the Von Erich legacy.

The sole survivor, Kevin Von Erich, is quoted as well, though apparently a falling out between Mullinax and the oldest Von Erich son complicated the book’s publication.

In the end, both Master of the Iron Claw and The Von Erichs: A Family Album, will leave a hardcore fan wanting more. There’s little about how the Dallas office was run, or the people Fritz worked with for decades, like Gary Hart or announcer Bill Mercer. It’s like a story told through tunnel vision, with the blinders keeping out anything but the Von Erich story.

The core story of Fritz Von Erich’s ascension from Jack Adkisson to football player to wrestler to patriarch is essentially the same in both books. With one, you get great photos. With the other, you get a lot more insight. So picking one over the other isn’t the issue; the real issue is that the Mullinax book is easy to obtain online, while the older picture book may set you back a pretty penny or two.