Despite having suffered a concussion that nearly put an end to his in-ring career before it even began, Max Boyer has been able to keep a sense of humour about the pro wrestling business. After all, it’s hard to resist a telling a story about Jacques Rougeau, midgets and all-terrain vehicles.

Boyer is a relatively well-known in the Quebec and Ontario wrestling scene. He has wrestled primarily out of Montreal with the IWS federation the last number of years. 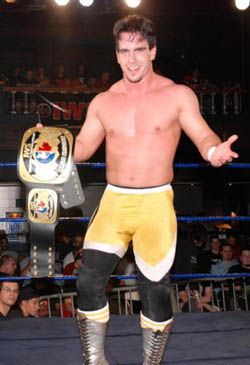 Max Boyer with the IWS Canadian Title in September 2007.

He started wrestling in May 2002 at Jacques Rougeau Jr.’s wrestling school, also known as Lutte Internationale 2000. “I trained with the wrestling school for two years before suffering a concussion that put me on the sidelines for a year and a half,” Boyer told SLAM! Wrestling. “After that long break, I returned to pro wrestling again in 2005 when Kevin Steen got me a ‘dark match’ with IWS.”

The 5-foot-8, 190-pound Boyer sees many benefits in being an independent wrestler rather than being affiliated exclusively with one promotion. “I love being an indy guy because I get to choose where and when wrestle,” he explained. “It is possible to take some time off if I am injured or just don’t feel like traveling. I do not aspire to be a future TNA or WWE superstar. I just want to be a good wrestler and to entertain the fans and to stay injury free as much as possible.”

Even though Boyer enjoys working the indy scene, he does see a few downsides. “I see a lot of indy guys not taking care of themselves and it makes me mad. Not only do some guys not go to the gym, but when they are hurt, they think it is normal and keep going.”

For having wrestled for just a short period of time, Boyer — only 23 — has worked a lot of different promotions and notices a difference between the fans in various promotions. “I can say that the IWS (based in Montreal) and the CZW (based in Philadelphia) crowds are pretty much the same. A really tough crowd unless they understand what you are doing in the ring (in terms of ‘telling a story’). These feds like moves, cool spots and blood. When I go to Ontario, the crowds are really easy to work with. They are there for a fun time and get into the wrestling which is great.”

He has earned the respect of his fellow wrestlers. “Boyer is The Dynamite Kid to my Tiger Mask. Any time we’ve entered in the ring together we have a great match no matter what style. He’s a determined and disciplined individual and that has been the reason for his success! He’s one of the top guys here in Quebec and no doubt a breakout star in the future,” commented Don Paysan (Luciano Luprano). 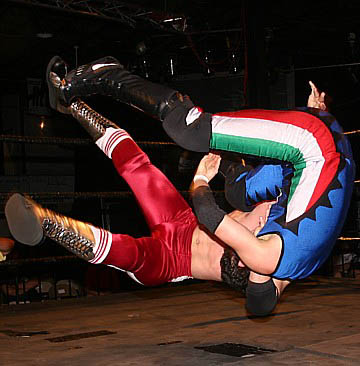 Boyer executes his finishing move, “The LifeStyle”, a wrist clutch fisherman DDT, during a Chikara bout against Don Paysan.

Boyer has exciting plans for his wrestling career. “I would love to be in Japan some time in the near future. I feel like going on the road for wrestling and learning even more. I wish to wrestle more often against guys who have a lot more experience than I. I think it is a great way to improve your character and to find what is working.”

But back to that funny story.

“It was somewhere in 2002. Jacques Rougeau was showing two midget wrestlers how to make their entrance with two ATVs, a regular one and a small one. Jacques has little to no patience. The guy on the bigger ATV was unable to do what Jacques wanted to see so he showed the midget how to do it right. There was a lot of pressure on the midget worker to properly do the entrance. He got up on the ATV, stepped on the gas and decided to raise one arm in the air but he accidentally stepped even more on the gas. So you guessed it, he ended up in the first rows, chairs flying everywhere. The first thing he did was raise his arms and said ‘I’m okay! I’m ok guys!’ All the other workers died laughing.”