To accurately portray the era of World Class Championship Wrestling, WWE goes all out with their latest release that focuses on the 1980s glory days in Texas. I mean, how could a documentary be complete when talking about the promotion without comments from Triple H, Shawn Michaels and Mick Foley? Obviously, the Von Erich family is heavily featured, but in my estimation, some key elements of WCCW are left off this compilation.

The story of WCCW and the Von Erich clan is the focal point of The Triumph and Tragedy of World Class Championship Wrestling, as well it should be. This promotion is one whose ups and downs have been well documented and that is very true here with this WWE release. 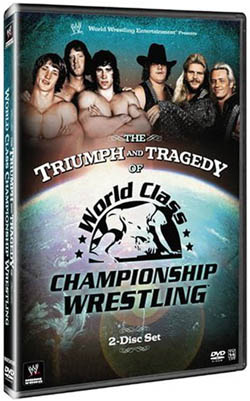 Several legends from the height of World Class take part in the documentary portion of the DVD, including Skandor Akbar, Bill Mercer, Kevin Von Erich, Gary Hart and the living Freebirds — Michael Hayes, a pudgy and bald Jimmy Garvin and Buddy Roberts, who speaks with the aid of a device he holds to his throat after battling throat cancer.

But what makes no sense is the fact that the aforementioned WWE stars of today give their take on WCCW. Seeing Triple H recap what went on down south and act like he was there makes absolutely no sense. Same goes for HBK, but at least he grew up in Texas. Jim Ross? Sure. And Foley, while he was there when WCCW became the United States Wrestling Association, fit in somehow. (We are, however, finally spared from Bruce Pritchard or Steve Lombardi, who always seem to get into these WWE docs.)

The history of World Class is given a quick sub two-hour recap and that’s not near enough time. Old footage is shown of Fritz Von Erich from when he became a Von Erich (Kevin says it’s because after the oldest Von Erich, Jack, Jr., died, Fritz became very aggressive and became a wrestler with a nasty German gimmick). It’s a huge slight to a promotion that was solid for decades before cable TV propelled it into the big time.

A big chunk of the DVD is devoted to the Von Erichs-Freebirds feud and the many tragedies that befell World Class, such as the deaths of David, Mike, Chris and Kerry Von Erich and Gino Hernandez, the latter of which brings Hart to tears.

But the DVD also shows that WCCW was perhaps ahead of its time in terms of popularity and overall appeal. Of course, once the booking direction went AWOL (Hart mentions Ken Mantell and the Fritz “heart attack” is mentioned) and Fritz took a step back, the promotion was doomed.

Kerry going to the Fed in 1990 gets substantial air time, though his debut match against “Playboy” Buddy Rose and Intercontinental title win over “Mr. Perfect” Curt Hennig is only shown in passing. Not to be neglected, his NWA title win over Ric Flair (who is also interviewed on the DVD) is also only shown in highlights.

Kerry’s drug problem, and drugs in WCCW in general, are discussed at great length and all who speak say that was Kerry’s downfall and that’s why he never received the big push he was destined for. His title unification match at SuperClash III at the end of 1988 with Jerry “The King” Lawler gets mention and Lawler tells the story of how he thinks Kerry may have been under the influence and in fact cuts himself on the arm before the match even started.

When Kerry dies, that’s pretty much the end of the documentary portion.

Items missing? Lance Von Erich as the “cousin” is barely touched on, Bruiser Brody is ignored, as is the role of the pioneering use of valets in the ring — c’mon, they couldn’t get Missy Hyatt to talk? Sunshine? Precious? Some comments from ring announcer Mark Lowrance would have been interesting. What is included, however, is the use of the word “heel” and “booker” and things like that not normally seen in the usually kayfabe-heavy WWE. Hearing from Ken Mantell — probably the key behind-the-scenes guy — would have been great as well, especially to hear his side of things, as a few talking heads, like Hayes, take a few potshots at him.

The extras on the disc include a tea party with “Gentleman” Chris Adams, the Badstreet USA music video — a song which WILL get stuck in your head and drive you nuts — and a piece on Kerry’s photography hobby.

The matches on the second disc all play a somewhat-pivotal role in the history of WCCW.

The first match is probably 50 years old or so and is from Texas Rasslin’ (yes, that’s how it was written) with Duke Keomuka against Ricky Starr. All matches back in the day were the best 2-of-3 falls. There is only one camera for this vintage black and white match and the announcer also mentions that wrestlers have a 20-count to get back in the ring from the floor and a 10-count from the apron.

Fritz’ retirement match against King Kong Bundy (with hair!) at Texas Stadium for the American title is also shown in its entirety. Bundy getting pinned in the end zone definitely supercedes its time.

Kerry and Flair from Star Wars ’82 (the match that started the legendary feud between the Von Erichs and Freebirds), a match from 1983 with Iceman King Parsons, Kevin and David against the Freebirds, Parsons and Roberts in a Hair vs. Hair bout from Star Wars ’83, Fritz, Mike and David winning the WCCW Six-Man titles at the David Von Erich memorial show, Adams and Sunshine versus Garvin and Precious from the same show, as well as Kabuki battling Kamala. But no Kerry and Flair? Makes no sense.

Other matches on the second DVD are the Fantastics against the Midnight Express (2nd David Von Erich Parade of Champions) for the American tag titles, Adams vs. Kevin from 1985, Bruiser Brody and The Missing Link versus One Man Gang and Rick Rude from 1986 and a classic Brody and Abdullah the Butcher cage match from the 3rd Cotton Bowl Extravaganza in 1986.

Only a two-disc set, I would have thought telling this story would have taken double that. At times, this DVD seems rushed and certain time frames might be skipped (the changing of WCCW to USWA is told in about two minutes, and needless to say, Jerry Jarrett doesn’t get his say). But hearing Kevin tell about each death in his family he was faced to deal with, including being there a hair too late when Chris shot himself and feeling his thumb go into the bullet hole, it’s amazing Kevin has been able to keep his sanity.

Still, this is recommended to anyone that knows the history or to anyone looking to learn more about World Class. The access to the matches and vignettes makes it superior to the Heroes of World Class documentary as a product, but the documentary itself is stronger on the earlier, independently-produced DVD.