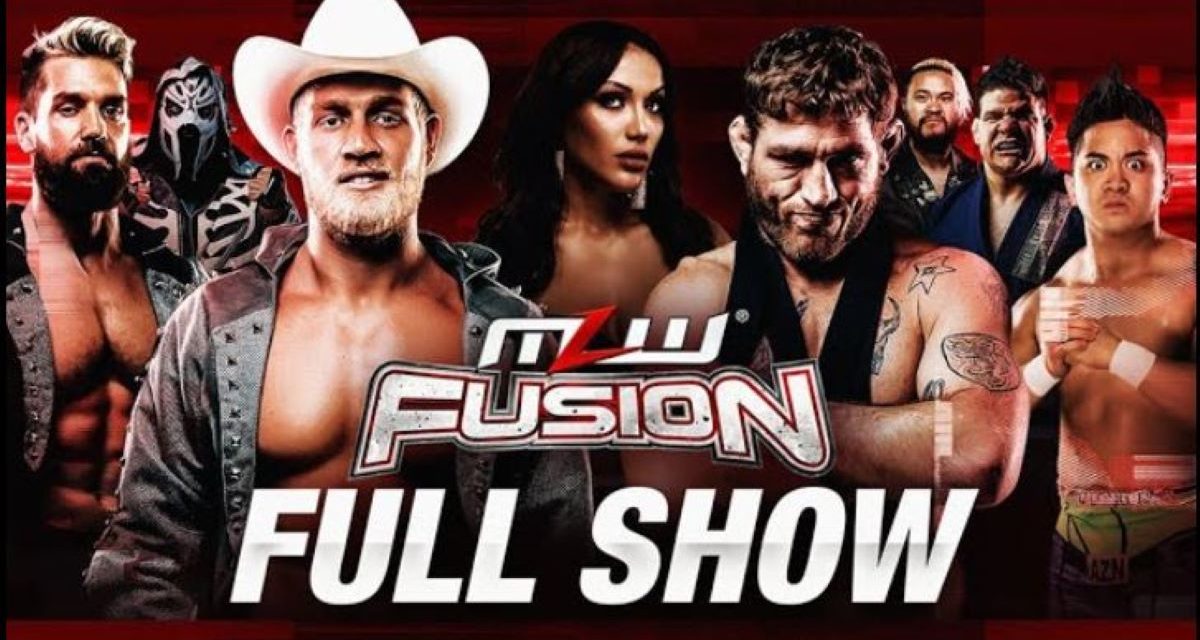 A match two years in the making, this will be the blow out match in the feud between Marshall Von Erich and “Filthy” Tom Lawlor.  What led to this point?  We get a cold open that summarizes the hatred between these two.

With the main event setting the stage for tonight’s show, we go live from the Gilt Nightclub in Orlando, FL.  Your Commentators Ray Flores and fight analyst St. Laurent have the call, and we start with your First Match of the night… 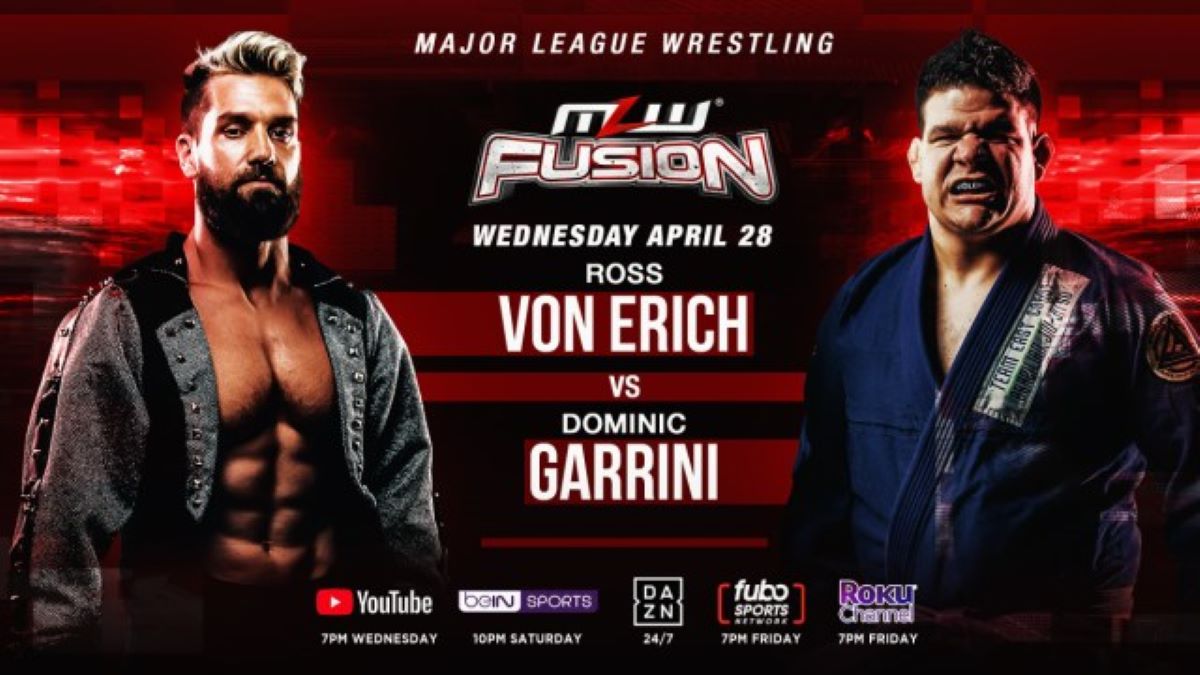 This is essentially the warmup (the amuse bouche, if you’re fancy AF like) for the main event, and Team Filthy wants momentum going into this match.  The bell rings, and Garrini goes to the ground trying to lure Ross, but gets back up since the elder von Erich ain’t playing Garrini’s mind games.  Match then goes to the mat, which is a game of one-upmanship, but Garrini is showing the edge, but Ross is able to keep up the pace.  At one point, Garrini gets Ross with a triangle choke and a nice transition to an armbar, but Ross moves Garrini to pin his shoulders, so Garrini ends up breaking the hold.  Then both Ross and Garrini chop away at each other, but Ross gets his kicks in.  But Garrini has a few grappling tricks, with a nasty looking guillotine choke to Ross, but Ross manages to get to the ropes.  With Garrini frustrated he can’t put away Ross, and a suplex is countered by the elder Von Erich to a modified Falcon arrow for the win.

So Pro Wrestling Illustrated has a story speculating on who El Jefe is from Azteca Underground.  Supposedly it could be anyone from Konnan to Dario Cueto (Spoiler alert:  he died in Lucha Underground Season 3) and…Tony Khan.  Personally it would be funnier/scarier if it turned out El Jefe was Donald Trump, since he’s familiar with opportunities and consequences.  Of course for that to work, he’d have to be able to tolerate brown people, and that would be downright nutty.

Backstage, Lawlor is upset by what happened to Garrini. He calms down for a bit, and has an idea. He gets on the smartphone to slide in someone’s DM, apparently.  Hope he’s not going to slide into Alicia Atout’s DM’s.

We get a video package on the Myron Reed/Lio Rush rematch, and the match taking place next week.  We should get media coverage later tonight.

The Cameras go outside the club, where Lawlor in a hoodie meets with “referee” Tim Donaghy, and tells him he needs help with some “business” and wants things on the up and up for tonight’s match.  While Lawlor says this, he’s sliding an envelope in Donaghy’s hands. Best line of the night by Donaghy: “It’s a little lighter than I’m used to, but I’ll see what I can do.”  Just like that, my crack on Trump sound not too far-fetched if this criminal can make a living in the squared circle.

Well, better get on to the next match before some snowflake tries to rank me out for that last comment… 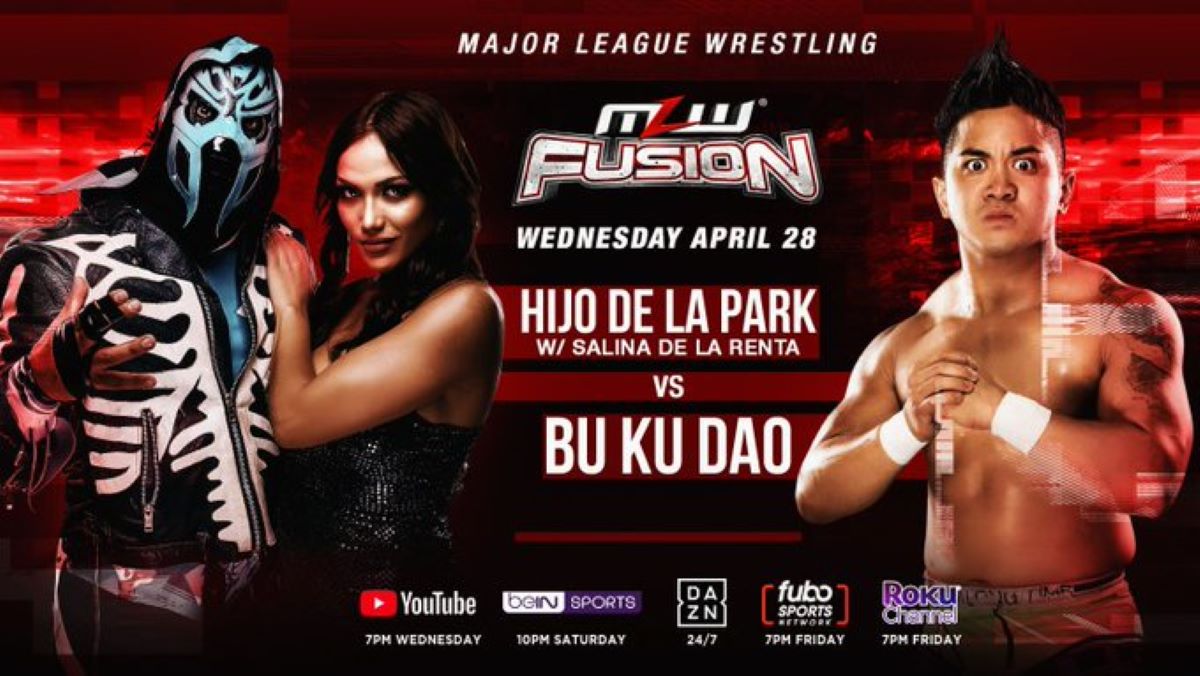 The story of this match is Dao is fresh off his win with TJP last week, and de la Renta is on thin ice with el Jefe.  Start has Hijo showing a rare moment of sportsmanship by offering his hand to Dao.  Dao takes his hand, and Hijo promptly clotheslines him.  From there, Hijo is in control stomping the smaller Dao.  Hijo even uses his belt just like papa Park to whip Dao.  Hijo keeps up the offense, even taking Dao outside the ring, and slamming him to the hard floor.  Back in, Hijo gets a cocky cover, but Dao kicks out at one.  Hijo sends Dao to the ropes, but Dao comes back with a shoulder tackle, followed by knees, and send Hijo to the outside and he delivers a suicida.  Back in, Dao delivers a textbook Crucifix Driver for the pin, but Dao gets a two count.  Dao tries to send Hijo to the corner, but it gets reversed, and Hijo counters with a codebreaker and covers for a two count.  Hijo tries to follow up, but Dao gets Hijo in a tilt-a-whirl and transitions to a crossface to Hijo.  Dao doesn’t get the submissions cinched in, so he sends Hijo to the corner, but gets reversed, and Hijo hits Dao with double knees.  Sensing victory, he props Dao up top and goes to finish him off but Dao hits the (very clumsy looking) spinning flatliner, and gets the pin.

After the match, de la Renta storms off, and one wonders what consequences are in store for her with El Jefe.  In the back, Dao dedicates the match to his parents, and is done with TJP.

Alicia Atout has “Breaking News” in that a championship team being gathered to create title fights in the future, with names like Mr. Toru Kidu from Japan’s DragonGate, Andy Kildan from RevPro, and someone in MLW will joining that committee.  Who is that, you ask?  They’re keeping that a secret, for now, but she’ll be giving us more information as it develops.

Next we get Atout with Marshall Von Erich for his thoughts on the Main Event. Before he can get into that, Lawlor comes with Donaghy, who tells Marshall to take a drug test. Shenanigans abound, people.

We get a breaking update of “footage” of de la Renta being led to a car by a masked man.  Clearly, El Jefe is upset by this.

Well, the media conference for the MLW Middleweight title on May 6th ain’t happening, as Rush decides to bail.  We do get Myron Reed, and he’s sacrificed time with his family and friends to stay focused on next week’s match. He lets us know he ain’t playing, and Rush better show up.

Alicia Atout is earning her Interview Queen crown tonight, as she is with Hammerstone, who’s celebrating on almost two years as the MLW Openweight champion. Since Your Boy Hammer is a man of the people, he wants to give to the people what they want:  a match to face Jacob Fatu for the heavyweight strap.  Now Hammer says Fatu may climb Muscle Mountain barefoot, but he’ll be the one to swing the Nightmare Pendulum on the Contra Unit member to gain the victory.

Atout is backstage with Lawlor, and Donaghy says Marshall is clean. Marshall comes back, and shows Lawlor how “clean” it is by splashing him with the “results.”  Marshall says it’s a bit warm.  All I can say is that can’t taste good….and I’ve had Budweiser.

We get an announcement that because Lio Rush skipped the media event, he will be fined (the drama!), and Richard Holliday will be in action next week. Before we can get more details, the “feed is interrupted” as Josef Samael offers counterpoint to Hammerstone. He holds the power, and he talks about when he took over MLW and reworked contracts with a gatekeeper clause. So the challenge is…denied.  Hail…ah, ferget it!

We now head to your Main Event of the night… 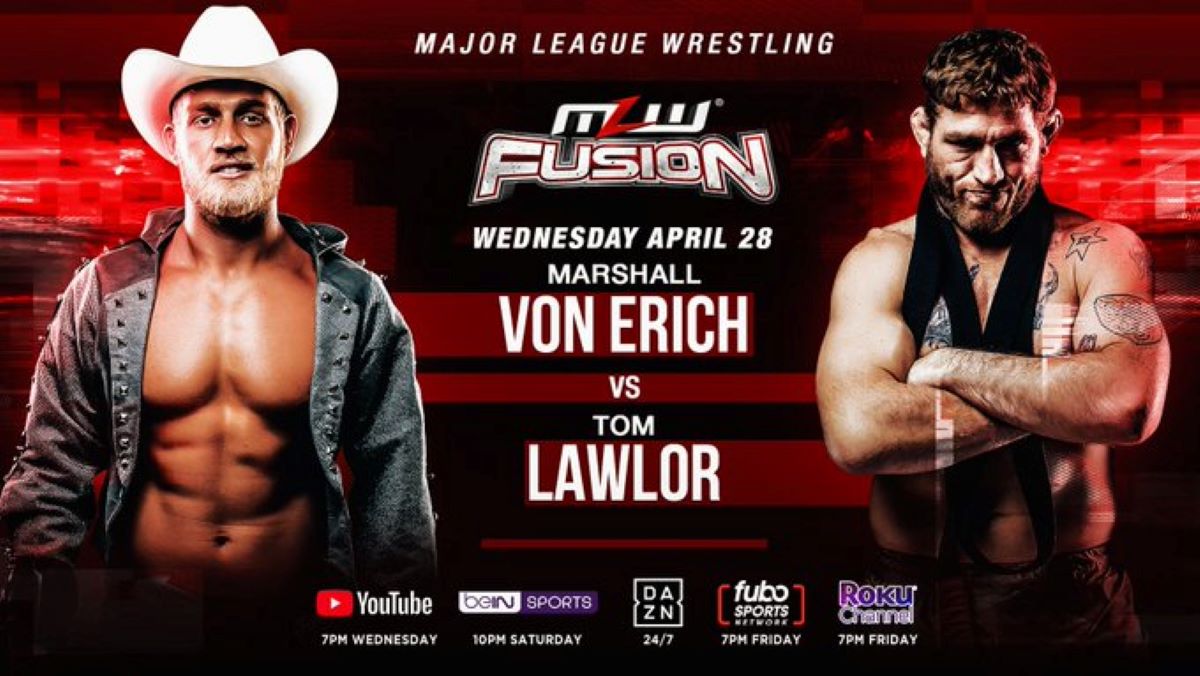 Flores and St. Laurent note that Lawlor picked up the win a while back, gaining the new NJPW Strong Openweight belt, and that this match is going to settle things once and for all between the two men.  While Marshall has the size and the strength, Lawlor will be focusing on the injured knee if he is going to have a chance to win.

From the bell ring Lawlor goes on the attack to Marshall’s knee with a dropkick.  Marshall momentarily gains the advantage, but Lawlor focused back on knee.  At one point, Marshall has Lawlor hooked in a waist lock, and then a switch by Lawlor. Lawlor shoves Marshal, who almost runs into the ref, but Lawlor chop blocks the knee again to down the younger Von Erich.   Even though Lawlor offense is knee-based, Marshall manages to get back up, and Marshall unloads with forearms to the chest and back of Lawlor, finishing with a clothesline to send him down.  Marshall pins, but Team Filthy is on the apron.  As the ref is distracted (because shenanigans), a wrench makes its way to Lawlor, who uses it to smash Marshall’s bad knee

Just like that, Lawlor gets back in control, and takes the covering off Marshall’s knee and stomps away.  Marshall isn’t done yet, and goes for two standing dropkicks, but his knee gives away, as he feels the effects of Lawlor’s attacks.  Lawlor tries to finish it, tying up Marshall to a unique figure four, but Marshall’s long reach allows him to get the Iron Claw on Lawlor’s thick skull.  Marshall is standing up with Lawlor’s head in the Claw and using his forearm shivers, but a kick to the knee and an impressive uranage slam by Lawlor stops that again.  Now Lawlor goes a guillotine choke, but Marshall goes back to the Iron Claw to a slam for a two count.  Back to the Iron Claw, and once again, a Lawlor kick to the knee breaks the hold.  Lawlor then goes with a Half Crab to a side Single Crab leg submission.  Marshall tries to hang on, passes out from the pain, and the ref has no choice but to call the match.

After the match, Team Filthy swarms the ring and attack the fallen Von Erich brothers, but ACH comes in to even the score.  Its pandemonium, as bodies are everywhere, as the show fades to black.

Really, the story is the the blow off to the Von Erich/Lawlor feud, and it did not disappoint.  I do like that fact that MLW makes feuds like this matter, and will doo a slow burn before the big blow off.  Marshall is the perfect babyface, and Lawlor is a filthy, dirty, disgusting, brutal, skanky, bottom feeding, trash bag heel* of the highest order.

As for the hype for MLW on Vice, we’ll keep you up too date, but until then…see you in seven!