AEW Dynamite: Parley for your right to fight 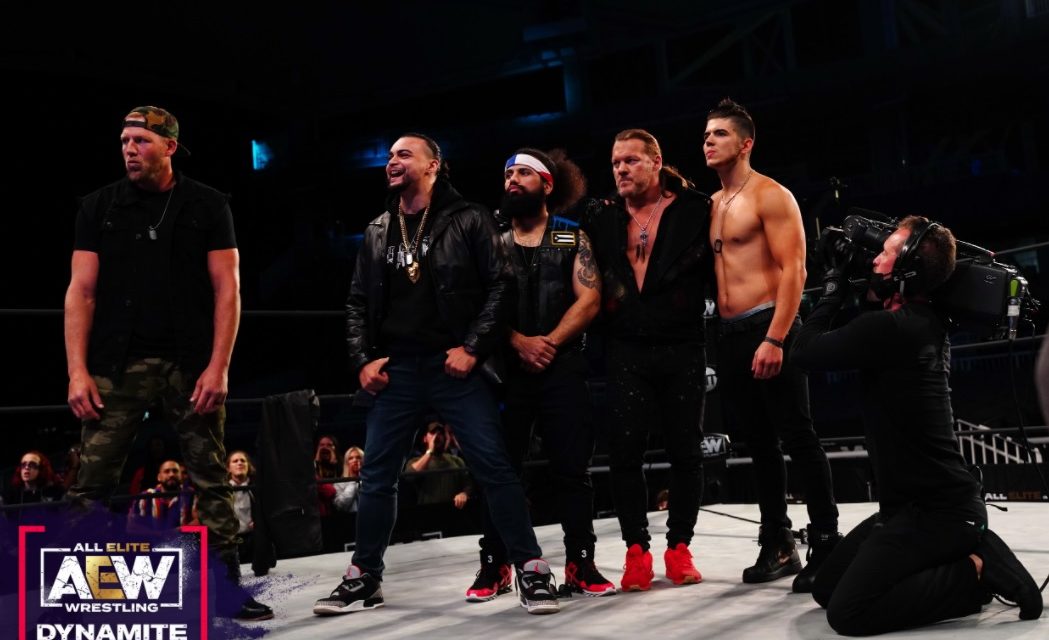 We’re closing in on one of AEW’s not-really-pay-per-views, seeing as you don’t have to pay for it. But Blood and Guts should be almost as good as a PPV, with AEW building up a huge collision between its two biggest stables and undoubtedly loading up the rest of the card tonight. Let’s not waste time, then – away to Daily’s Place we go for Dynamite.

Jim Ross gets to say “the referees have lost control” as early as he’s ever said it, as Team Taz assaults Page before the bell and Cage powerbombs him on the stage, despite the valiant efforts of the Dark Order. Oh man, they’re going to use this as the reason for Cage to get the win here, aren’t they? That’s exactly what happens as Cage wins, and it says something that it’s framed as a big upset. Not exactly the kind of push Cage got when he first arrived in AEW.

Hop in the limo with the Elite and new Impact World Champion Kenny Omega and hang out with the cool kids. Or don’t. Omega is a little annoyed at Jon Moxley and Eddie Kingston ramming their trailer last week, even though they weren’t in it. Kenny promises he will find out how tough Eddie is when he has a match tonight against … Michael Nakazawa. Did anyone run that by Michael first? I’m guessing no.

I’m still not 100% sold on the Bucks as heels, but I admit some of the stuff they do that tweaks wrestling tropes. Tonight’s case in point: They do the “twin switch” even though they aren’t twins and you can easily tell them apart. Heh. They cheat to win, just to rub it in even more that the Sydals don’t get the title shot they would have earned with a victory. Alas.

No time for celebration for the Bucks as SCU comes out with a hot mic. Frankie Kazarian reminds us that they have promised to break up the next time they lose as a tag team, but they remain undefeated since making that vow. That has shot them up the ranks to No. 1 contender status, and an angry Christopher Daniels says they plan on taking the titles from the Bucks and making the company better for it.

Jade Cargill seems to not understand how managers work, questioning why they would want a cut of her money. Um, then just don’t have a manager?

Admit it, “Penta says” is now one of the moments you look forward to most in any given episode of Dynamite. It’s all good. Totally understandable. Abrahantes ends up getting hauled into the ring in the midst of what has turned into a fairly long match, but as the ref tends to him, Penta gets a taste of his own medicine when Trent slips him a mic for an object-aided Orange Punch. What can settle this feud? Best of three cheats match, maybe?

Dr. Britt Baker has figured out the rankings game and maneuvered her way to the top. She’s pumped to show the champ why she’s the real face of the women’s division.

Will The Pinnacle or the Inner Circle have the advantage at Blood and Guts? Only one way to find out, and that’s with a parley. Captain Jack would be proud. If nothing else, we find out some of the rules to their showdown, which will involve the teams alternating and sending a new man in every two minutes. There’s supposed to be a coin toss to determine who will have the advantage, but Shawn Spears tries to universally declare that Pinnacle gets the edge. If everyone is going to get some mic time here, can we just skip right to Wardlow? Or, OK, MJF will be fine too. Jericho’s promo is also great, though his ode to respect and coming up through the ranks of pro wrestling might as well hang a flashing LED jacket on him saying “I’m kind of a face now.”

Ever the gentleman, Kingston refuses to fight Nakazawa and calls for Omega. The triple champ (he holds a AAA belt as well) ain’t about that life, but after Nakazawa’s assault with a laptop falls short, Kingston threatens to break his ankle. Omega says Nak knows what he signed up for and tries to send Brandon Cutler out, but Mox arrives and all of a sudden, our heroes have Kenny right where they want him. Don Callis pleads for them not to break Omega’s ankle and says they can have whatever they want. They demand a tag team match with Omega and Nakazawa, and Callis has no choice but to grant their wish. See you at Blood and Guts.

Backstage, Taz wants to deliver a message to Christian Cage, who conveniently shows up to hear it in person. He’s got a strong response that he surprisingly gets to deliver without interruption from Taz.

Statlander just returned from injury, so it’s only logical that she goes over here, even if Ford probably doesn’t deserve to lose since she hasn’t received much time on Dynamite lately. Someone has to lose, though (not exactly since this is wrestling, but you get where I’m going), and it is indeed Ford who takes the L.

Comoroto just looks like a relic from a bygone era of wrestling, and I mean that as a compliment. Johnson gets some time in the spotlight as well, with the announcers positioning him as the “prize pupil of he Nightmare Factory.” With Anthony Ogogo getting some shots in on the outside, QT secures a win for his team. Comoroto smacks Rhodes with his own cowbell to add insult to injury, or perhaps the other way around. As the fans chant “you still suck” at Marshall, the Gunn Club comes into beat on him a bit.

Winners: The Factory by pinfall

Marshall tries to escape to the bus he rode in on, but Cody Rhodes is waiting for him there. With a rumble still going on at ringside, Cody and QT end up throwing hands on top of the bus, which leads to Marshall suffering in the Figure Four.

Whoa, Yuji Nagata is coming to Dynamite in two weeks to wrestle Mox for his NJPW belt. Yes please!

Maybe trying to convince himself, Sabian tells the cameraman it’s no big deal that Miro is looking for him, but a few seconds later, Miro is beating the crap out of him. That does sort of seem like a big deal.

Plenty of time left for the main event, so this is almost certainly going to be the longest match 10 has ever had on Dynamite. He’s ranked No. 5 in the men’s singles rankings, making him legitimate for this spot and even more so by wrestling logic standards. Sting and the Dark Order have something of a standoff on the outside, but Ethan Page has no problem sneaking from the crowd and smashing Allin into the post. Title change coming? Nope – even though he appears to be in trouble and blacking out from a full nelson, Allin somehow rolls his challenger up and escapes with a three count.

Page gets some help by a hooded figure from the crowd, and it’s Scorpio Sky, of course. The heels lay into both Allin and Sting until Lance Archer can make the save. That’s a hectic and slightly overbooked end to this show, so we’ll see you in seven!

I was all ready to give this three stars because the whole show was solid but nothing special, but I bumped it up another half-star for the parley and Jericho’s promo. Good stuff. Blood and Guts has been a long time coming since it was originally going to happen last spring before the pandemic squashed those plans, and it should at least have an entertaining main event.