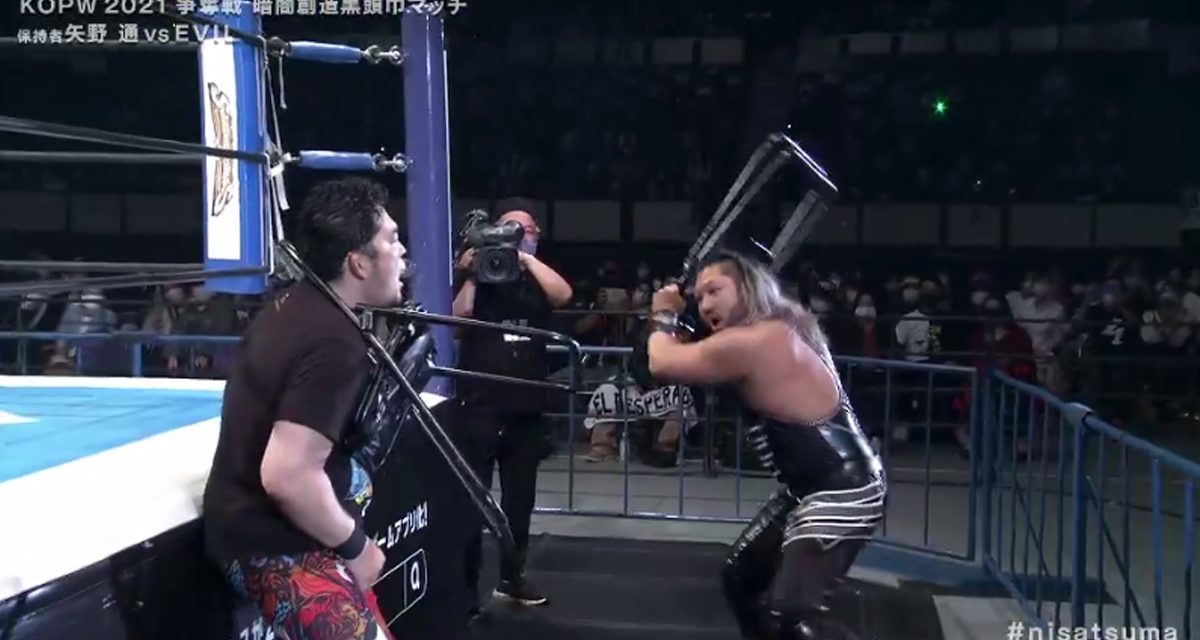 Blindfold matches are a bad idea no matter who promotes them or books them. The match between Jake ‘The Snake’ Roberts versus Rick ‘The Model’ Martel at WrestleMania 7 is probably the most infamous debacle. At night one of NJPW’s Satsuma No Kuno Event, provisional KOPW 2021 champion Toru Yano defended the crown against Evil in a blindfold match that was actually okay. Maybe it was because the wrestlers weren’t blindfolded but could use hoods on their foe at any time to put them at a disadvantage.

As he was being introduced, Yano sprayed so much sanitizer that an actual cloud formed in the ring. Both wrestlers go for the hoods draped over their respective corners as soon as the bell rings. Yano rips one of the turnbuckles off throwing it to Evil. Yano slips behind Evil, puts a hood over his head, punches him in the “lower abdomen” for a two count.

Yano argues with the official about the count. Evil sneaks up on Yano placing the hood on his head. Dick Togo whacks Yano with the turnbuckle as he stumbles blindly into the ropes. Evil bashes Yano with his solo Conchairto move on the floor. Evil points to an invisible home run. Yano slumps down.

Dick Togo approaches Yano with his garotte. The official is quick to head him off. While the official is distracted though, Evil tapes Yano’s arms to a ringside barrier. Evil puts one of the hoods on him for good measure. Yano struggles to free himself. Lurking nearby, Dick Togo laughs.

Yano shakes the hood off. Evil punches, kicks and chokes a helpless Yano who cannot free himself. The Young Lions at ringside eventually give Yano a helping hand. Continuing the running time keeper gag, Evil drapes a hood over the time keeper’s head, rams Yano into the ringside barrier which in turn knocks over the time keeper and the table he is sitting at. 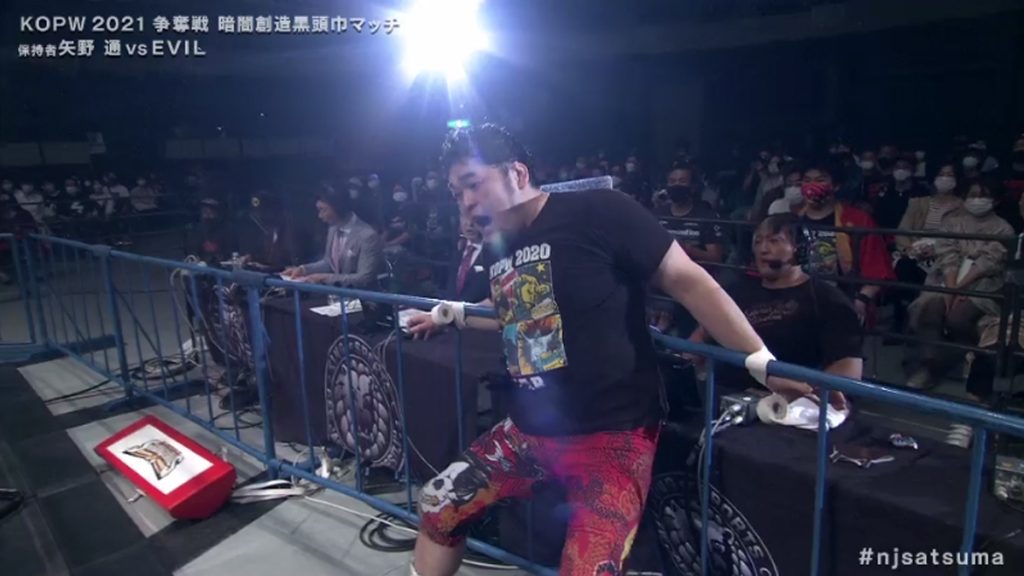 Yano is all tied up. Courtesy: NJPW.

Togo lowers the boom on Yano on the floor as the official’s back is turned. Evil steps outside to heave Yano under the ring. Yano crawls back into the ring at seventeen. Yano turns things around by whipping Evil into the exposed turnbuckle. Yano pushes Evil into Togo who goes flying off the apron. Yano dodges a charging Evil who runs headlong into the exposed buckle for a second time. Togo’s interference is met with a hood over his head. Yano mule-kicks Evil in the crotch placing a hood on him. Everyone, including the official, is laying on the mat with a hood on. Togo leaves the ring and heads off the back. I wonder what he is up to?

The official lays a count on Evil and Yano. Yano slingshots Evil into the exposed buckle again. As Yano places a hood on Evil the lights in the arena go out. When they come back on Evil is strangling Yano with Togo’s garotte. Dick Togo returns to the ring playing innocent. A blinded Yano accidentally takes out the official. Evil and Togo double team Yano until he deals a double punch to the groin, one for each ot them. Yano places a hood on Evil. Evil mistakenly gives Togo Everything is Evil. Yano punches Evil in the “lower abdomen” a second time and rolls him up to continue his reign as the provisional KOPW 2021 champion.

In a big win for the Young Lions, Tsuji makes Kidd submit to a Boston Crab.

Bullet Club attacks the Tekkers from behind as they make their entrance. Despite the big brawl on the floor the official starts the match calling for the bell. Jado lays in some punches on Taichi. The official calls for the break. Jado shoves him to the mat but isn’t disqualified. In a reversal of their last match, Taichi gets to the ladder first and uses it on Bullet Club. Suzuki-gun is disqualified.

In an interesting switch, Bullet Club comes out to their original theme song. Tanahashi makes Gedo tap out to his Texas Cloverleaf.

You guessed it. Bushi is pinned by Cobb once again on this tour.

Sho gets the 1-2-3 with an assisted Shock Arrow on Kanemaru.