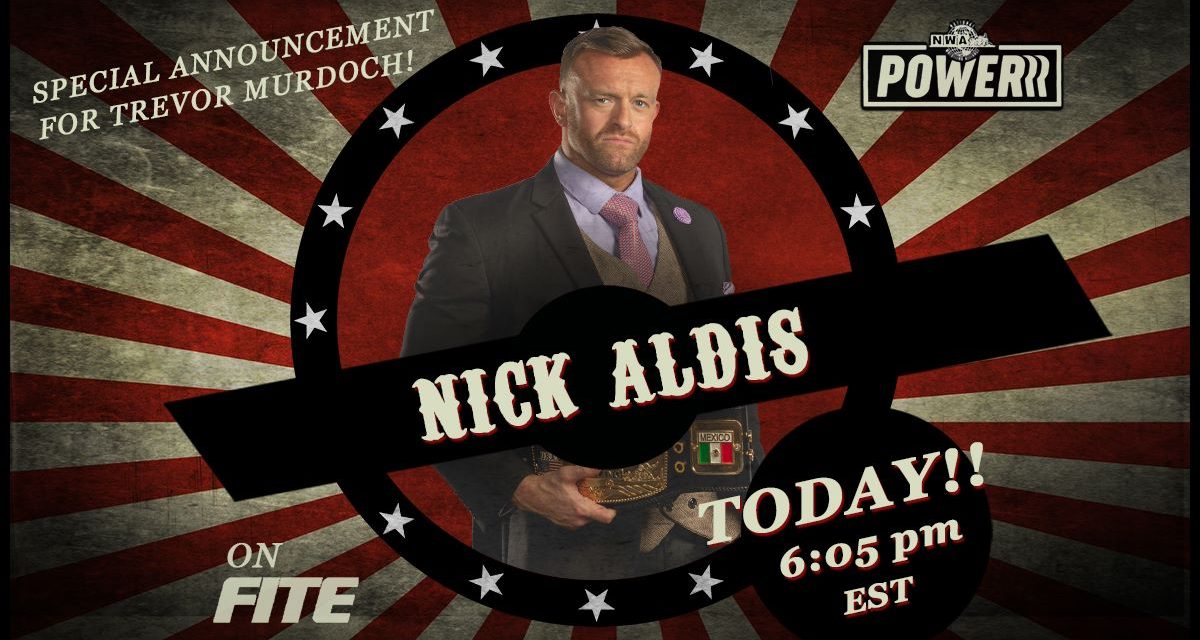 When dealing with “The National Treasure” Nick Aldis, Trevor Murdoch proves time and again he’s will to step Into The Fire to face him.  That also means we are live from the GPB Studios in Atlanta, GA. As always, Joe Galli, Tim Storm, and Velvet Sky have the call.

Once again, we turn it over to Kyle Davis at the Podium with another segment of What’s Causing Aldis. Aldis says he’s the dealer, he holds the cards, and he doesn’t fold. Aldis recaps of last week’s beating of Murdoch, and how he should have stayed out of his business. But he fells magnanimous, and offers Murdoch a rematch with Chris Adonis for the National Title. Davis thinks (aloud) that Aldis doesn’t want Murdoch around the NWA, and Aldis is insulted by the very notion, as he is in Davis’ lack of wearing a tie.

Aldis asks Murdoch to come out, and Murdoch obliges.  He is fuming and trying to keep his composure, and all he wants from Aldis is an apology. Aldis is sorry…he didn’t beat him down sooner (heh), but he has a deal to offer Murdoch:  a six man tag match tonight. It’ll be Team Murdoch versus Team Aldis of his choosing, and he won’t be involved.  If Murdoch’s team wins, he gets a shot at the National title. If he loses, it’s a thirty day suspension without pay. Murdoch can’t help but notice that Aldis is doing everything he can to avoid a match with him for the Ten Pounds of Gold, and calls out Aldis’ peacocking in backing away from that match.  Aldis says he would be back into anything, but still lays out the deal before Murdoch, and naturally Murdoch accepts.  To quote Pocket of Dog Snogging from the book “Fool”, there is heinous f***ery most foul afoot.

As commentary ponders what Team Murdoch could be like, and if he can win tonight, we get your First Match of the evening… 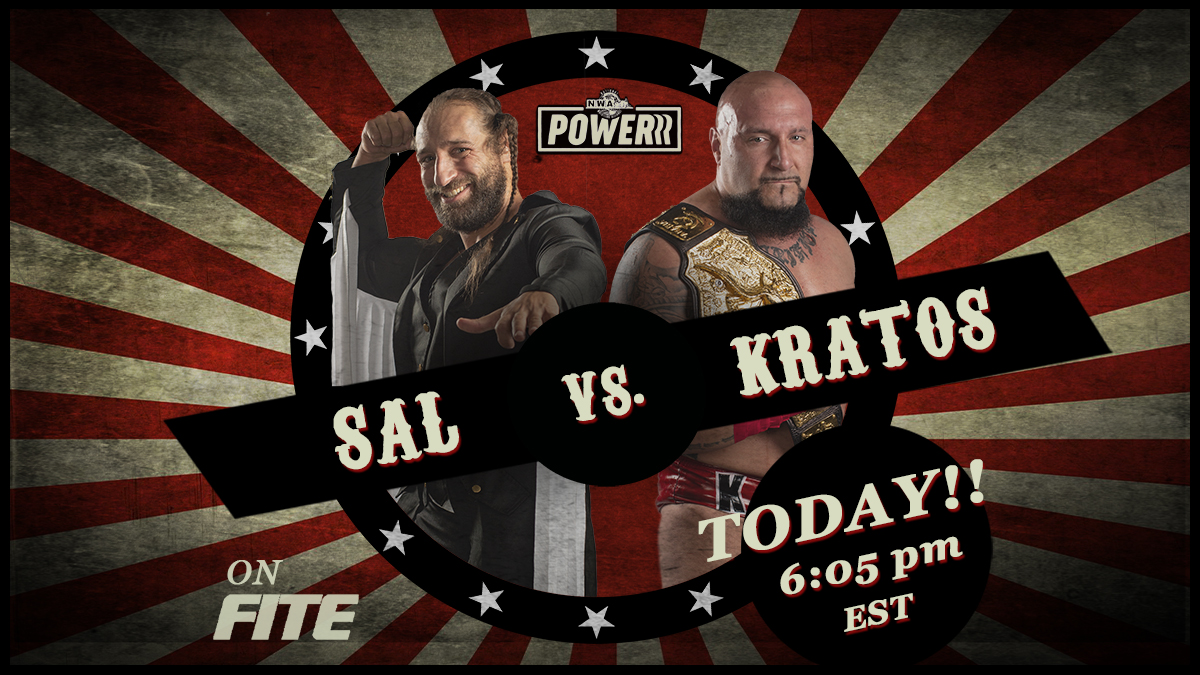 Kratos is still steaming since last week’s loss where Sal pinned his shoulders to the mat, and he is out for revenge.  Start of the match, Sal goes for the quick pin, but Kratos is having none of that, and proceeds to stomp the proverbial mudhole.  There is absolutely no mercy in Kratos, even when May Valentine comes out to plead for Sal, and then Daniel Deals comes into the ring with a chair.  He gets choke slammed by Kratos for his troubles, and goes back to putting the hurt on Rinauro.  Now, his tag partner Aron Stevens comes out, and tries (unsuccessfully) to have Kratos back off.  At that point, the ref calls the match, and it’s ruled a…

No Contest via Referee Decision

After the match, as Stevens and Valentine tend to Rinauro’s broken carcass, Kratos stalk the commentary booth and makes a beeline to Storm.  He goads him to a fight, and Storm takes off the headset, and they’re both staring daggers at each other.

Thom Latimer and Chris Adonis come out to The Podium. Latimer can’t help but notice the tag team champs are falling apart, but Latimer sees something in Kratos, and offers him a spot on their team for the six man tag tonight.  Doings are a-transpiring as we head to a break

Austin Idol, plugging away at his unitedwrestlingcollege.com, and when I tried to look it up again, I wasn’t able to get the page to load this time.  Maybe someone forgot to pay the bill?  I should look into that.

Back to Commentary, and Galli and Sky note that Tim Storm walked away to cool off after the confrontation with Kratos, but we need to head to Kyle Davis manning the podium

Next up is Jax Dane and Slice Boogie. Slice cockily talks about getting the “W” twice, and each time it’s Dane that gets pinned.  Slice can’t help but notice Dane keeps getting the capital “L” when facing him. Dane states he is a man of few words, and does his talking in the ring. Dane notices that slice is all bark, and that reminds him of his Chihuahua barks, so let’s see if Slice has some bite next week.  Yes, please!  Sign me up. 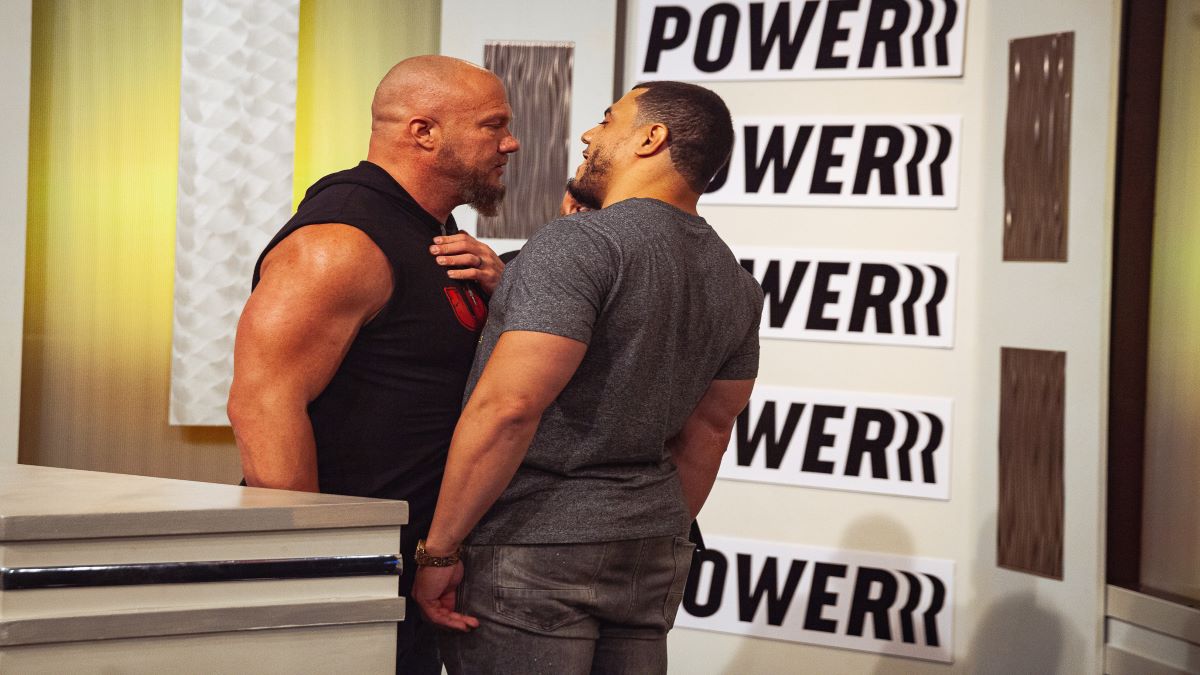 Well until then, we get a huge title match and it’s for the…. 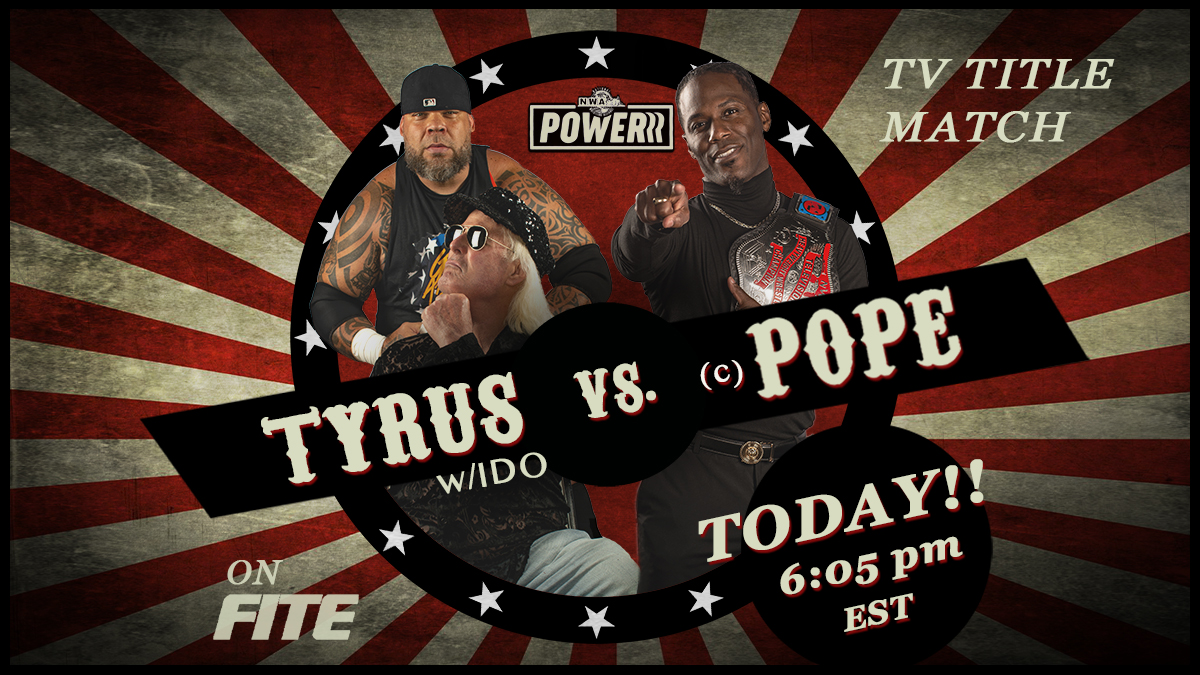 Idol makes his way to commentary, proclaiming IdolMania Powerrr, much to my, and Velvet Sky’s, annoyance.  As always these Television title matches have a 6:05 time limit, and Pope can retain by pinfall or if time runs outs.  Bell rings, and the match is a classic speed (pope) versus smash (Tyrus) match, as Pope dodges Tyrus’s attacks.  Pope goes for a headlock to Tyrus, who promptly dumps him off.  Pope then goes for a waistlock, but Tyrus rams him into the corner.  Tyrus tries to follow up with a running splash, but Pope gets out, and Tyrus rams into the corner.  While dazed, Pope goes to the opposite corner goes to deliver the double knees, but Idol comes out to the ring to grab his legs.  Pope is distracted, just enough for, enough time for a Tyrus Splash.  Tyrus goes for pinning attempts, but Pope kicks out each time.

Meanwhile, Austin Idol, is really being super annoying on commentary, and Velvet is super Skeeved by Idol’s antics.  As for me, after listening to this, I will never say another bad word about Michael Cole’s commentary…for one whole week.

With 3:23 left, Pope goes for a shoulder tackle, but bounces off Tyrus.  Tyrus gets Pope in a fierce bear hug, squeezing the life out of pope.  At the 2:24 mark, Tyrus still having that bear hug cinched, lowers Pope’s shoulder’s to the mat, but Pope raises his shoulders.  Pope fires up, and gets momentum back on his side, launching from the ropes to drop kick to the basement to a DDT.  Pope goes up top for a missile dropkick that hits the mark, and has Tyrus roll out the ring.  With 1:10 left, Idol comes back to the ring, just as Pope goes out and hits a crossbody to Tyrus.  Now Tyrus becomes the Great American Smash, and start putting the hurt on Pope, and chokes Pope, but time counts down to zero, and the ref calls the match.

Next up is Thunder Rosa and Kamille to meet in a summit to clear the air.  May Valentine and Kyle Davis are out to conduct the summit. Valentine and Davis says an advocate needs to speak on her behalf, and Rosa chooses Melina. Next, Kamille comes out, and she “picks” Taryn Terrell. 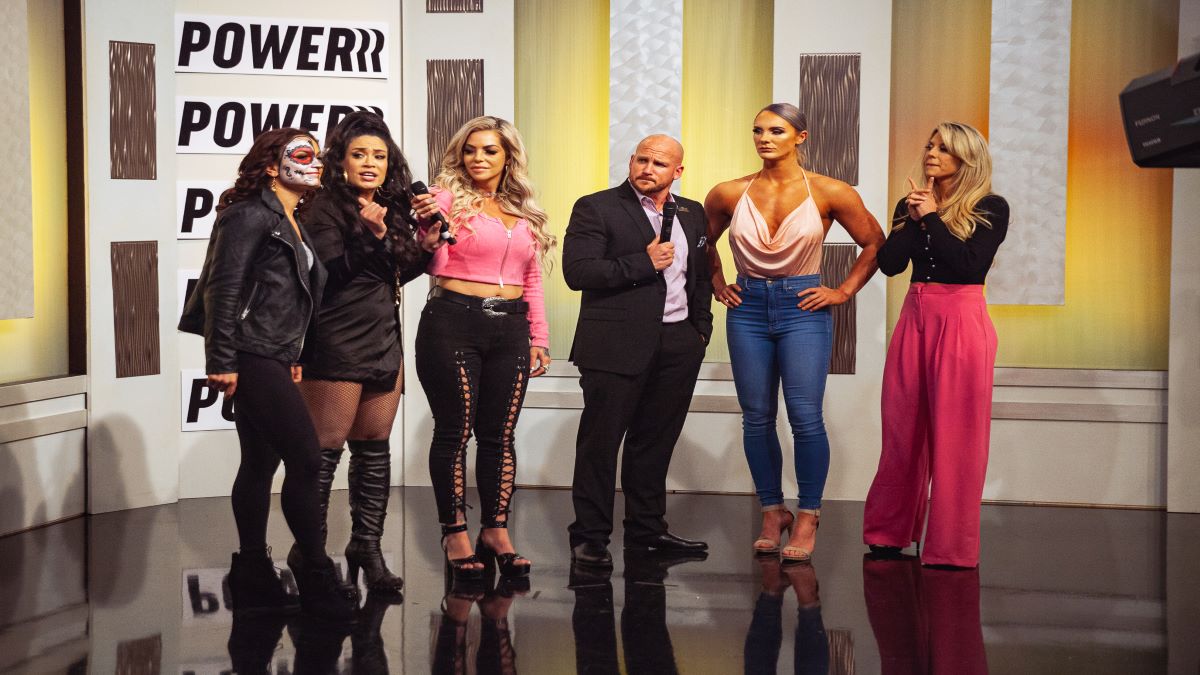 Melina hypes up Rosa, and Taryn goes full Valley Girl dissing Rosa and Melina. Melina and Rosa channel my aunts/cousins/sisters/mom temper, and fire back.  For the second time tonight, this hurts my ears listening to Taryn speak. The summit devolves to full “Mean Girls”, with each ready to come to blows, with Davis tells the girls to relax. 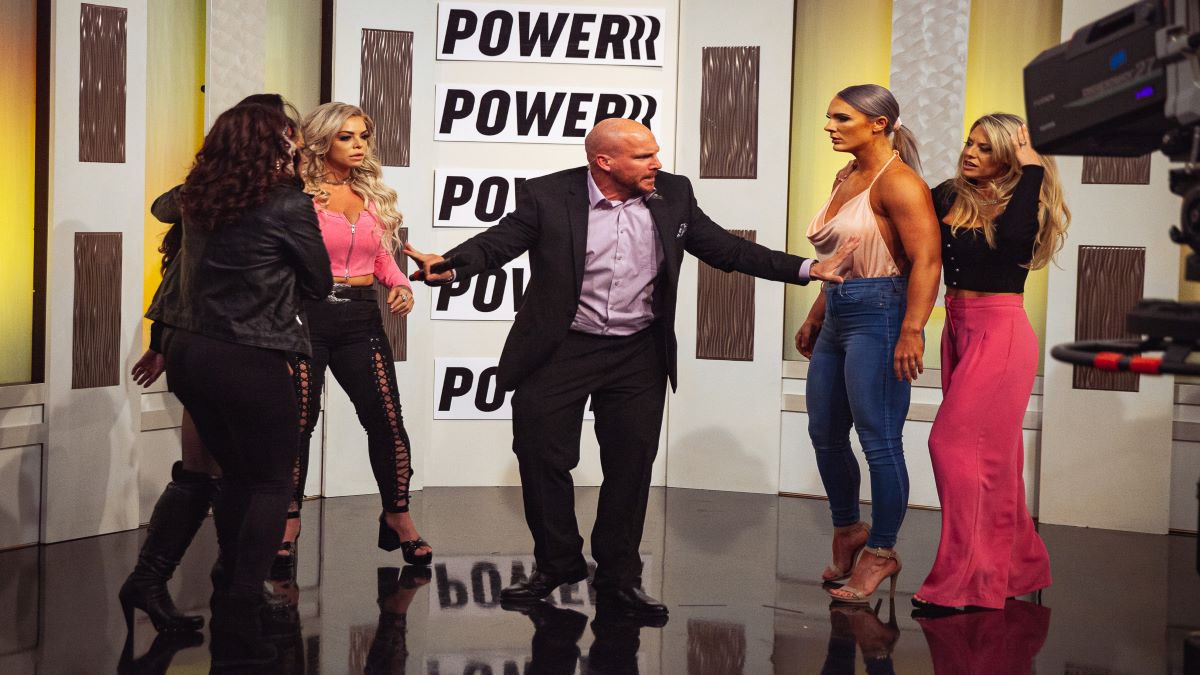 Yeah, mansplaining women to chill?  Not happening, Kyle.  Rosa almost leaps at Kamille, and Davis holds her back.  So nothing is settled, other than the fiery hatred.

Sal Rinauro comes out, taped up and still smarting from the beatdown by Kratos, but he is game, and …wait, Tim Storm comes out in his wrestling gear, offering to take his place!  Now we have a good team to even the odds against Team Aldis.

From the moment the bell rings, this is a donnybrook that spills all over the ring and outside into the studios.  At one point, Latimer and Adonis gang up on Murdoch outside.  The action finally settles and in the ring, Kratos and Stevens are face to face, but Storm tags in because he has a score to settle with Kratos. Kratos tags in Latimer, and now we get the match going.  Tim Storm takes control with a kick to Latimer’s head and neckbreaker for two. Murdoch tags in and chops away at Latimer in the corner, and gives a snapmare.  Murdoch covers, but gets a two count.  Now a tag to Stevens, who gets a side Russian sweep, followed by an elbow drop, isolating Latimer. Stevens covers but Adonis breaks up the count.  Stevens goes back on the attack, but Latimer chops his throat, and the momentum turns in favor of Team Aldis.

Adonis comes in with an elbow, but misses.  Stevens fires back with knees to Adonis’ midsection. Stevens with a tag to Murdoch, takes Adonis to the woodshed.  Adonis escapes and gets Latimer in the action.  At this point Latimer is worked over by Storm and Murdoch.  Stevens tags in, but Latimer gets the best of him.  From there, Stevens is your Face in Peril, and as Latimer and Adonis isolate Stevens from his team Murdoch compatriots, Kratos smiles at the punishment Stevens is receiving. Adonis and Latimer are showcasing great tag team cohesion, which is the opposite of Stevens/Kratos.  Latimer with a gutwrench suplex and a pin, but it gets broken up by Murdoch.  Latimer sends Stevens to the corner, and goes for a splash but misses, as Stevens barely dodges the attack.  With both men down, each is crawling to their respective corners, but Stevens finally gets the hot tag to Tim Storm and he is your Perfect Storm O’ Fire.  Now the actions spills out again outside the ring, and the donnybrook ensues, while Storm remains in the ring.  Sal gets on the apron cheering on Storm, and Storm tells him to get down.  That distraction is all Adonis needs as he sneaks up on storm to cinch in the Masterlock, followed with a half-nelson slam to pin for one, two, and three.

Your Winners via Pinfall:  Team Aldis

After the match, Stevens and Sal go to Aldis’ aid, while Murdoch is beside himself at losing the match.  Meanwhile Team Aldis laugh at Murdoch’s misfortune.  The fate of Trevor Murdoch is uncertain for the next thirty days, and it shows that Aldis is still the dealer in this house, and the house continues to win.

More of an angle-driven show, but there is truly more sizzle, and that is needed with their upcoming PPV announced for June 6th on Fite.tv.  All the pieces are moving, and the matches highlight big things.  the only this that prevented me from scoring this higher was the unnecessary women’s summit, which didn’t add much.

Now with Murdoch out for thirty days, who’s going to step up to Aldis?  Guess we’ll have too wait and see.  Until then, see you in seven, and subscribe to the show on Fite.tv