Four years later, it seems Highlander Robbie MacAllister is still coming to terms with what he refers to gravely as “The TNA Incident.”

“It was the stupidest thing I ever did,” he says between bites of scrambled eggs and peameal bacon at a truck stop near his home in Drumbo, Ontario. “It was a dumb, illogical thing.” 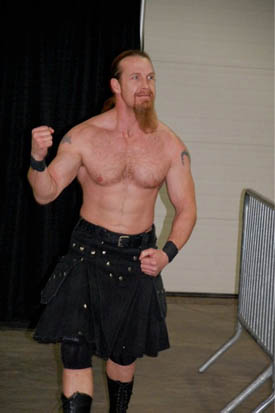 The incident, as wrestling gossip-hounds will recall, involved TV cameras catching Robbie in the audience during a broadcast of TNA Impact — a serious no-no for a contracted WWE wrestler, which resulted in him being relieved of his WrestleMania duties a few days later (and the generous paycheck that would have resulted).

“I’ve never told anybody this,” says 37-year-old Robbie, “but I was very unhappy in WWE, and in retrospect I think it was kind of my way to get fired.”

In that sense, it was a clever move, because he was sacked not long after.

His dueling perspectives on The TNA Incident are as starkly different as his own dual personalities — the kilted, wild-eyed Scotsman Highlander Robbie, and the comparatively subdued, well-mannered Derek Couch.

As Robbie, he seems to be everywhere on the Canadian independent circuit these days, having performed in every province except Manitoba (as well as tours in the UK, sometimes portraying a hillbilly character dubbed Bobby Grand).

As Derek, he spends his time outside the ring seeking out reputable promoters, negotiating his pay rate with each, personally hanging up promotional posters and plugging shows online, and sticking to an intense workout regimen.

He is one of the rarest breeds of wrestler — the kind who can earn a living purely by slogging it out on the indy circuit, with no “day job” to help pay the bills. Thanks to some name recognition from his WWE tenure (and perhaps from his infamous TNA faux pas), Robbie is frequently the star attraction at wrestling shows in high school gyms and community centres.

“Right now, I’m by far the most used guy in Canada,” he says of his schedule, which typically includes several shows each weekend, and many kilometers on the road. “When you see how busy I am, that shows that I’m entertaining.”

Robbie’s passion and work ethic haven’t gone unnoticed by the promoters who frequently hire him, including Arda Ocal of Toronto-based Maximum Pro Wrestling. “Not only does he work as much as he can, across North America and the world, but he also builds wrestling rings in his spare time,” says Ocal. “He’s working around the clock to better this business, and you can’t ask for a better guy to work with. He’s always cordial, welcoming and respectful at shows, which is always a positive in a wrestling locker room.”

In the coming weeks, he’s booked on a slate of shows with Maximum Pro Wrestling in Timmins (March 12), Woodstock (March 18) and Brampton (March 27). He’s appearing on more shows from April through June for Championship Wrestling International, and has recently accepted the position of head trainer at CWI’s new wrestling school in Hagersville, Ontario (he’ll be joined by X-Pac to show the first batch of students the ropes).

It all adds up to a grueling schedule with many of the same bumps and bruises as his WWE career (his right shoulder is currently “messed up”), but with a fraction of the fame and fortune.

While he declines to divulge actual numbers, he says he’s “getting by” with the modest wages of indie wrestling, and is enjoying the crowd interaction inherent in the small-scale shows.

The irony of his performing in wrestling’s bush leagues is that Robbie now gets to work alongside many of his childhood idols, such as The Honky Tonk Man and Bushwacker Luke, both of whom will share cards with Robbie in the near future.

“I don’t usually get star-struck, but sometimes I’ll thing to myself: ‘Cool, I’m hanging out with Bushwhacker Luke!'” he says. “Those guys from the ’80s are such recognizable characters.” 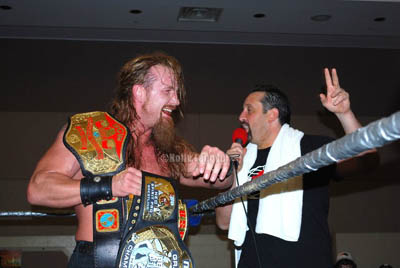 Highlander Robbie has been collecting titles. Photo by Holly Lengyel.

In many ways, Robbie himself is cut from the same cloth as the cartoonish stars of the ’80s. When he and partner Rory arrived in the WWE as The Highlanders in 2005, they seemed to be a throwback to the previous decade, when tag teams embodied cohesive identities (The British Bulldogs, The Killer Bees, The Iron Sheik and Nikolai Volkoff, and so on).

The Highlanders, bedecked in matching kilts and using the peculiar tagging technique slapping one another on the noggin, were clear-cut caricatures of grizzled, rowdy Scotsmen.

“I see myself as a throwback to the era of wrestling I grew up with,” Robbie says. “Back then, you understood why these guys would be fighting each other. It was cops and robbers, but it’s not really like that anymore.”

Perhaps because they exemplified the simpler wrestling ethos of a bygone decade, The Highlanders were never elevated beyond the mid-card.

Rory spent months out of action with an injury, while Robbie languished with occasional appearances on lower-tier programming like Heat, typically losing to a rising young star. As a result, Robbie became increasingly miserable.

“It’s so hard when you’re working for the company you always wanted to work for, and you’re doing what you love, but you’re not getting used,” he says. “I was going crazy. I love wrestling and that’s all I wanted to do, so not getting used takes a mental toll.” 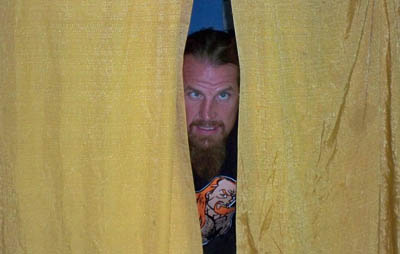 Robbie is caught behind the curtain. Photo by Nykki Seaira Hardy Hickenbottom.

That mental toll, he now believes, is what led him to that TNA taping in Orlando, where the cameras zoomed in on his face and commentator Mike Tenay boasted that “many stars… of the wrestling universe” were on hand for the event.

While Robbie clearly tried to shield his face with his hand, the damage was done.

“WWE is the upper echelon in wrestling… so if I’m shown on TNA TV, it degrades the WWE product and myself,” he says.

At the time, when he felt like an unwanted bit player in WWE, his decision to watch some of his friends wrestle at a TNA seemed justifiable.

With the wisdom of hindsight, however, he still beats himself up over his decision.

“I think I sort of understand why I did it, but I’m still sorry I did it,” he explains. “I shouldn’t have been there at all.”

As much as he enjoys the indie wrestling gigs, Robbie is a firm believer in second chances, and he hopes the bigwigs at WWE are too.

“Every job I’ve had in my life, I’ve had twice. I’ve been fired for something stupid, then come back and I’ve always been a model employee the second time.” (Trivia tidbit: one of those past jobs was chicken-catching.)

Looking back, Robbie said he “absolutely loved” working for the WWE (when he was actually wrestling, that is), and would seize any opportunity to play in the big leagues one more time.

And, if necessary, he’ll leave the kilt behind.

“If they call tomorrow, I could cut my hair and become a high-flying babyface,” he says. “I’m in really good shape, I’m versatile, and I’m not just the Scottish guy who scratches his beard and screams ‘I’m Robbie!'”

Whether WWE gives him that second chance, or whether he continues tussling with rookies in high school gymnasiums, Robbie says he is happy anytime he steps a big furry boot into a wrestling ring.

Colin Hunter is the latest in a long line of journalists in the Hunter clan, whose lineage traces back to the Ayrshire region of Scotland. It is unknown whether the Hunter and MacAllister clans ever feuded.