As rugged as the craggy rocks of the Scottish Highlands, they bring to mind the land of lochs, glens, castles and bagpipes as they approach the squared circle. They’re also living proof that tag team wrestling hasn’t gone the way of the warring clans of old. Just don’t let them catch you laughing at their kilts!

Since debuting in 2000, the Highlanders — Robbie and Rory MacAlister — have become bit players on WWE television. Most recently, they appeared on Smackdown as security guards, but they’ve also wrestled a handful of matches over the past year, earning both praise and invitations to return from WWE brass. 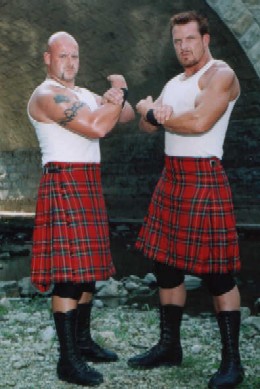 The bright lights of the WWE are a far cry from the drizzling gloom of their homeland. Rory (born Russell Murray) decided to pursue a career in the mat game after growing weary of his life in Scotland. Although he owned a small business and made good money, Rory longed for a change of scenery. Five years ago, he decided to pack his bags and move to Canada, where he met his future wife. He made his way to the Von Erich / Hart Brothers School of Wrestling in Cambridge, Ontario after a brief stint in Halifax. It was there that he met Robbie, and the Highlanders were born.

“The one good thing that came out of there was that it was where I hooked up with Robbie. That was my only reason for staying,” says Rory. “Right off the bat, the first day, we clicked. The next day, he moved me into his house with his wife and family.”

Like Rory, Robbie (real name: Derek Graham-Couch) is also a native Scot. He moved to Canada 17 years ago from Oban, Scotland. He recalls watching wrestling on television and being immediately hooked. Although his goal of becoming a professional wrestler was briefly put on hold a few years ago, he rededicated himself to realizing his longtime dream five years ago.

“It all came to a sudden halt when girls and partying came into play,” says Robbie. “Due to this factor, everything I wanted to do in life didn’t matter. When I stopped partying my perspectives on life became clear again and wrestling and working out became my number one goal in life, and here I am today.”

At the Von Erich / Hart Brothers School of Wrestling, Waldo Von Erich took the young Scots under his wing, schooling them in the fundamentals of the mat game. The determination of both men impressed Von Erich.

“I thought they were pretty good guys,” says Von Erich. “They had a different gimmick. They had the willpower to do it and they wanted to do it.”

To this day, both men are quick to sing Von Erich’s praises. “Waldo doesn’t quite get the credit he was due from his time in wrestling. I believe Waldo did a lot for the business,” says Rory.

Soon after leaving the school, the Highlanders quickly became mainstays at independent shows across the continent. Their gimmick was a hit, and calls from promoters kept pouring in, sometimes as many as three or four bookings a week. Both men are fortunate enough to make a living solely from wrestling.

“The amazing thing with me and Robbie was that right off the bat, we started getting work everywhere,” says Rory. “I can’t think of a promotion we did not work for. If you string a few letters together, we probably worked for them.”

While working for the Massachusetts-based WWA New England promotion, the Highlanders caught the attention of Dr. Tom Pritchard, who was running weekend seminars in the area at the time. They were invited back by Pritchard, who was impressed by their no-nonsense ring style and distinctive gimmick.

“We went for half a dozen weekends and worked with Dr. Tom. I learned more in those six weekends than anything in the past year and a half,” says Rory.

Shortly afterwards, the WWE came calling and the Highlanders were booked for shows in Montreal and Toronto — in singles matches. Sharing a locker room with regular fixtures on WWE television didn’t daunt Rory.

“If you meet one guy in a locker room, you’ve met a thousand. We’re all pretty much the same. We just don’t want to grow up,” says Rory. “We’ve got the best Peter Pan job in the world. We’ve all got the same kind of goals and aspirations. We’ve all got the same sense of humour. Whether it be Triple H or just some random guy on the indy scene, we’re all the same.”

For his part, Robbie felt the call up to the WWE was a testament to half a decade of hard work and determination.

“You know, when you work for something so hard and get to where you wanted to get, it’s quite an accomplishment, even if you aren’t a mainstay,” says Robbie. “Everything about it, whether training with Arn Anderson or meeting Mr. McMahon and having him tell you that you did a good job, is all a surreal experience.”

Robbie and Rory received positive feedback from WWE management following their matches, and have been invited back on a fairly regular basis, appearing on Raw, Smackdown, Velocity and Heat. Although they’ve been used mostly in singles matches, the duo feels that the WWE would be well served to let them showcase their tag team abilities.

“I think tag team wrestling is in a pretty shoddy state right now, I really do,” says Rory. “Tag team wrestling itself is a spectacle. It’s the best art form in wrestling. There can be so much going on, it’s like organized chaos.”

Rory says teams who work well together, like the British Bulldogs or the Bushwhackers, are increasing harder to find in today’s wrestling landscape.

“There really hasn’t been any legitimate tag teams, guys that perform together, work together, live together. You can put two guys that look identical in a gimmick, call them a team, but if there’s no cohesion there, it’s not going to work. It is almost like singles matches in a tag match,” says Rory.

“Today’s tag matches are kind of like four guys just doing singles matches in the tag match,” adds Robbie. “When you get two guys on the same page in the ring, you can have some very exciting action. I think they can bring a different side to a show, as each member can play off one another and be very entertaining to the crowd.”

Despite getting a taste of life in the WWE, the Highlanders still relish the opportunity to perform before dozens of fans at independent shows.

“I think, for some people, there may be an ego kick there. For me, I don’t care where it is, whether it be a WWE crowd or in front of 50 people. I just love the whole interaction with the crowd, because I firmly believe that our job is to make people emotional,” says Rory.

That doesn’t necessarily mean that the Highlanders are content to spend the rest of their careers at local shows across the country. Both men are currently trying to update their looks to make themselves more aesthetically pleasing to WWE higher-ups. While they have the size for the part (Robbie stands 6’2″ and weighs 228 lbs., while Rory is 6’0″ and 236 lbs.) they’re going for a more authentic look, complete with the hides and wild, bushy hair of their clansmen.

“I believe they know we can work or they wouldn’t be asking us back. Although we’re wearing kilts, there’s still nothing that distinguishes us from anyone backstage,” says Rory. “Right now, we’re trying to change ourselves aesthetically, trying to go for the wild man look. I am a highlander legitimately, but just because you are something doesn’t necessarily mean that you look it. I believe that’s something that might make us a little bit better.”

Until they sign a coveted WWE contract, the Highlanders will continue to make their mark wherever they compete. They’re hoping to wrestle in Japan before the end of the year, fulfilling a long-time career aspiration. “I don’t know of anything that would put a bigger smile on my face. I think Japanese wrestling is pretty much where it’s at right now,” says Rory.

In the meantime, Rory and Robbie plan on staying the course to wrestling superstardom.

“As far as our careers go, that’s in the hands of everybody else. That’s in the hands of indy fans, indy promoters, Steve Corino in Japan, Luke [Williams] down in Puerto Rico, the WWE,” says Rory. “We’ll just keep going the way we have for the last five years. If people continue to react to it, then I guess we’ll keep moving forward. We’re just going to keep doing what we’ve been doing.”