Terry Funk honored by his peers at CAC 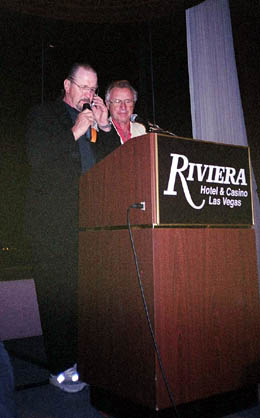 Terry Funk ‘talks’ on his cellphone as Nick Bockwinkel looks on Saturday night in Las Vegas. – photo by Greg Oliver

Executive Vice-President and Co-presenter of what has been dubbed “professional wrestling’s most prestigious award,” Karl Lauer told those in attendance that the Iron Mike Mazurki Award had only been given out 14 previous times and had three requirements: the recipient had to be immediately recognizable, successful in two or more professions (Funk’s being wrestling and acting) and someone who is benevolent.

“Terry is a giver, not a taker,” commented Lauer. “And he’s always been one of the finest wrestlers that ever lived.”

Vice-President of the CAC and also co-presenter, Nick Bockwinkel, spoke next. After some kind words, humor and two playful slaps to Funk’s face, he observed, “(Terry’s) always off the wall. You have no idea what to expect and he’s one of the greatest champions the NWA’s ever had.”

Funk approached the podium only to have his cell phone ring.

“Would you believe this crap?” he asked those in attendance.

It was soon evident it was all a rib as Funk repeated “Si” into the phone several times only to announce to a laughing crowd, “Verne Gagne, we’ve got a challenge here from Chavo Guerrero. Oh, I am so funny tonight!”

Funk then went on to answer the question if given the opportunity, would he relive his career all over again.

“Would I do it again?” he questioned with a smirk. “God, no I wouldn’t do it again. I’d be a Wal-Mart greeter. That way I’d have more money and insurance.”

Funk then got serious and spoke about his and so many other’s love for the business and encouraged everyone to “never let it stop.”

“We all have the same love for a crazy God damn insane business that just magnetizes us and attracts us to one another,” he declared.

He finished his speech by reading a moving dedication from his book and thanking several of his peers including: the women of wrestling who he described as “often forgotten,” Larry “the Axe” Henning, Harley Race, the Vachons and Killer Kowalski.

“It’s a trip I’ll never forget and I never want to end it,” promised Funk.

Other banquet happenings and distinctions: