It’s a bit creepy if you think about it. As you read this, or when you go respond in an online forum or vote in a poll, somebody out there is watching you. It isn’t the omnipresent “Big Brother” that we live in fear of, but the rather more abstract concept of academics. 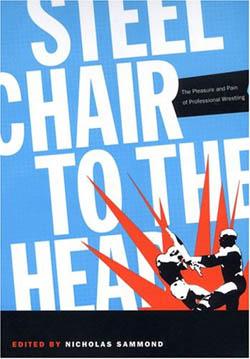 Yes, wrestling is fair game for students, professors and other academics these days. What goes on in the fictional TV world of wrestling is analyzed as are the responses by the fans.

A new book from Duke University Press, entitled Steel Chair To the Head: The Pleasure and Pain of Professional Wrestling is proof that “they” are writing about us. The book is a collection of essays that, in its own words, “provides a multifaceted look at the popular phenomenon of pro wrestling. The contributors combine critical rigor with a deep appreciation of wrestling as a unique cultural form, the latest in a long line of popular performance genres.”

Phew. Quite the mouthful – and quite the read.

Steel Chair To the Head isn’t for everyone. It’s not a basic, entry level wrestling book like something by Scott Keith, nor is it an insider manual like Ole Anderson’s opus. It’s meant for library shelves at university and colleges. To put it bluntly, it’s got a lot of big words. While Mick Foley may have proven that wrestling fans do read, Steel Chair To the Head is proof that there is another level to reading.

Steel Chair To the Head is a truly fascinating look at the sport we love from a couple of steps back. By that I mean that the distance the writers put between themselves and their subject is important because they are studying aspects of wrestling, displacing any passion for it that they may have. Instead of a vitriolic diatribe after the latest Smackdown! broadcast, it’s a detailed analysis of a series of Smackdown! shows and what the writers and wrestlers are trying to “say” on it, what the message that is sent and how it is received.

But before you dismiss Steel Chair To the Head as academic gobblygook, read what Sharon Mazar has to say about “smart” fans, in her essay “‘Real Wrestling'” / ‘Real’ Life:”

Just as they are often nostalgic for the good old days of wrestling, they seem nostalgic for the time when they still believed the fictions presented. They revel in their own deception, and they discuss, sometimes rapturously, the moments when they “marked out,” when they were fooled into believing that the wrestler was injured for real, that the fan rushed the ring for real, that the blood was not from a blade but was for real, that the promoter’s grip over the wrestlers and the matches will slip, that the fight will be more than play, and that they will see the violence for real. This phantom of the real is at the heart of professional wrestling’s appeal. It keeps the fans coming back for another look, keeps them reading into and through performances and predicting future events for each other.

I certainly had never had it explained to me so clearly.

I grew up with Hulkamania, and believed for a while in wrestling, that it was real. But as I grew, and learned that it wasn’t on the up-and-up, the programming did too. Today’s wrestling is meant for a more mature audience, because the audience has matured too. It can’t ever go back to the days of bulldogs, ripped t-shirts and a man who wanted to be a rooster.

Steel Chair To the Head is laid out in such a way by editor Nicholas Sammond that it takes us through those very stages that I went through. It becomes more relevant as you go on. Sammond obviously knows his stuff (Steel Chair To the Head is dedicated to Sputnik Monroe; how cool is that?) and proves it with a good introduction. He lays it all on the line at the beginning: “Professional wrestling is a substantial American popular art form, the latest in a long line that includes burlesque, vaudeville, jazz, rock ‘n’ roll, and punk.”

We start off with the “classic” of the wrestling-as-cultural study, Roland Barthes’ “The World of Wrestling,” which was written in 1957. It’s hopelessly outdated to today’s wrestling, both the in-ring action and the way that the fans behave, but it helps us understand how we got to where we are today. And as academics are wont to do, it’s referenced so many times, you’d think it was The Bible or something.

Then the jump is made to the heyday of The Million Dollar Man and Jake “The Snake” Roberts in the WWF. Again, it isn’t terribly relevant to today’s wrestling (I’d written “how quaint” at a couple of references), but the essay “Never Trust A Snake” does prepare us for the true turning point in the business – “Stone Cold” Steve Austin’s blasphemy and the prophetic “Austin 3:16 says I just kicked your ass” after whupping Roberts at the King of the Ring pay-per-view.

By the time we get to the end of the book, we’re in today’s wrestling, with a great exploration from a fan who is growing into an academic, with insight into the appeal of ECW and the growth of characters like The Undertaker through the years.

To get to that point, there are numerous detours:

There are many parts to roll your eyes at too: the gay fiction linking The Rock up with Triple H; some people bought WWF/E stock to prove their “hypermasculinity”; any attempt to find “logic” in pro wrestling.

But there are far more hits than misses. A few that I circled:

But I want to leave you with a bang-on-the-money take on today’s WWE, from Henry Jenkins IV in “Afterword, Part II.” He is a fan first, and wrote the piece while still in university. (Also contributing a couple of pieces is his father, Henry Jenkins III.) More than anyone else in the book, Jenkins IV is “us” – the fans.

“Although I couldn’t figure out how he’d done it, I knew Vince McMahon had pulled off the grandest bait and switch in business history,” he writes. “We started watching a kids’ show, and the next thing we know it’s a striptease. But how did he do it? Such an unprecedented transformation deserves careful study.”

Amen. And it you want to study, there’s no book out there quite as a broad-ranging as Steel Chair To the Head.