Youth sweats it out in Vegas at CAC

LAS VEGAS – The Riviera Grande Ballroom reeked of aspiration and perspiration all day Thursday and Friday. 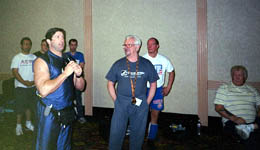 Rico, ex of WWE, drops by to inspire the trainees on Thursday in Las Vegas. – photo by Greg Oliver.

Approximately 40 hopefuls ignored the charms of Sin City and gathered around a makeshift ring the past two days for a wrestling seminar put on by greats, Les Thatcher and Harley Race. This is the third year the Cauliflower Alley Club has included the tutelage as part of its annual reunion.

According to Thatcher, all participants are required to have at least one year of professional wrestling experience. It was an eclectic mix. Women. Men. All shapes and sizes. Some were awfully green. Some were overly cocky. Some were intimidated. Hard not to be with the likes of Bob Orton Sr., Nick Bockwinkel, Penny Banner and Ox Baker in the audience looking on at the future of their sport.

One enthusiastic participant, who just happened to be the sole Canadian involved in the seminar, was Nathan Burke. The 29-year-old from Maple Ridge, B.C. stood out in his black ECCW t-shirt and funky blue, yellow and white trunks.

“This is phenomenal,” declared the lithe blonde. “No one ever knows everything about professional wrestling. There is always more to learn. Plus it is just a privilege to be in the same room as Les Thatcher and Harley Race.”

An instructor himself, Burke plans on taking all he has learned back over the border and applying it to all his students.

The highlight of the seminar on Thursday, which lasted about seven hours, was when Thatcher divided everyone into tag teams and picked who were the heels and the babyfaces. An opportunity that allowed many to take on unknown personas and work with wrestlers they had never met before. A remarkable and intriguing test to say the least.

The teams were given six minutes to have a match with instructions that the heels were to always go over. Afterwards, they were critiqued by both Thatcher and Race.

After several matches kept having the heels dominating for five of the six minutes, a fed up Thatcher and Race offered some stern advice and warned their pupils to start listening.

“We’re not trying to hurt your feelings, we’re trying to make you better wrestlers,” offered Thatcher. “We are all being generous, benevolent and very calm with this today.”

Their words seemed to make an impact as the evening concluded with a highly praised women’s tag match followed by what was dubbed by many as the best match of the night. A moment that had Thatcher almost at a loss for words, which I’m told is a first.

“Gentlemen, this is frightening to me, but I think I just saw a tag team match,” he commented.

The evening closed with Thatcher saying that 30 of the best workers would be picked to put on a show on Saturday.

Someone hoping to be included for that show is 19-year-old Jack Manley. Originally from Alaska, Manley moved to Las Vegas two weeks ago hoping to continue his wrestling training.

“I’ll continue this as long as my body holds up,” he promised, although his slim chest was already showing signs of scrapes and bruising. Manley was hastily making notes in his notebook trying to remember all the comments Thatcher and Race had made.

Clad in a grey t-shirt that reads, “If you’re big star bound, let me warn you, it’s a long hard ride,” Thatcher is exhausted after the seminar and ready for a beer, but you can’t wipe the smile off his face. He lives for this.

“One of the problems today with the independent wrestlers is that they try to teach other or by watching tapes,” he observed.

Because of the intricate nature of professional wrestling, Thatcher feels that seminars like the one here in Vegas allow young wrestlers to expand and develop their skills as they should be done — over time and with the instruction of people who have been at the top like he and Harley Race have.

“It’s just like if you wanna climb Mount Everest, you must go to someone who has climbed that mountain before to teach you how,” he said.

In his opinion the seminar, is beneficial to him as well. It allows him to give back to the business and if any of the students end up doing well, he’s filled with a sense of pride.

As for what elements he is looking for in the talent he chooses for Saturday’s show, Thatcher said it is simple.