The list of accolades for AJ Styles is a mile long. One of the most respected and well-liked wrestlers in the world, he is a former TNA Triple Crown winner and has won titles around the world. He is about to embark on his biggest challenge to date – fatherhood.

“I am nervous, mainly because I don’t know if I will be there for my son’s birth. It’s exciting, I can’t tell you how it has changed me already,” Styles, who expects to name his son AJ, recently told SLAM! Wrestling. “I want to be there for his birth. If you have kids you know what I am talking about. I am doing everything I can to get him out because I need him to come now. I have the wife walking in heels, doing grass drills, anything I can do to get the baby to come out. But I she is going to screw it up, I know she is.” 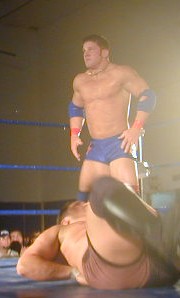 For many wrestlers, balancing parenthood with being a wrestler is difficult but Styles feels up for the challenge.

“I enjoy being at home and it’s going to get a lot worse when I have a baby that I am missing. But here is the flip side, when I am not on the road I am at home all day long. As of right now I work weekends and every other Tuesday, but there are weeks where I am at home Monday to Thursday. I think that is pretty good, four whole days with my kid. Plus my wife is a schoolteacher. We timed it out that once she has the baby she is done for the summer. Everything is working out well, and I will get to spend a lot more time with my kids then a guy like Ric Flair had to wrestle every day.”

AJ hopes that his child will grow up understanding why his dad is on the road.

“Everyone has a job, and mine is pro wrestling. I will be away a lot and that sucks but when I am home I will be with my kid and wife. My son will have to understand that this is Daddy’s job, how he gets clothes and food. I am not saying my job is more important then my family, but it’s how I support them. It’s God first, family second and then my job. This is the same thing that kept me from taking the WWE deal that was offered.”

Styles is also well prepared for someday if his son wants to follow in his father’s footsteps.

“He will have to attempt to college first and hopefully will take after his mother as far as his brains is concerned. I hope if he does wrestle will be smart enough to have an education regardless of what he wants to be, so he has something to fall back on. If he wants to be a wrestler that is fine with me, but if he does want to wrestle he will be a cruiserweight because I am not a tall guy and my wife is 4’10”. Maybe I will be put him in gymnastics just in case.”

While excited about his first born, the Gainesville, Georgia resident isn’t letting it distract him from his match this Sunday at TNA’s “Lockdown” event, where he will headline the show against Abyss. While Styles feels having all of the matches in a cage is stupid, he is determined to offer fans something different when he and Abyss hit the six sides of steel.

“God only knows what to expect that night. Abyss and I really wrestle well together, it is going to be very entertaining. Abyss is one of the best big men in the business, I can’t wait as he is a pleasure to work with. There are few people I would rather be in the ring with than Abyss.”

Styles isn’t feeling pressure of having to cap off the show in the main event in front of a burned out crowd.

“It will be about psychology, we will tell a good story. By the time Abyss and I get out there everything will have been done, so we will have to tell a different story. It is all we can do, hopefully some of what we have won’t be done in a different match.”

For many fans, it is talent like Styles, Daniels, Petey Williams, Chris Sabin and others that are the reason they order the pay per views. It is flattering for Styles to hear that.

“It makes us feel important, I hope that TNA realizes that as well. We try to do something that you don’t see anywhere else, its not just high spots its psychology and people forget that. It separates us from other wrestlers is we know how to put on a match with a bit of everything.”

Styles recently faced off against Daniels in an iron man match that saw the Orlando crowd chanting “This is awesome.” It’s a chant that has followed Styles and other wrestlers to other promotions as well.

“It makes you appreciate what you do. Sometimes you don’t know if you are a good wrestler. To hear a whole arena chanting that, that tells me they are fans of wrestling and they appreciate us going out there and busting our butts to make sure they get what they want. It’s indescribable.”