In the beginning, Randy Baer created his website for fun. But little did he know that the site would become so popular that it would lead to two successful books, force him to adopt another name, and popularize the word “crap” in the wrestling community. 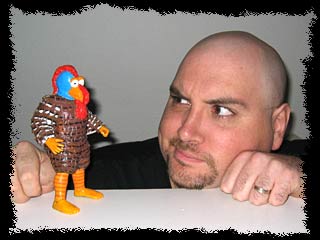 Indeed, the joke turned into reality.

In April 2000, Baer teamed with good friend Merle Vincent to create a website, which they entitled Wrestlecrap. The site was dedicated to what they felt was the very worst in professional wrestling. If there was a bad gimmick, a bad angle, a bad anything to do with wrestling, chances were that Baer and Vincent would have it on the site.

Since its early beginnings, Baer’s site has grown in leaps and bounds. When he’s not interacting with the fans, Baer finds himself watching today’s wrestling and shaking his head.

“It sucks. It’s in a funk, and I don’t mean that in a good Terry Funk kind of way,” Baer told SLAM! Wrestling. “It kills me that every week is the same old, same old.”

Baer, like many fans today, is upset with the current direction WWE is taking. “It’s harder to be a fan now than anytime since I started watching in the mid-’80s,” he said. “I mean, even in the early ’90s, things were horrible, but they were a funny horrible. These days it’s just really hard to get excited about anything.”

The 36-year-old Indianapolis resident is happy for the success that he and the site have enjoyed. “What happened is, I wound up with a lot more friends than I started with, and for that I’m very very blessed.”

One of the popular features on the Wrestlecrap website is R.D.’s Mailbag, located within the R.D.’s Ramblings section. But wait, who is R.D.?

“R.D. Reynolds, Randy Baer, same person. I used to manage for an independent group, and when I turned heel, the 20 or 30 people watching knew my name, looked it up in the phone book, and started leaving nasty messages on my home phone,” Baer recalled. “When I started with the Wrestlecrap site, I decided to stick with R.D. Reynolds, because maybe it would draw an extra person or two to the shows I was doing, and now more people know me by R.D. Reynolds, and that’s why I go with that.”

In what seemed to happen overnight, Baer began receiving mass amounts of emails from fans regarding the Wrestlecrap website. Baer didn’t use the mailbag or anything else to judge how popular his site was, but he instead looked up the web traffic to see the official number of hits. “I remember very vividly Merle and I checking the web traffic, and in our first month we got 2,000 hits, and we were excited, but we get that now in two hours on a Friday morning,” Baer said. “It was very different, and we thought it was very neat. Merle was just like me, he just wanted to entertain people and make them laugh. If it’s 10 people we’re making laugh, that’s great, if it’s 10,000 people we are making laugh, that’s even better.”

With Wrestlecrap‘s fan base expanding, Baer decided to contact the people at ECW Press and pitch a book. Wrestlecrap: The Very Worst of Professional Wrestling was born a short time later.

“The first person I showed the book to was my wife, and I just couldn’t believe I was able to con somebody into paying me to write a book with the word ‘crap’ in the title,” he laughed. “To me that was the greatest achievement I could ever possibly achieve.”

Baer was in a whirlwind of emotions as he saw his first book. “When I first saw my book, I was happy with the job ECW Press did, they didn’t really mess with what I had to say, and that’s one of the main reasons why I wrote a second book with them,” he said.

With the excellent reception of Wrestlecrap, Baer and ECW Press decided to work on another project, that being The Death of WCW. This time Baer co-wrote the book with Bryan Alvarez. “I was a Figure Four Weekly subscriber, that’s Bryan’s newsletter, and I found that he’s just so funny and so knowledgeable, and his newsletter usually arrives on Saturday, and if I go to the mailbox and it’s not there, I get depressed. I just thought that he was so talented, and that he could easily write a book.”

Baer was willing to share his byline with Alvarez, but not R.D. Reynolds, who had taken over his life and gotten co-credit for the first book. “For my own ego, I wanted my own name on the book,” he said, “and there was a long discussion going back and forth with ECW Press, and for whatever reason, their marketing department decided to promote me as two different people.”

With The Death of WCW, Baer attempted to reach a different audience. “With the first book, I wanted it to be more general, and be something that someone with no knowledge in wrestling could grasp,” he said. “I pictured my mother, who has no idea about wrestling as being my target audience. When I wrote The Death of WCW, I knew the target audience was going to be different. It was going to be more hardcore wrestling fans.”

Baer knew his audience, and judging on responses from his previous book, he knew what the fans wanted to read, and what type of read they would enjoy the most. “With the first book, the hardcore wrestling fans didn’t think I was in-depth enough and that there wasn’t enough behind-the-scenes information,” he said. “My goal for the second book, was to make it something that the hardcore fans would like, and bringing Bryan on board really helped me to accomplish that.”

The success of both books have taken ECW Press by surprise, according to the book’s publisher, Jack David. “I was astonished at the response to Randy’s books,” he said. “Sure, they were well written and entertaining, but they flew off the shelves, and there seems to be no slowing down. Wrestling fans love original, well-researched, humourous books, and these two books prove the case.”

With two books already under his belt, Baer plans on doing another book, with Alvarez once again being his co-writer. “ECW Press is very interested in doing another project, and I am too as long as it’s the right project,” Baer said. “I’ve written the two books I wanted to write, Bryan and I want to do another book, but we want it to be something that will make people go ‘Wow.’ We want the next book to be about something we both feel strongly about, and we want it to be worlds better than the other two.”

No matter how bizarre the stories Baer tells may be, his very own story is even more out there. Going from being a wrestling manager for a small independent group, to creating a website that built an enormous following, to becoming a best-selling author, Baer is living his dream. “I just want to say thanks to all the people who supported me,” he said. “I am truly very blessed.”

CHRIS SOKOL is from Long Island, NY and is awaiting his copy of The Death of WCW.