‘WrestleCrap’ is full of crap

Remember when you were sitting back watching Wrestlemania 9 and you had to endure a match between a bleached blonde-muscle bulging-surf dude and a green-haired clown? Just when you thought things couldn’t get worse, in the middle of the match another clown springs up from under the mat. According to R.D. Reynolds, this kind of cheap trick is what’s known as “WrestleCrap.” 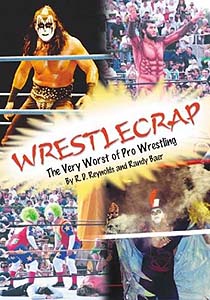 In his new book from ECW Press, WrestleCrap: The Very Worst of Pro Wrestling, Reynolds recaps some of the worst gimmicks and storylines ever created. In doing so, he does go all the way back to the sixties but the focus of the book is WWE and WCW during the eighties and nineties. That’s part of the problem. Reynolds doesn’t even take a glimpse at ECW’s contributions to “WrestleCrap” including the infamous kidnapping the Sandman’s son by Raven. Nor does he mention the copy cat antics of the Blue World Order (BWO). He talks about McMahon stealing AWA wrestlers to start his monopoly but he doesn’t mention any of Verne Gagne’s experiences with “WrestleCrap.” Isn’t that where Jesse Ventura first appeared with his boa?

This book should come with a warning too. If you are a Hulk Hogan fan or admire Vince McMahon, this is not the book for you. Also, if your eyes are sensitive, you might some of the language a little harsh. I, personally, found it odd that someone who was ripping wrestling’s’ greatest promoters for using stupid antics to boost ratings would swear so much just to make his feelings felt in a book.

What I found more odd was that I went from laughing out loud to wondering what heck he was trying to say. I couldn’t figure out if he was teaching us about “WrestleCrap,” movie plots or wrestling history. What a mess.

The book starts off with a forward by John Tenta. Most wrestling fans would remember him as ‘Earthquake’ in the WWE or ‘Avalanche’ in WCW. In the introduction, Tenta talks about some of the dimwitted gimmicks he had to portray, like the ‘Shark’ and ‘Golga,’ one of the Oddities. Tenta’s introduction seems almost apologetic. It starts out being quite hilarious and then becomes somewhat somber. I came away from it feeling kind of sorry that he had to portray those personas to support his family.

Reynolds followed up with a great explanation of what he believed “WrestleCrap” is. He reminded me of some of the most horrific storylines such as the mysterious ‘Survivor Series’ egg that turned out to be the ‘Gobbledy Gooker’. McMahon thought it would be good to have a great big turkey lock arms with Mean Gene Okarland for a square dance? Reynolds also touches upon some of the more memorable hated creations such as the ‘Goon’, the fake ‘Diesel and Razor Ramon’ and of course who could forget…’The Red Rooster’.

After the first quarter of the book is done and over with, it just becomes a recycled story about backstage politics and the great ratings war between Nitro and Raw. After all, a wrestling book can’t be a wrestling book without mentioning the Clique and their influence on McMahon.

In the biggest blunder of all, Reynolds forgets that he’s a wrestling writer and becomes Roger Ebert. He proceeds to go over almost every movie Hulk Hogan ever made and then list reason after reason why you should not watch them. To some, Hogan’s movies are crap but the films themselves don’t fit Reynolds’ definition of “WrestleCrap” as they really have nothing to do with the pro wrestling industry itself.

Reynolds mentions The Undertaker’s and the Ultimate Warrior’s gimmicks as being ‘WrestleCrap’ too. That’s just wrong. I don’t think anyone can consider gimmicks, which brought a company millions of dollars in profits and lasting well over a decade to be crap. Plus, if you’re going to mention gimmicks that looked like crap on paper then turned out good, why not mention a “Rocker” turned “sexy boy” or how the Undertaker’s brother came back after he was supposedly killed in a fire?

For any new fan, this is a great book for you to pick up and brush up on your wrestling history but for any fan that was actually interested in reminiscing on some of the crappiest plots to be written and has been watching pro wrestling well before the nineties, this book just doesn’t cut it.